Accept
TOP  >  BE FORWARD News  >  What is Toyota's Prototype City of The Future, "Woven City"? 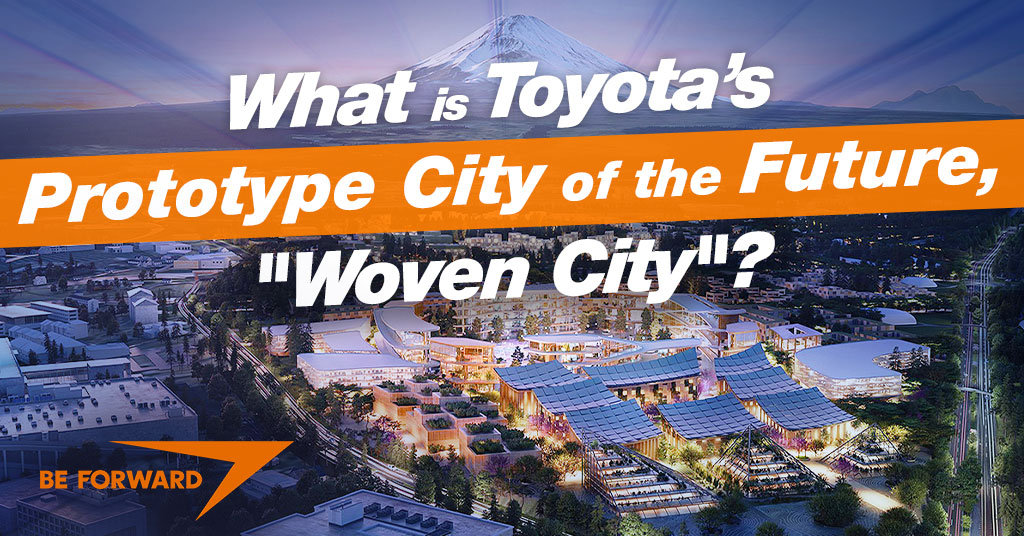 Have you ever wondered what a city in the future will be like? We already have a glimpse of what a car will be like in the future such as the autonomous car and flying car. But what about a city? A city that connects the people, technologies, and ecosystem, isn’t that an amazing place to imagine? Well, it is still in the process of being developed but here it comes, the Woven City. The city of the future with flying cars along with self-driving cars, robotic technologies, artificial intelligence, high-speed internet, and fully sustainable with environmentally-friendly fossil fuel. Now that is a good place to live in because after all, who wouldn’t want to live in a city where we can fully connect to the virtual world. So let’s talk about this city of the future, the Woven City.

What is the Woven City & Its Purpose?

Before we think far ahead let’s first talk about this Woven City. What is the Woven City and what is its purpose? According to Toyota’s recent press release, the Woven City is a prototype city that is being developed by the Toyota Motor Corporation and the Woven Planet Holdings. It is a real-life laboratory city where people can live, work, research, and test the latest innovative technologies. A place to develop and maximize the potential of the latest innovations combined with environmentally-friendly fuel cells.

The people, vehicles, buildings, and technologies will be connected through sensors and data which can further advance the full capabilities of both the digital and real world. The city is like a combination of advanced technology, robotics, smart homes, autonomous innovations, and artificial intelligence. Also, it will be powered by hydrogen fuel cells which are said to double down the carbon emission and subsequently will help Mother Earth in the long run.

The Woven City will not be just a city of innovations but also be part of human diversity and evolutions. We haven’t seen all the best that technologies can give, but in this city, we will have more capabilities to explore and develop the virtual world. So, who wouldn’t want to live or visit a city that we only see in movies or just imagining in our minds? Though only a prototype it is still a city that everyone will think of in the future.

The location of the Woven City was already announced by Toyota and it is a perfect place to build a special city like the Woven City. As stated by Toyota, the location of the Woven City will be built and developed on a 175-acre base of Mount Fuji in Susono City. It is one of Toyota’s former manufacturing plants, the Higashi-Fuji Plant, near the central Hoshu island of the Pacific Coast which is about 62 miles from Tokyo. The Higashi-Fuji Plant which manufactured thousands of cars during its days drew its closure last December 2020 and what is a better way to use the former manufacturing plant than to have the city build on its history? The history of the manufacturing plant won’t just be gone but will be part of a much more important role in the community and the advancement of technology.

The Woven City will be fully connected to our ecosystem by using hydrogen fuel cells to fully sustain the city. Also, the building will be made mostly by Japanese woods along with robotic processing design to minimize the carbon footprint as well as the use of the photo-voltaic panels in the rooftops to deliver solar power in addition to hydrogen power. The Woven City will include three types of street designations: for drivers, for bike lanes or other personal mobility users, and last, for pedestrians park-like walking place. There will also be lots of autonomous electric cars to deliver parcels or transport goods throughout the city.

Who can live in the “Woven City”?

Maybe some of you already want to ask who can live in the Woven City. Well, as stated by Toyota, 360 people including inventors, young families with children, and senior citizens are the first to move into the city within five years. But eventually, it is expected to house more than 2000 Toyota employees with their families, scientists, industry partners, researchers, retailers, and retired couples.

They will develop and test a variety of innovative technologies including robotics, Artificial Intelligence, autonomous techs, smart city homes, and help demonstrate a human-centered diversity towards community advancements. It is still in the process of being developed and a lot more ideas will come up as it goes to completion and surely it will be a successful project when it is all done. After all, it is a city where innovation keeps growing and developing, all for the advancement of the people and the future.