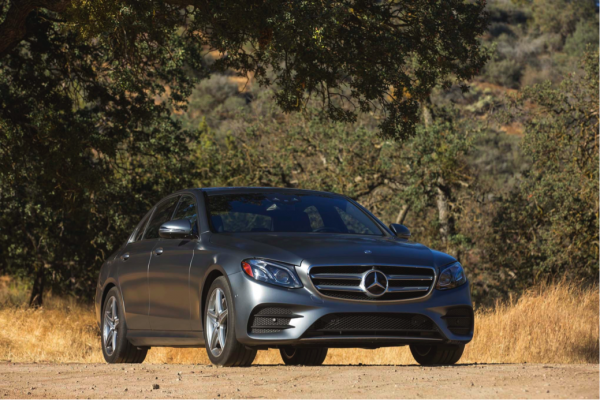 In the not-so-distant past, most large luxury cars were powered by hefty eight-cylinder engines. Those throaty, meat-mashing powerplants ate pavement and shat attitude. When a driver pushed the pedal, petrol flowed and torque pulled. The day of the V8 is waning as manufacturers strive to meet emissions and fuel efficiency mandates around the world. As the 2012 models were being unveiled, many were powered by turbocharged four bangers trying to push heavy luxury models around the world’s highways and byways.

Two popular models that have succumbed to the push toward turbocharged fours were the 2012 Volvo S90 T6 AWD Inscription and the Mercedes-Benz E300 Sport. The Volvo is powered by a four-popper that is dual charged. The engine is fed by a turbocharger and a supercharger. The Mercedes-Benz relies on a single turbocharger for aspiration. Let’s have a look at how the two stack up under the bonnet and on the road. 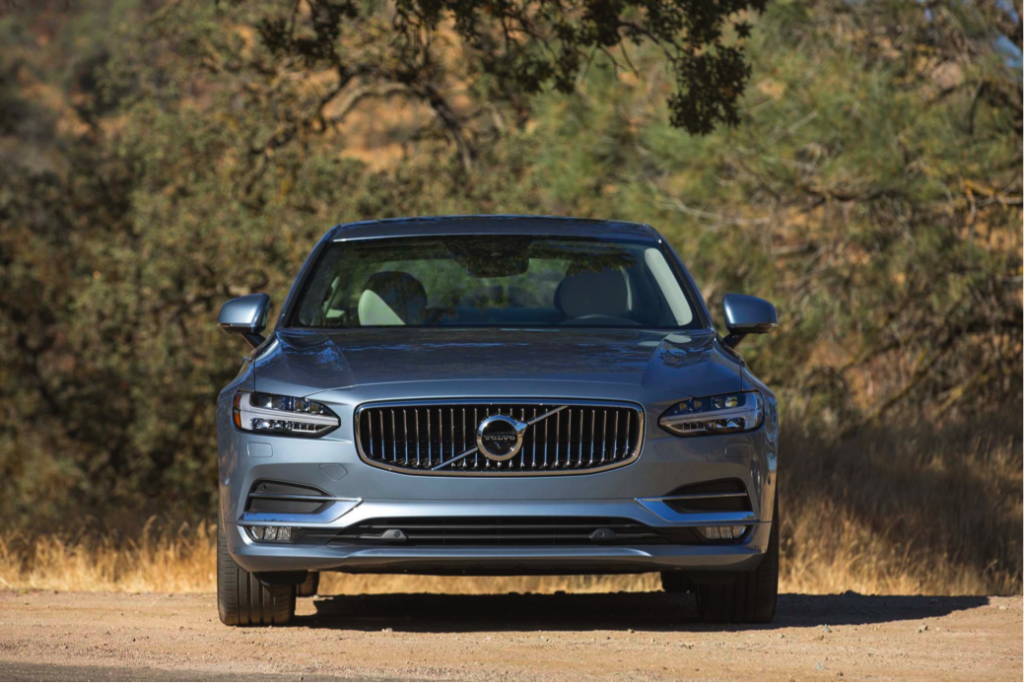 Riding on the same platform and featuring the same powertrains as the Volvo XC90, Motor Trend magazine’s 2016 SUV of the Year, the S90 comes into this comparison with plenty of expectations riding on its shoulders. To see if the S90 falters or shines, you have to look in the most logical place first…under the bonnet.

After Lifting the Bonnet…

You will find a prime example of how to provide power sans eight cylinders. The large I4 is supercharged to provide plenty of power as the turbocharger winds up to speed for high rpm blasts. The combination provides 316 bhp and 400 N-m of torque. That power is delivered to all four wheels through an outstanding eight-speed automatic gearbox. The powertrain is good for a 0-100 km/h time of just 5.6 seconds. While that is not going to help you pass a Ferrari, it is darn good for a heavy luxury car. Besides, if you wanted to pass Ferraris, you would buy a Ferrari or Koenigsegg, maybe an Ariel Atom… lots of things other than a Volvo. Once you were at 100 km/h you can brake to zero again in just 32.5 m. According to Scott Evans, associate editor at Motor Trend, the Volvo S90 Inscription offers ”Excellent power delivery from this twin-charged engine.”

If you were buying a luxury saloon, you most likely want everything to go smooth once you push the pedal. The S90 offers a smooth power curve and refined shifting from the eight-speed gearbox in most circumstances. The Dynamic mode is the exception. The gearbox seems to buck being hurried.

The S90 handles just like you would expect a Volvo to… more than adequate, but less than exhilarating. The rough spots in the pavement were easily conquered by the S90’s rear transverse leaf spring setup. The leaf spring also cancels most of the body roll. On the downside, the large wheels of the S90 tend toward more cabin noise than you might like in a luxury vehicle.

The S90 Inscription features semi-autonomous driving through Volvo’s Pilot Assist system. The built in lane keeper, pins the S90 to the center of the road, whether it is straight or curvy. The radar cruise control keeps you at speed and leaves a proper distance between other vehicles. The system does get a bit dodgy if you were not on a well-marked roadway, though.

As you sit behind the wheel, you will enjoy a beautiful and endearing cabin space that is both roomy and driver-centric. As with all Volvo offerings, it is minimalistic, yet opulent. Full of leather, wood, and metal, you may want to just sit and ”feel” the interior. Volvo’s Sensus infotainment center packs a veritable tonne of features and is intuitive to a degree that is unexpected to say the least. 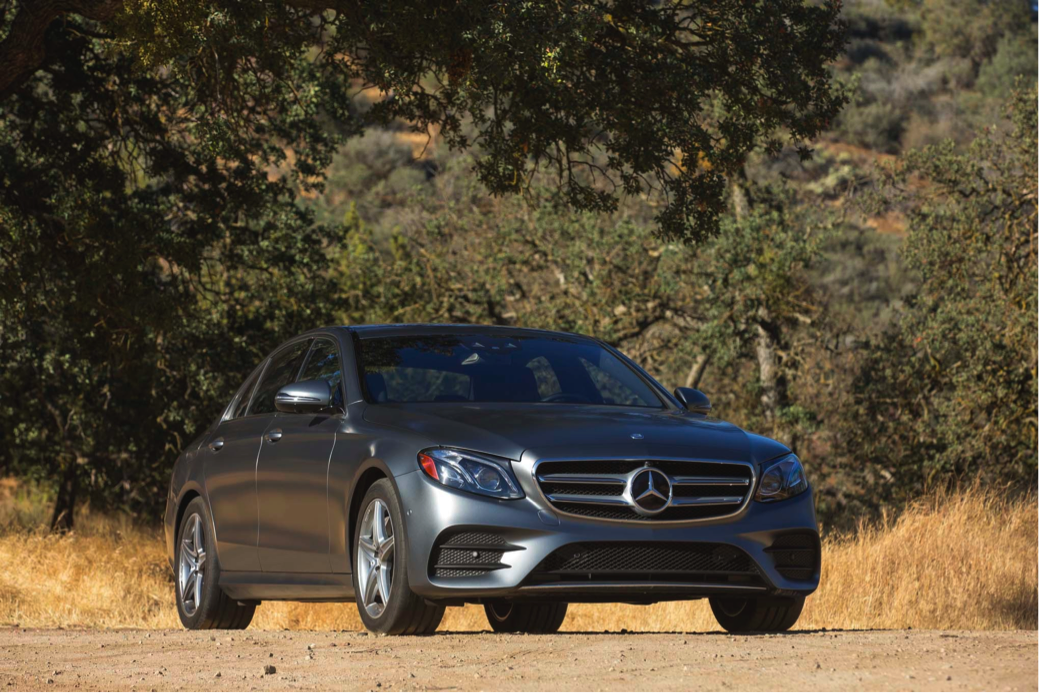 Mercedes-Benz has long held the torch in the modern midsize luxury saloon segment. The 2012 E300 is ongoing proof that Mercedes wants to keep a firm grip on its place and can remain competitive in an increasingly crowded market. Mercedes’ plan of attack is to shrink the S-class, then toss in its new Drive Pilot system for fun. Let’s peek under the bonnet, shall we.

Pop the bonnet and you will find a turbocharged I4 that provides 241 bhp and 370 N-m of torque; 75 bhp and 30 N-m less than the Volvo S90 above. The powerplant pushes its ponies through a nine-speed automatic gearbox. The combo manages a 0-100 km/h time of 6.5 seconds, nearly a full second slower than the Volvo S90. When you have the E300 in Sport mode, it will drop from 100 km/h to zero in the same distance as the Volvo

The idea of a nine-speed gearbox is terrific. It should provide seamless shifting that amazes a driver, right? Unfortunately, that is not the case in the E300. After test driving one, Motor Trend’s technical director Frank Markus said, ”This transmission seems to get discombobulated and gave me some very hard shifts; its logic wasn’t terribly great, either.” He went on to say the engine seemed to run out of steam while passing at highway speeds; a fact he attributed to poor gearbox ratio decisions.

The E300’s Sport mode makes it easy to handle in corners, even when you come in hot. It also lessens the E300’s ride quality and increases cabin noise. Body roll is nearly non-existent even at high G’s.

Sitting inside, you have a level of comfort that falls short of Mercedes-level expectations. The wood grain and faux leather were obvious cost-cutting measures that may convince a first-time buyer, but no one else. Granted, you can opt to upgrade the interior, but you were going to take a massive hit to your wallet. Even if you upgrade several trim levels, you cannot avoid the small rear seating space. Seriously, did Mercedes opt to design the rear space around someone who only stands 1.5 m?

The tech in the E300 is pretty good. It features the latest version of Mercedes’ COMAND infotainment center. You access the system through an enormous touchscreen atop the center console or on the steering wheel. On the downside, the system requires a long learning curve. The problem is trying to use the system from the steering column with your left and right thumbs. Then there is the Drive Pilot system. It combines radar cruise control, lane keep assist for self-steering, automatic lane change, and a plethora of other technologies. The radar cruise system will maintain speed well and a proper distance behind the car ahead at any speed. The lane keep system works for the most part on well-marked roadways. Overall, test drivers have found the Drive Pilot system to be inconsistent, though. The inconsistency arose from dirty sensors that would shut the cruise system down and the lane keep system would fail if the Sun was glaring into it.

Overall, the 2012 Volvo S90 T6 AWD Inscription is the better choice. It offers more power, a better shifting gearbox, and higher-quality interior trim. If that isn’t enough, then consider that the Pilot Assist system is far superior to the Drive Pilot found in the 2012 Mercedes Benz E300 Sport. Want more reasons? The Volvo allows larger passengers to relax in its spacious rear cabin space and the price point is around L3,000 less than the E300’s.