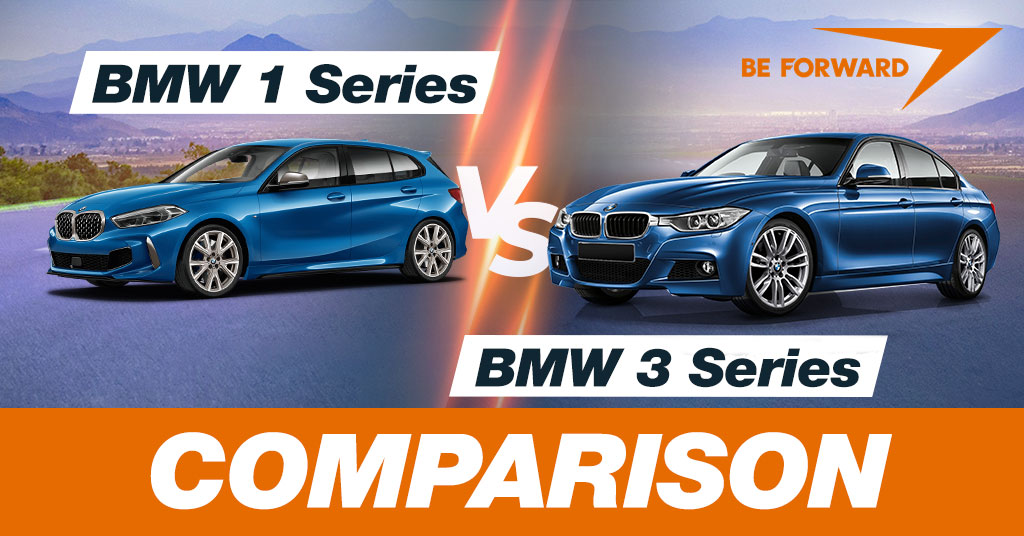 The BMW 1 Series is a small hatchback (Supermini) produced by BMW since 2004. Today we are going to compare it with its older executive brother the BMW 3 Series that has been around since 1975. We are going to compare their engines, body types, exterior and interior features, plus their practicality.

The interior of the 1 Series cannot be mistaken, it’s that of a true BMW, very well finished with a sporty theme. The center console is a bit angled towards the driver with an 8.8-inch screen at the top of the dash that is equipped with BMW’s native iDrive infotainment system that gives access to a range of content such as vehicle settings, journey data, video entertainment, servicing, tire pressure, music, navigation, and more. Connecting features such as Bluetooth, smartphone syncing, and others are also included. The iDrive system can be operated via the touchscreen or the rotary dial on the center console.

The 1 Series has several storage compartments and a boot that can hold up to 360-liters with the rear seats in place, and 1200-liters with seats folded down.

At the front, the 1 Series features a horizontal long bonnet that tends to make it look larger than it actually is, accompanied by the large kidney grilles and sleek xenon headlights with LED daytime running lights.

Other external features include fog lamps, chrome exhaust tips, and alloy wheels. The Sport and M Sport models have some other extra features and tweaks.

The BMW 3 Series is available in two trims, the 330i and the 340i. You can choose from the three available body styles namely the sedan, Sports Wagon, and the Gran Turismo (hatchback-style). The 3 Series’ interior is lavish and stylish with synthetic leather upholstery and power-adjustable front seats as standard, while on the high-end trims you get genuine leather upholstery, heated front, and rear seats, and a heated steering wheel. The front seats are comfortable and supportive with plenty of head and legroom, enough to fit even the tallest adults, a feat that applies in the rear as well.

Other features depending on model and trim include BMW’s Live Cockpit Professional with a 12.3-inch display, a large head-up display that displays speed, route instructions speed limits, warning indicators, navigation data, and more onto the windshield. On the center console, you find the iDrive knob, driving modes button, and engine start.

The 3 Series is available in 3 body styles. The Sedan, the Sports Wagon, and the Gran Turismo. The Sedan as the name implies is just a normal sedan body, the Sports Wagon has a Wagon style body with plenty of interior space, while the Gran Turismo features a hatchback-like body offering plenty of interior luggage space. All these models come with 18-inch alloy wheels and LED headlights.

The 1 Series is fitted with one of the below engines.

Power to the wheels is transferred via an eight-speed automatic or six-speed manual transmission.

The BMW 3 Series comes fitted with the below engines.

Power to the wheels is transferred via an 8-speed automatic or 6-speed manual transmission.

The BMW 1 Series and 3 Series are highly relevant cars in their respective categories as they are by far excellent cars in many respects. They both feature some turbocharged engines which are efficient and modern, with generous equipment levels even on standard models. The 1 Series and 3 Series are rear-wheel drive as standard, and this makes them drive beautifully. Their interior finishing is plush, but as expected the 1 Series is not as plush as the 3 Series, the 3 Series is an executive car, and executive cars are built to be plush. The 1 Series is much smaller than the 3 Series, and these two models were built to cater for different functions, so if you need a car for urban use, then go for the 1 Series, but if you need something exclusive and spacious, then the 3 Series will be a great choice.

ALL BMW 1 SERIES FOR SALE

ALL BMW 3 SERIES FOR SALE