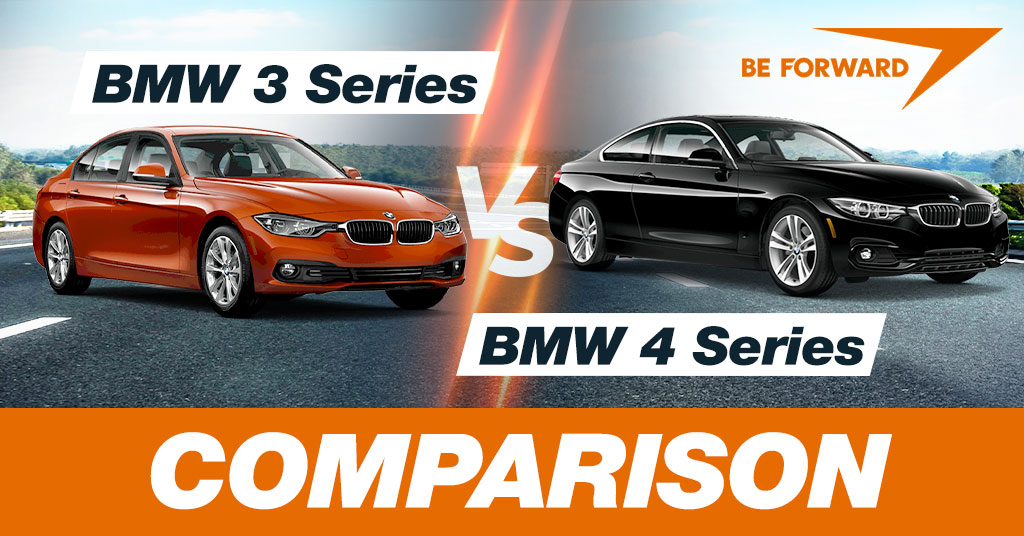 BMW is a German car manufacturer that is known for manufacturing premium cars. The 3 Series for many years has been its most popular model, especially for saloon buyers. Recently the 3 Series has received some competition from within, in the name of the 4 Series. We are going to take a look at these two cars by taking a look at their interior, exterior, engines, and practicality hoping to assist any person who is or will be in the market looking to switch from one model to the other.

The BMW 3-Series is thoughtfully designed with a handsome interior, quality materials, and multiple body styles. The 3 Series is available as a sedan, wagon, and Gran Turismo (a sedan with a hatchback rear design) with each having five seats. The front and rear seats are cozy, comfortable, and nicely padded. The head- and legroom are good enough even for the tallest of occupants.

The BMW 4 Series is very well designed with some premium finish and a spacious interior.

The 4 Series Gran Coupe is a 4-door 4-seats hatchback, while the convertible and coupe are 2-door 4-seats cars. The power-adjustable front seats and the rear seats with standard synthetic upholstery (leather upholstery is an option) are roomier for most tall people to fit in comfortably, except for the coupe and convertible body styles that have their rear seats a bit tight, and accessing the rear seats of the 2-door models is a bit challenging. The front seats are excellent, they’re wonderfully supportive and comfy with options for side support.

The 4 Series comes with a basic 6.5-inch display, a 9-speaker audio system, HD Radio,  Bluetooth, and a USB port as part of the infotainment system and BMW’s iDrive system with a central rotary dial controller and hot-key buttons. You have the option to upgrade the infotainment system with an 8.8-inch screen, a 16-speaker Harmon-Kardon surround-sound system, Apple CarPlay, satellite radio, a Wi-Fi hot spot, wireless phone charging station, a touchpad controller, navigation, parking cameras, and a heads-up display.

The 4 Series has several storage compartments such as the glove compartment, door pockets, front seat pockets, and a central deep pocket. For the cargo space, the Gran Coupe offers 481-liters behind the rear seats and 1300-liters with the rear seats folded. The coupe has a 445-liter boot. The convertible has a 371-liter boot with the top up and reduces to a 221-liter boot when the top is down.

The 4-Series is available in 3 body styles namely the coupe, Gran Coupe (a four-door-sedan variant), and convertible. The front features sexy-specs LED headlamps and dual round light-pipe daytime running lights with hexagonal frames, that horizontally touch the grille. At the back, the 4 Series is fitted with full-LED taillights with wider amber turn signals and outboard reflectors.

The BMW 3 Series is fitted with a choice of the below engines.

Power is transferred to the wheels via an 8-speed automatic or 6-speed manual transmission.

The BMW 4 Series is fitted with a choice of the below engines:

Power is transferred to the wheels via an 8-speed automatic or 6-speed manual transmission.

Many people can’t tell the difference between the BMW 3 Series and the BMW 4 Series. In this article, we have tried to tell the difference and we conclude by saying, the BMW 3 Series has a sportier 2-door coupe, 4-door gran coupe, and convertible siblings by the name of  BMW 4 Series. But although they have similarities, they also have enough differences to justify the name change. Unlike the 3 Series, the 4 Series comes fitted with a top-drawer engine with great performance, fuel economy, with some great rear-wheel-drive handling.

As part of  BMW’s range expansion plan, the 3 Series Coupe and Convertible were extended by providing the Coupe, Convertible, and Gran Coupe models and gave them the BMW 4 Series name signifying their sportier nature.

ALL BMW 3 SERIES FOR SALE

ALL BMW 4 SERIES FOR SALE