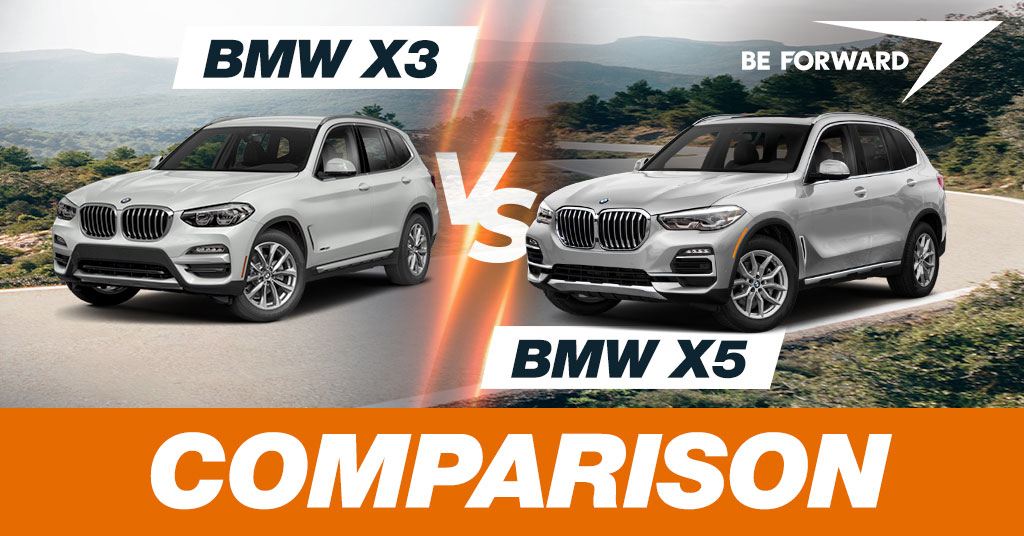 BMW is famous for producing high-performance, high-technology luxury cars that are ideal and practical, and these vehicles come in different sizes and forms. BMW has most models and versions that try to look similar in many aspects but differ in size, engines, performance, and form such as BMW X3 and BMW X5. In this article, we will review BMW X3 and BMW X5 models by comparing their interior, exterior, engine, and practicality. The BMW X3 and BMW X5 are both SUVs and when it comes to deciding which one to buy, it can be difficult to decide which one you should buy!

Our review of the BMW X3 vs BMW X5 is full of information about the styling, design, interior, and exterior department on both models, plus what is installed under the bonnet. Please let’s go through it.

N.B: Prices are reflective of average BE FORWARD prices as of May 2022.

The BMW X3 is spacious for a car its size and comes with enough space for both headroom and legroom in the front cabin. The second-row seat is designed to  accommodate 3 passengers, but the one sitting in the middle will struggle for legroom due to the interference of the transmission tunnel, but the 2 passengers will be much more comfortable.

The interior of the BMW X3 is so good and you will find storage booths that are useful for storing items such as smartphones, goggles, handbags, beverages, etc. In the front row, you are treated with a center box, 4 cup-holders, door panel storage, and a glovebox. In the passenger’s row, there are front seat jacket pockets, 4 cup holders, and door pockets.

The boot space is somehow great and can accommodate luggage for a family of 5. When extra space is needed, the rear seats can fold flat in a split format to create an even bigger room.

The BMW X3 has a smooth and well-shaped exterior that is angular from the front to the curvy rear. The M Sport has bigger alloy rims and extra detailing that give it an impressive pose with all higher grades.

As the very first SUV from this Bavarian car-maker the BMW X5 first made its appearance in 1999. When the 2nd generation X5 was launched with many improvements and upgrading including an all-wheel-drive system that was combined with an automatic transmission the following generations receive many upgrades in the exterior, interior, and technology. The 3rd generation started production from 2013 to 2018, with a number of further upgrades and improvements and incorporating the latest technology features. Now it’s in the 4th generation starting from 2019 to the present.

The BMW X5 is a 5-seater, 5-door luxury SUV that is roomy with enough space to carry 5 tall adults comfortably. Inside the X5 has a number of advanced features suitable for its status. Among the most key features include its fitting 10-way adjustable front seats. The driver’s seat has features like heated seats, leather, and lumbar support.

Other interior features include front and rear cupholders, a navigation system, a built-in system monitor, power control for the tailgate, a smart device integration system, all-power windows, and a sunroof. With all of the features being within easy reach like many BMWs, this model makes the cockpit a driver-centric affair. In addition, it has a useful footrest as well as a telescopic steering wheel.

The exterior of the X5 has great looks and is also eye catchy for any passerby that values a good appearance of a vehicle. The X5’s tapered roof gives this vehicle an aggressive look fit for a station wagon.

The xDrive45e PHEV was another 2020 model year addition. It also has the B58 engine, attached with a 110 hp electric motor. The result is a combined power output of 389 hp from its larger 24 kWh battery pack.

In addition to the horsepower increase, the standard model and the Competition’s major differences are larger rear wheels, an upgraded exhaust system, and tires, improved standard leather upholstery, and Track mode.

Apart from having different model years with different engine sizes fitted under the bonnet, the X5 offers a standard fuel consumption range from 10.6km per liter with its fuel tank capacity of 83.3L.

BMW is at top of automobile makers who manufacture good and reliable cars that are going anywhere without stress. The BMW X3 and the BMW X5 are those models that are unlimited in almost every aspect of vehicle details, The BMW X3 has better fuel consumption than BMW X5, but BMW X5 is the best in luxury and comfortability.

If you plan to buy one of these models whether it is X3 or X5 you need to break the bank though the BMW X3 seems to be more affordable rather than BMW X5. After this piece of article, you will be filled with enough tips and the choice remains yours in which model to buy between BMW X3 vs BMW X5. Take a look at which model is better for you by visiting BE FORWARD.