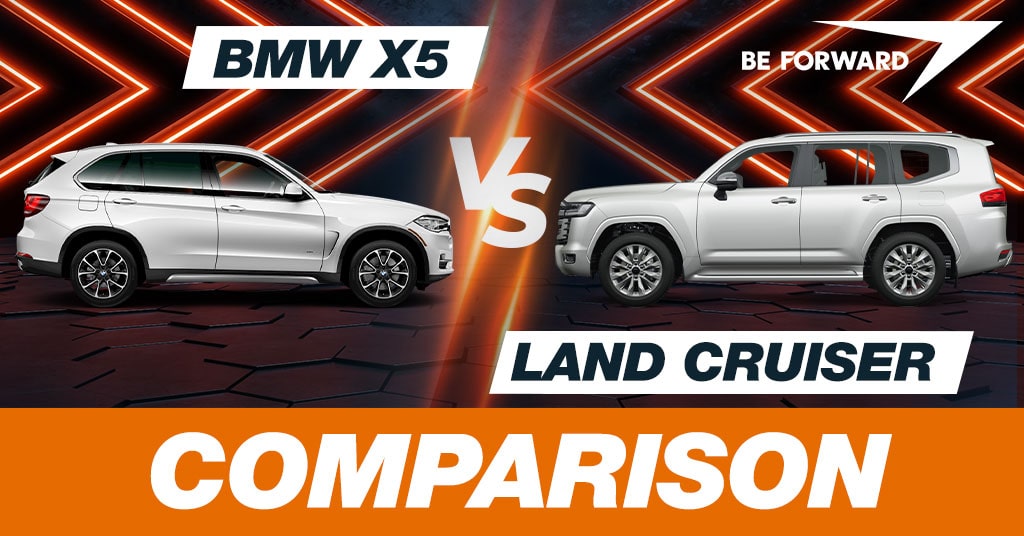 Our review of the BMW X5 vs Toyota Land Cruiser will be based on the design, interior, exterior, safety, styling, and features.

N.B: Prices are reflective of average BE FORWARD prices as of July 2022.

The BMW X5 is the first SUV from the Bavarian car-maker that first made its appearance in 1999. From the second generation to the present BMW X5 received many improvements and upgrading including an AWD system that was paired to an automatic transmission. From 2013 to 2018 the third generation appeared, with huge upgrades, improvements, and incorporation of the latest technological features. Now BMW X5 is in its fourth generation.

The BMW X5 is a 5-door/5-seater luxury SUV that is roomy with enough head and legroom, and capable of accommodating 5 tall adults comfortably without any stress. Inside the BMW X5, you will find a number of advanced features suitable for its status. The front seats are 16-way power-adjustable with memory settings for the driver’s seat. Other standard features include heated front seats, a leather-wrapped steering wheel, and synthetic leather upholstery.

Other features found inside BMW X5 include front and back cup holders, a navigation system, a built-in system monitor, power control for the tailgate, all-power windows, and a smart device integration system.

Behind the 2nd-row seats, the BMW X5 has a boot space of 1,076L. The second-row seats can easily split-fold to unleash the maximum 2,152L boot. There is also a storage area beneath the cargo space that can be used to hide items far from the eyes of passersby.

The latest BMW X5’s exterior is eye-catching. Any car enthusiast will be amused at how good-looking the vehicle is.

The Land Cruiser‘s longevity and reliability have led to its massive popularity and it is the best-selling body-on-frame, 4WD vehicle, especially in Australia.

Depending on the model, the interior of the Land Cruiser changes but the new model has a cockpit look that has a modern style, and a well-design cluster with an advanced infotainment system. The overall cabin is roomy and gorgeous which offers more luxury and comfort when cruising whether on-road or off-road.

There are numerous storage facilities for storing items such as smartphones, beverages, handbags, and goggles inside the cabin. In the driver’s and passenger rows, you will find a center box, a glove box, door panel storage, and 2 cup holders, and in the back row, you will find a front seat jacket pocket and a door storage panel.

The Land Cruiser’s exterior looks different in each generation but the latest series or model has a superb exterior looking that’s attractive compared to the preceding generation. With a front grille attached well to the front bumper, the front look appearance offers a greater look and is well-designed.

The BMW X5 has an average fuel consumption range of 10.6 km/l.

The Land Cruiser‘s fuel consumption is around 7.5 km/L to 11.2km/L but depending on the model and year of manufacture.

BMW and Toyota are at top of automobile makers who manufacture very nice and good-looking cars that are going anywhere without limitation. The X5 and the LC are those models that are countless in almost every aspect, The Land Cruiser is better in comfortability and luxury while the BMW X5 is better in fuel consumption.

In terms of space, the Land Cruiser has a roomy interior and advanced technology inside with more features than X5 but both models are well in speed.

To buy a BMW X5 or Toyota Land Cruiser of any generation, visit BE FORWARD to check out our stock of used cars.