The first production automobile, the Benz Patent Motorwagen, may have hit the road just shy of 130 years ago, but automakers are always looking toward the future, and we usually get to see their visions of the future at the auto shows. The North American International Auto Show, also known as the Detroit Auto Show, is one of the biggest, attracting automakers from around the world to show off their latest and greatest automobiles and technologies.

This year, at the 2015 Detroit Auto Show, things were no different, as automakers from all over the world revealing impressive, and not so impressive, concept cars, model updates, and new production models. Here, we’re taking a look at some of them. 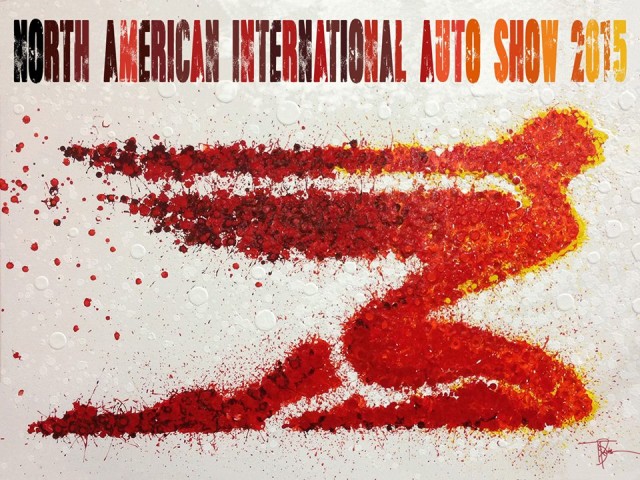 Looking at the auto show debuts in Detroit, one can’t help but opine on the best and worst of the show. A couple of the best, we would say, were those that we weren’t even expecting, such as the new Ford GT Concept and Chevy Bolt EV Concept, discussed below. On the other hand, we have to ask, “What were they thinking when they brought (insert model here) to the 2015 Detroit Auto Show?” What comes to mind immediately are the Smart fortwo ED and Smart fortwo Flashlight, last year’s models on their way out, which the company decided to “bow out” at one of the world’s biggest auto shows.

We suppose we can forgive Smart for releasing a special-edition fortwo, and it’s nice, even though it’s still last year’s model. The Smart fortwo Flashlight comes in a Lava Orange frame with Matte Crystal White or Deep Black panels, featuring black alloy wheels and an exclusive black grille. Inside, the special edition features a sporty black leatherette and fabric interior with Lava Orange contrast-stitching and accents on the seats, dash, and steering wheel. 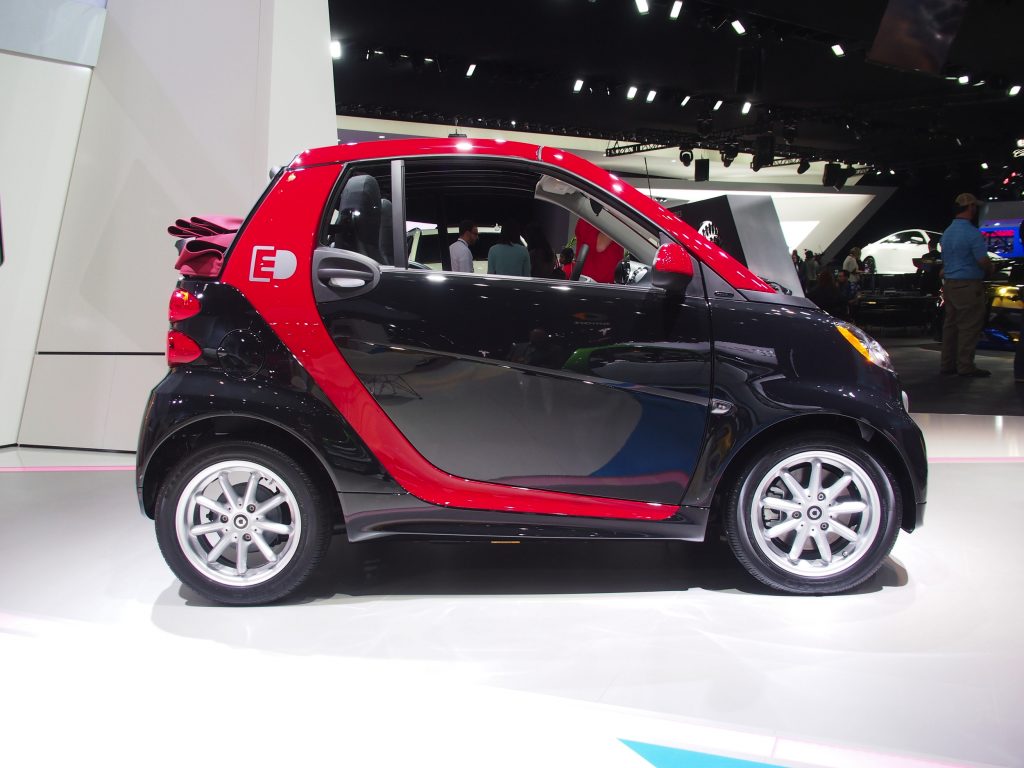 On the other hand, the all-new and completely-redesigned Smart fortwo, at least the gasoline-powered version, is coming quickly to dealers everywhere. On the other hand, last year’s battery-electric version will hang on for another year. Rumor has it that the ED has also been redesigned, but we figure they made too many of the old one, so they have to get rid of those before they can roll out the new ones?

If one thing can be said about auto show debuts, it is what they tell us about the future of automobile transportation. Some have to do with the cars themselves, and some with the technology that enhances driving. One thing that can be said about most of the auto show debuts is that they are more powerful and more efficient than ever before. While nearly three-quarters of all new cars at the Detroit Auto Show were gasoline powered, fuel-efficient options took up a larger chunk this year than ever before, 14% hybrid cars, 7% diesel powered, and another 7% electric cars. Interestingly, just 24% of these new releases, at least those with internal combustion engines, were naturally-aspirated, the other three-quarters or so featuring some kind of turbocharging or supercharging. Our driving future, if the 2015 Detroit Auto Show shows us anything, is going to be a fun ride! 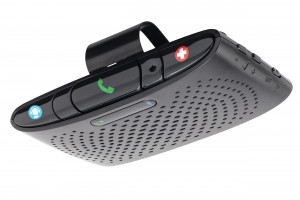 While many modern cars offer some sort of telematics remote assistance package, such as General Motors OnStar or Lexus Link. These systems enable drivers to access to local information, directions, even make reservations. In case of an accident, such systems can automatically call emergency services with your exact GPS location. The only problem is that you can’t enjoy such services unless the car came with it in the first place. American communications company Verizon, introduced its own telematics system, a GPS-enabled communications system that can be added to any car, whether it’s fresh off the lot or has been sitting in your garage for twenty years!

Usually, as auto shows draw near, automakers tease us with renderings, out-of-focus product shots, and blurbs about their upcoming “next big thing” and new releases. This is pretty much the opposite of “being able to keep a secret” and, seeing as so many automakers like to tease us, one would think that there were no surprises left, especially at a show as big as the 2015 North American International Auto Show. It seems that some automakers do know how to keep a secret, whether by sheer willpower or mafia involvement, we couldn’t tell you, but their surprises were well worth the wait!

Perhaps the most-surprising of them all was the Ford GT Concept, an all-new carbon-fiber supercar. The name may be familiar to enthusiasts, the Ford GT supercar making an awe-inspiring 1st, 2nd, 3rd-place win at the 1966 24 Hours of Le Mans, one of the world’s most-challenging endurance races. Considering that the Ford GT Concept is meant to celebrate the 50th Anniversary of that historic win, that Ford people were able to keep such a big thing a secret is all that much more impressive. Still, that’s nothing like what Ford’s vision of the future of performance is, as can be seen in the Ford GT Concept. 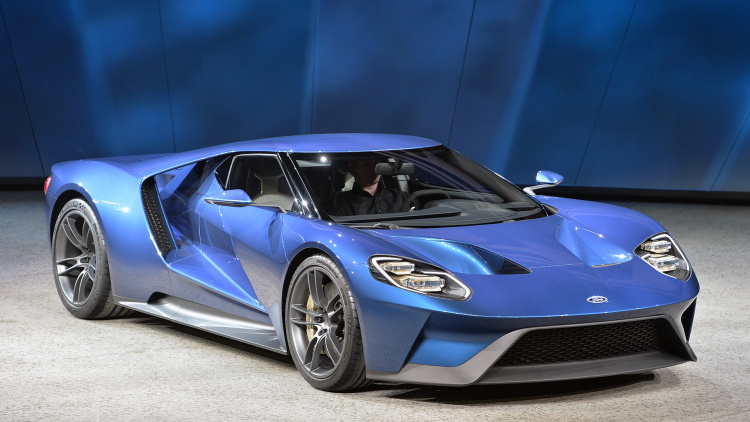 A modern interpretation of the ground-breaking 1966 Ford GT40 design, the Ford GT Concept, set for production in 2016, features all new construction and powertrain technology for the 21st Century. The chassis is lighter than ever before, aluminum stub-framing connecting to an all-carbon-fiber passenger cell. In addition, Ford’s most-powerful EcoBoost engine, a twin-turbocharged V6, generates over 600 hp. Combining lightweight construction and excessive power, the Ford GT also adds in the latest in electronic stability control, torque vectoring, sport-tuned anti-lock brakes, and adaptive suspension, enabling spirited performance and exceptional control.

While many 2015 Detroit Auto Show debut were focused on performance, more than a few were dedicated to sustainability, not the least of which was the Chevy Bolt EV Concept. If that sounds familiar, then you could be thinking of the Chevy Volt, also known as the Holden Volt, Opel Ampera, or Vauxhall Ampera, depending on region. The Chevy Volt, of course, is an extended-range electric vehicle, with an electric-only range of around 40 miles, upgraded to around 50 miles at the Auto Show, after which a small gasoline-powered generator provides power, extending range up to 400 miles.

The Chevy Bolt EV Concept, on the other hand, is an all-electric vehicle, with no gasoline backup, but it doesn’t need it. Featuring over 200 miles of range, and capable of DC fast-charging, the Chevy Bolt offers more range than the average driver needs over a few days, or enough for that weekend getaway. What is more, all that comes starting around $30,000, which makes it more affordable instead of exclusive, which makes it more attainable for the average driver. In turn, attainability means the Chevy Bolt will make much more of an impact on the environment.