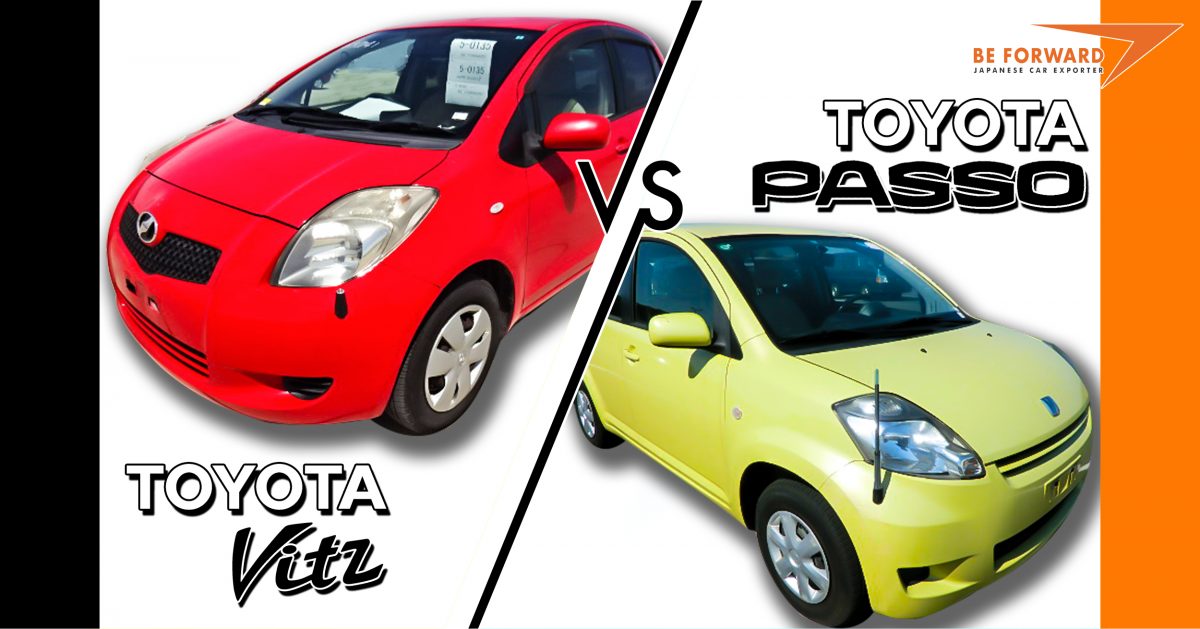 Toyota is one of the world’s largest automakers, and Toyota hatchbacks have earned worldwide appeal, such as these Toyota hatchbacks that we think are worth considering; the Toyota Passo and Toyota Vitz. On paper, they look very similar, but upon further examination, they demonstrate a couple of differences that are worth noting.

Passo vs Vitz: The Differences

First, both of these Toyota hatchbacks sport a series of fuel-efficient three- or four-cylinder engines, ranging from 1.0L to 1.8L, in both gasoline and diesel flavors, actually two of the top-ten most fuel-efficient vehicles in Japan.

The engine options are paired with either four-speed automatic or five-speed manual transmissions, and a choice of front-wheel or all-wheel drive.

Some may baulk at the automatic-transmission option, but there are a couple of reasons to not worry about it. First, Toyota automatic transmissions are some of the most-advanced in the world, their fuel economy rivaling even the best manual-transmissions. Second, if you seek raw performance, these aren’t the cars you are looking for. Move along.

Both of these Toyota hatchbacks are pretty compelling, as both the Toyota Passo and Toyota Vitz have room for up to five passengers, making them great companions for the fuel-conscious driver who has a few extra passengers.

Is the Toyota Passo a Better Hatchback MPV Than the Vitz?

For such a small vehicle, the Toyota Passo boasts a remarkable amount of interior space. The smart interior makes use of thinner door panels and the dash-forward design, among other design cues, to give the feeling of spaciousness to this compact Toyota hatchback.

At the same time, the Passo includes multiple safety systems, such as airbags and vehicle stability control, to keep you and your passengers safe. The slightly larger Toyota Passo Sette four-door hatchback is actually classified as a mini-MPV, and has enough room for up to seven passengers, albeit small ones.

Everyday driving is best done with just four or five passengers, as the first two rows of seats are more proper seating for regular passengers.

The third row seats are more of a padded bench, which on occasion makes good seating for a couple extra small adults or children. On the other hand, the third-row seats do fold flat nicely, increasing cargo space behind the second-row seating.

Toyota Vitz: Is the Smaller Passo Lookalike a Better Option?

The Toyota Vitz is very similar to the Passo, on a slightly smaller scale. The Vitz is available as a three-door or five-door hatchback, both sporting seating for up to five passengers.

The same design cues that make the Passo seem spacious are at work in the Vitz, which keeps driver and passengers from feeling claustrophobic, but the cargo-space behind the rear seats is exceptionally small.

Don’t expect to carry anything but the essentials back there. If, on the rare occasion, you do need the extra space, the rear seats fold nearly flat to allow for bigger items.

The powertrain options on the Toyota Vitz are slightly different from those of the Passo, including the availability of a CVT (constant velocity transmission) on most of the gasoline models, the addition of a 1.4ℓ turbodiesel, as well as a six-speed manual transmission on later models.

Both the Toyota Passo and Vitz offer plenty of attractive features, fuel efficiency and performance to stand out among the hatchback field.

The Toyota Passo features a 996cc to 1,329cc engine displacement, seats 5 passengers, and is available in either a front-wheel or four-wheel drivetrain. Typical features of the Passo can include:

In terms of fuel economy, the Passo provides an impressive average fuel consumption rate of around 20.8km/L. Looking for a Toyota Passo at a great price? You can find good selection of used Toyota Passo models at BE FORWARD for between $300 to $4,900.

Much like the Passo, the Toyota Vitz comes in a 996cc to 1,329cc displacement petrol engine, and can also transport a maximum of 5 passengers with a front- or all-wheel drivetrain. Common features of the Vitz can include:

When it comes to fuel efficiency, the Vitz offers between 18km/L to 21.8km/L in fuel consumption. BE FORWARD carries a wide selection of well-conditioned used Toyota Vitz models at wallet-friendly prices ranging from $600 to $4,800.

As budgets get tighter and we’re still looking for basic transportation, the need for reliable and economical vehicles, such as the Toyota Passo and Toyota Vitz, is clear. When properly maintained, even used Toyota hatchbacks will deliver comfortable and reliable transportation for many years and thousands of kilometers to come.