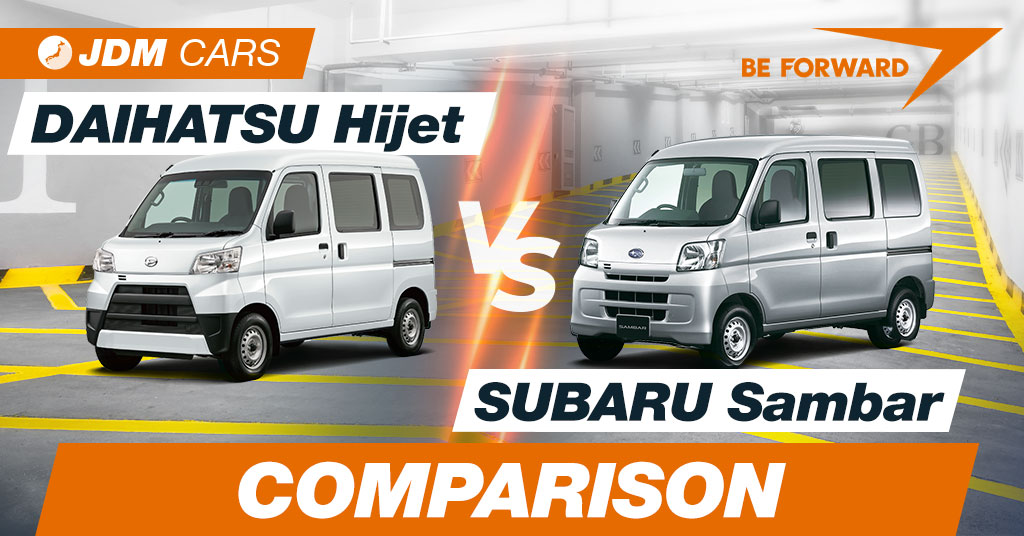 Light commercial vehicles commonly known as Kei cars have been a darling for the Japanese for many years, and due to that many companies offered models of Kei cars. Today we will take a look at two of the oldest and best performers in the Kei truck/van category: the Daihatsu Hijet and Subaru Sambar. These two cars have gone neck on neck with each other from 1960 to the present whereby the Sambar comes as a rebadged Hijet. Please read on

The Hijet is a 5-door 4-seat van that can easily be accessed via the front-hinged doors or rear sliding doors. Unlike other microvans which feel a bit cramped inside, the Hijet is spacious and can accommodate two people at the front and two at the back comfortably.

With exception of its good build quality, the Hijet was designed with ergonomics in mind as it utilizes the available space sensibly.

The seats are comfortable, even though they might not feel as good as those of a family car, but still, you won’t have any issues about them. The front seats are much better as they also feature a headrest, unlike the rear bench which does not. The Hijet was designed for short urban commutes; if it occurs you drive it for long hours you’ll feel the need for a short break to stretch your back.

The Hijet offers storage in the form of cup/bottle holders, a tray, a coin (small things) holder, and a glovebox. You also get a large luggage area that can be expanded by folding the rear bench.

The Hijet’s exterior dimensions kept changing with the change in Kei car regulations. The latest model has a wheelbase of 2.4 meters (Van), a length of 3.4 meters, a width of 1.5 meters, and a height of 1.9 meters.

The front view of the Hijet features a large bumper with cooling air vents at the center and LED fog lights on the sides. Above the bumper, on the extreme left and right corners, you find LED halogen lights, while at the rear there is a bumper that is also fitted with LED taillights and brake lights (other models feature a different setup).

The interior of the Sambar is simple and basic. The front seats are cushy affording the driver and passenger with the necessary comfort. The rear seat is a bench, it’s not as comfortable as the front seat, but it’s enough to accommodate two passengers on an urban commute. The dash houses the simple binnacle, radio, and air control switches.

Storage comes in the form of small door pockets, cup holders between the front seats, and a glovebox. The luggage area is large enough, it is about 1.8 meters in length with the rear seat folded, enough to accommodate two mountain bikes comfortably.

Other features include power windows at the front and a manual at the rear.

The Sambar is boxy and not attractive, but so ergonomic. At the front, the Sambar has a large bumper with air cooling ventilation; just above it is the front grille with the Subaru badge. On the sides, there are two large halogen headlights and two small side indicating signals.

The basic safety features of the Sambar are ABS, Airbags, and seatbelt.

The Hijet spans 10 generations and has used several engines to power it in that duration. We will focus mainly on the E-series engines as seen below.

The Sambar was introduced in 1961, with its latest version being the 7th generation. The Sambar gained its popularity for having its engine at the rear. The Sambar is rear-wheel driven with four-wheel drive as an option. We will take a look at some of the engines that the Sambar has used over the years as seen below.

Since Daihatsu Motors is owned by Toyota and also the Fuji Heavy Industries (Subaru’s parent company) is majority-owned by Toyota, it led to Toyota deciding that from 2007 all Subaru Sambar will be a rebadged Daihatsu Hijet.

The Daihatsu Hijet and Subaru Sambar have had healthy competition in the microvan category since their inception in the ’60s which led to each company seeking ways to improve to gain an upper hand and win more customers over its competitors. This made the Hijet and Sambar better and better as can be witnessed from this article until the year 2007 when they were merged to become one. So if you decide to purchase any of these two models, then you are making a wise choice. Please visit BE FORWARD to choose your car from our long list.

ALL DAIHATSU HIJET FOR SALE

ALL SUBARU SAMBAR FOR SALE

One thought on “Daihatsu Hijet vs Subaru Sambar Comparison”