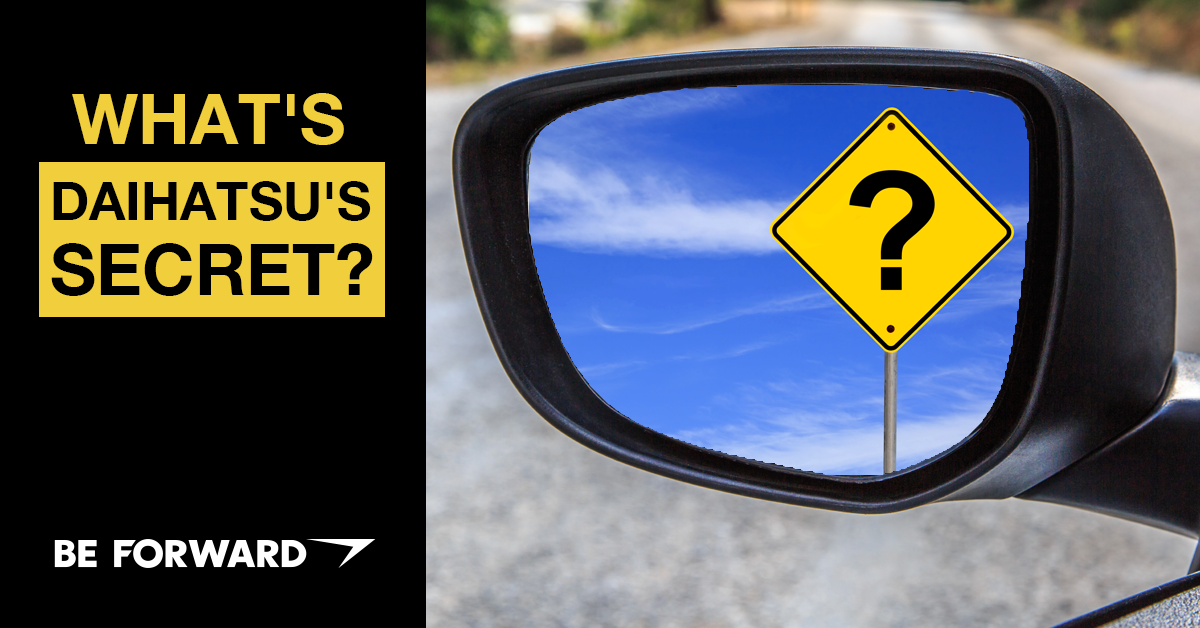 Daihatsu Motors as it is today was formed to succeed Hatsudoki Seizo Co. Ltd, which was established in 1907 and regarded as one of the oldest makers of internal combustion engines. However, what many people may not know is that since August 2016, by share exchange, Daihatsu is a wholly owned subsidiary of Toyota Motors.

That is why most of the features of the Daihatsu Boon, for example, are not much different from the Toyota Passo—another car particularly popular in Malawi—as it is basically the same car under a different name. While Daihatsu made great cars before their merger with Toyota, they became even better. Here are 3 of the best Daihatsu cars to buy used thanks to their fuel economy, interior features, affordability, and availability of spare parts. 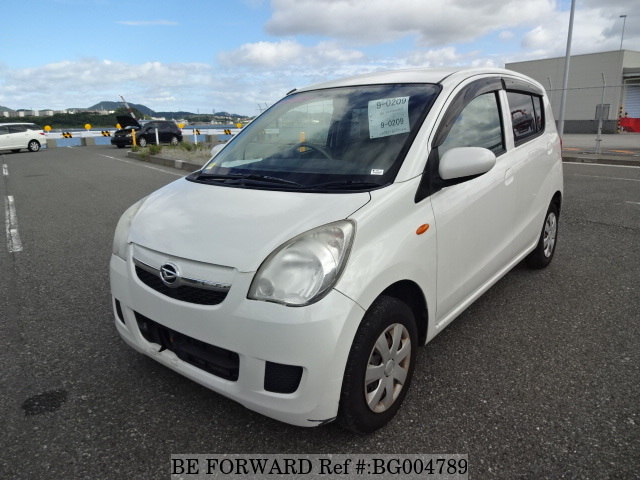 Save on Daihatsu Mira Models Now

The 1st generation of the Daihatsu Mira was launched in 1980 and is now in its 8th generation, unveiled in 2017, which is a testament to its popularity. The Mira was designed to be a swift urban vehicle, and thanks to its more compact size, it is easy to maneuver into small parking spaces and around smaller urban areas like you may find in downtown Nairobi or Harare.

How Much is a Used Daihatsu Mira? 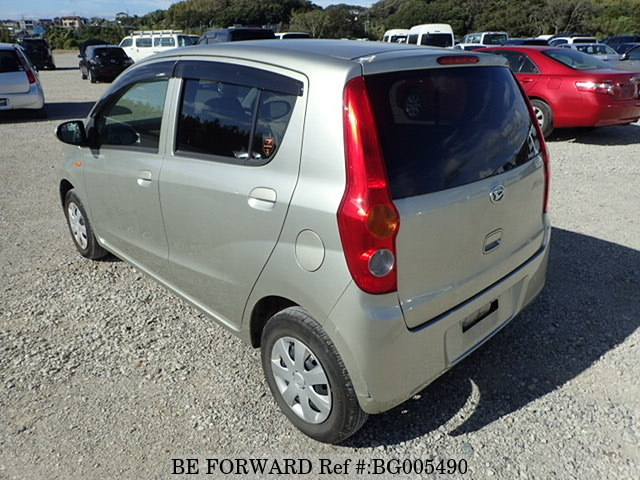 Above: Rear of used 2008 Daihatsu Mira

Built for the small car market segment, the Mira is very affordable and has low running costs. For example, the Daihatsu Mira 2012 model can cost on average anywhere from as low as $675 FOB.  Other recommended models and their used pricing can be found below:

The exteriors of all Daihatsu Mira generations are a delight to look at. As far as Kei cars are concerned, they could easily be the best. In fact, the 3-door Mira has often been referred to as the ‘Mini of Japan.’ Good body trims, a nice grill, and prominent headlights adorn the front, with the rear being not boxy at all thanks to its nicely positioned back lights that make this car sweet to look at. 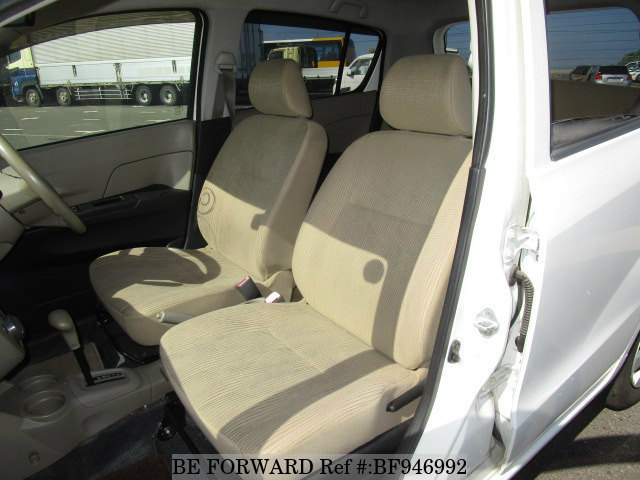 Above: Interior of a used 2009 Daihatsu Mira

Within its interior, you will be impressed by the amount of cabin space, which is good enough for even the tallest drivers, and the dash and other parts are made of high-quality and durable plastic. Other added features include power steering, power windows, keyless entry and ignition, cruise control, engine start button, seat position memory, luggage box, and more. The rear seating area can be slightly cramped for taller people, but there is enough space for 5 passengers in a pinch. Power windows and optional rich leather upholstery across certain trims also give this car a touch of luxury. While the boot space on offer is more compact, it can be extended by folding the rear seat.

The smaller 550cc to 660cc engine of the Daihatsu Mira means this car has low running costs. With multi-valve and electronic fuel injection (EFI) technology mated to a 5-speed automatic gearbox, this car can run at high speed and reach speeds higher than 100km/h on flat roads. 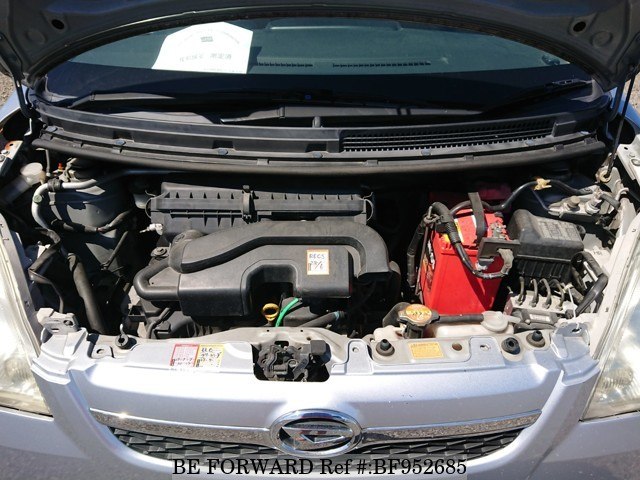 Above: Engine of a used 2007 Daihatsu Mira

The average Daihatsu Mira fuel consumption is around 21km/l, with a fuel type of petrol and average fuel tank capacity of 30 liters. If you import a Daihatsu Mira from Japan equipped with a start/stop fuel-saving engine system, you can see a further increase in fuel economy up to around 27km/l.

Due to the compact specs of the Daihatsu Mira, this small hatchback is best suited for single people, couples, or small families that mostly do urban driving. If you work in the central business district of any city in Africa, such as Lilongwe in Malawi, this car is perfect for parking in small spaces, maneuvering in traffic jams, and doing your daily errands. 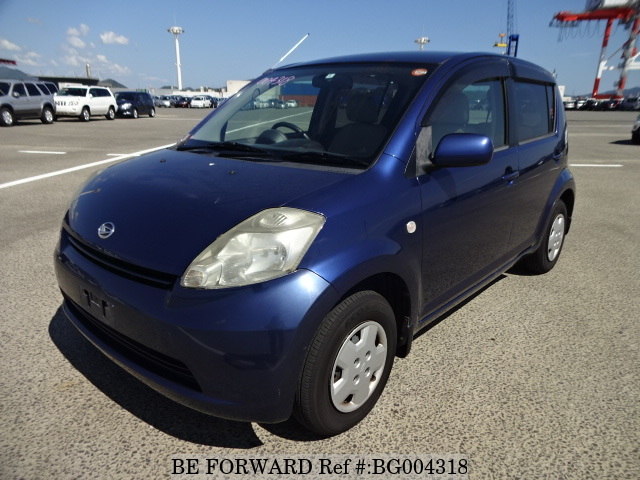 Save on Daihatsu Boon Models Now

How Much is a Used Daihatsu Boon? 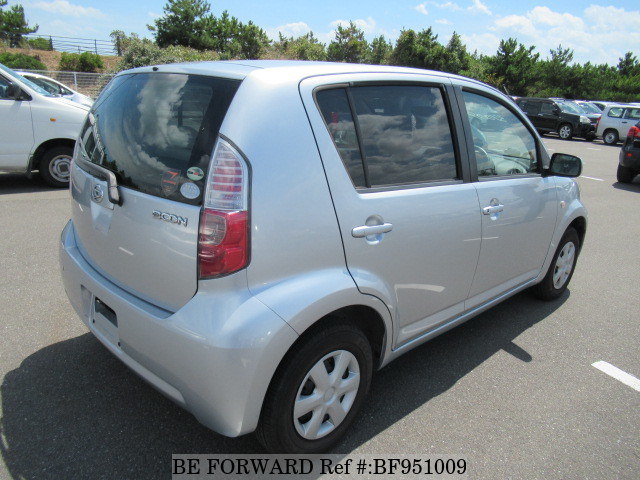 Above: Rear of a used 2008 Daihatsu Boon

The 2009 Daihatsu Boon, which is one of the more popular used models, can cost anywhere between $600 and $900 FOB. More information on other popular Boon models can be found below:

The exterior of the Daihatsu Boon is sleek and modern. At its exterior, this 5-door hatchback has fog lamps, HID headlights, turn signals on the side mirrors, and optional sport rims across a number of trims that add to its appeal. Regarding its features, you can find components such as electric mirrors, power steering, navigation, cruise control driver assist features, and more available. Bigger than the Daihatsu Mira across most aspects, this hatchback is also a great option for those looking for a slightly roomier drive. 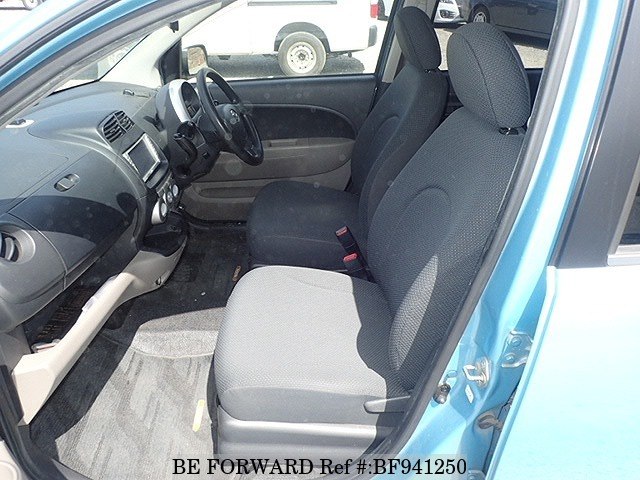 Above: Interior of a used 2005 Daihatsu Boon

The interior of the car is spacious, and can seat 5 passengers (including the driver) comfortably thanks to its good amount of cabin space, with enough leg and head room for most body types. Controls on the steering wheel, front power windows, and electric mirrors complete the picture, along with nicely textured interior plastic parts. As with most hatchbacks, its more compact boot space can be extended by folding the seats to fit bigger or longer luggage. 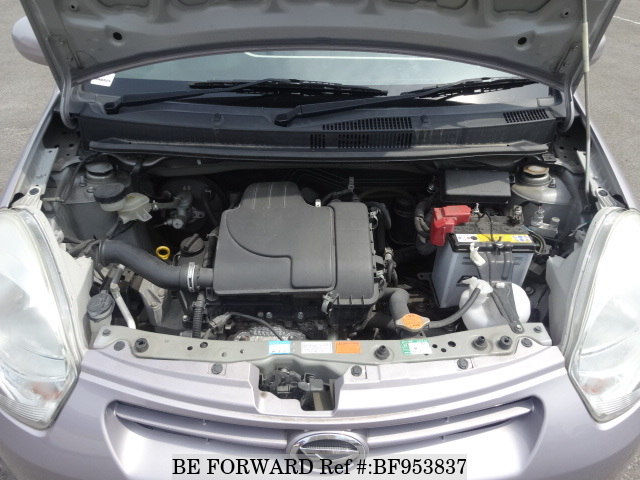 Above: Engine of a used 2010 Daihatsu Boon

The Daihatsu Boon’s fuel consumption is quite impressive, reaching an average of a fuel-friendly 14km/l. Its engine displacement is between 996cc to 1,329cc, depending on the model, running on an EFI, 4-cylinder engine. This is coupled with a 5-speed manual or automatic gearbox and a rear-wheel drive system. The fuel type available is petrol, with a decent average fuel tank size of 36 liters.

The features and sizing of the Daihatsu Boon indicate that this is a great hatchback for families. It is an excellent runabout vehicle for local errands, but can also be up to the task when going on long drives from one town to another or through the countryside. With a decent boot space of 225 liters, which is extendable, the Boon serves well as a solid car for small families. As with the Daihatsu Mira, the Boon is also a particularly popular choice of hatchback in Malawi. 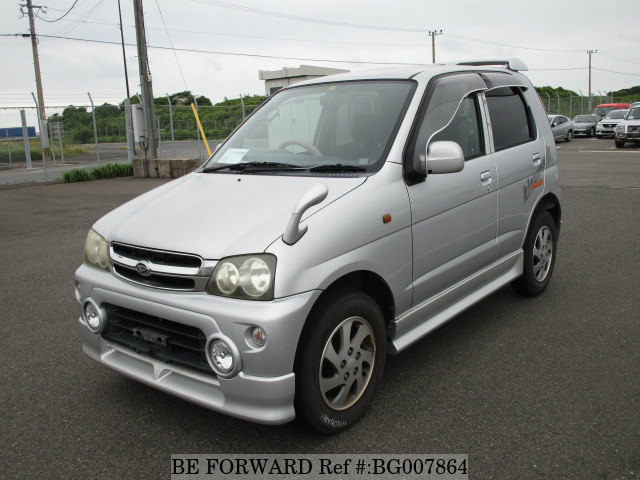 The Daihatsu Terios Kid is a compact uni-chassis mini-SUV measuring an average 396cm by 150cm. The 1st generation was released to the market in 1997, with the 2nd generation launched in 2006, and 3rd generation in 2017.

How Much is a Used Daihatsu Terios Kid? 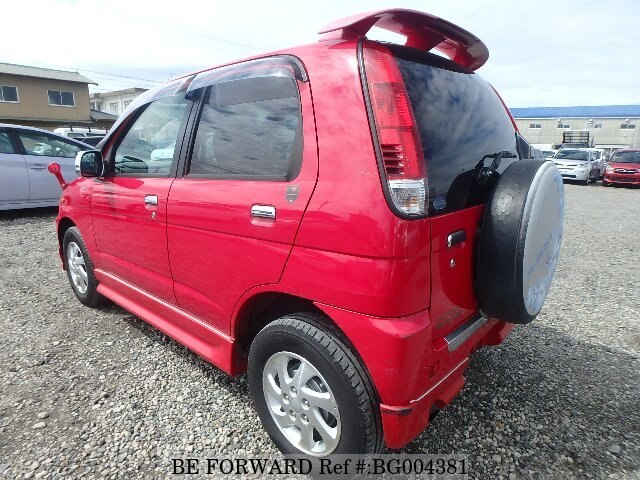 Above: Rear of a used 2002 Daihatsu Terios Kid

Any Daihatsu Terios Kid review will indicate that although this is a small mini-SUV, it surprisingly offers a lot of legroom and headspace for all passengers. Standard and optional features included within the interior range from electric mirrors, power windows, and navigation system to a nicely sized boot space of 410 liters to fit all kinds of small to medium goods. 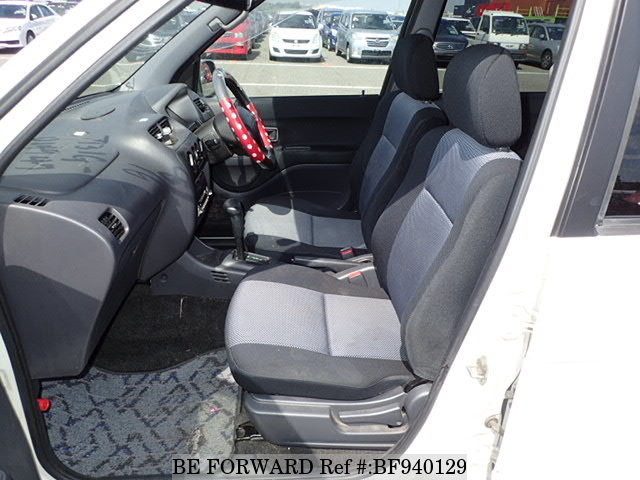 Although the Terios Kid looks similar to the Toyota Cami from a distance, it is different in a number of ways. Power steering makes keeping this mini-SUV steady on the road a cinch, in addition to a centrally located instrument panel for added convenience for the driver. All models of the Daihatsu Terios Kid also feature an AM/FM radio. 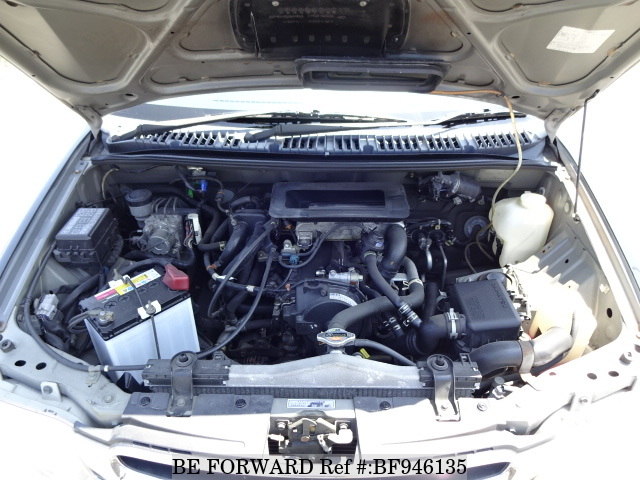 Above: Engine of a used 2005 Daihatsu Terios Kid

The average Daihatsu Terios Kid engine is a 659cc, 0.7i 12V, indeed admirably small and economical, yet quite powerful for a 4WD vehicle of its size. This engine is then coupled with a 5-speed manual or automatic transmission and an all-time 4-wheel drive train. The fuel used is petrol, with an average fuel economy of 10km/l and a fuel tank capacity of around 40 liters.

The low Daihatsu Terios Kid fuel consumption and the ability to go off-road when you need it to are some of the most attractive things about this compact mini-SUV. Young professionals, small families, and anyone who loves to go off the beaten track every now and then at a low cost may find this car a great option to consider. This is especially true when comparing the Daihatsu Terios Kid to other larger SUVs that include higher running costs, as the Terios Kid gives just about the same features for an overall lower cost. Thanks to its off-road capabilities, the Terios Kid is very popular for those in Mozambique, Tanzania, Zambia, and Zimbabwe.

Which Daihatsu Car is Best for You?

Even from just looking at these 3 cars alone, it is easy to see the result of Toyota and Daihatsu merging and bringing their best qualities to the table. Toyota’s world-renowned approach to personality, functionality, and reliability has clearly been adopted into the Daihatsu models. The availability of spare parts, fuel efficiency, and resale value of the Daihatsu models that we have reviewed here in particular are reminiscent of the characteristics of Toyota.

As all 3 featured here are solid choices, it ultimately comes down to personal taste and the intended use. For style, appearance, and longer drives, you may lean towards the Daihatsu Boon. For daily urban errands, the Mira may be a great option. For unpaved country roads and very economical long drives, choose the Terios Kid. Now that you have seen the features of each, you can gauge your expectations carefully and buy a car according to your needs.

Save on used Daihatsu Models Now

3 thoughts on “Daihatsu Reviewed: What’s the Secret That Makes These Cars Great?”