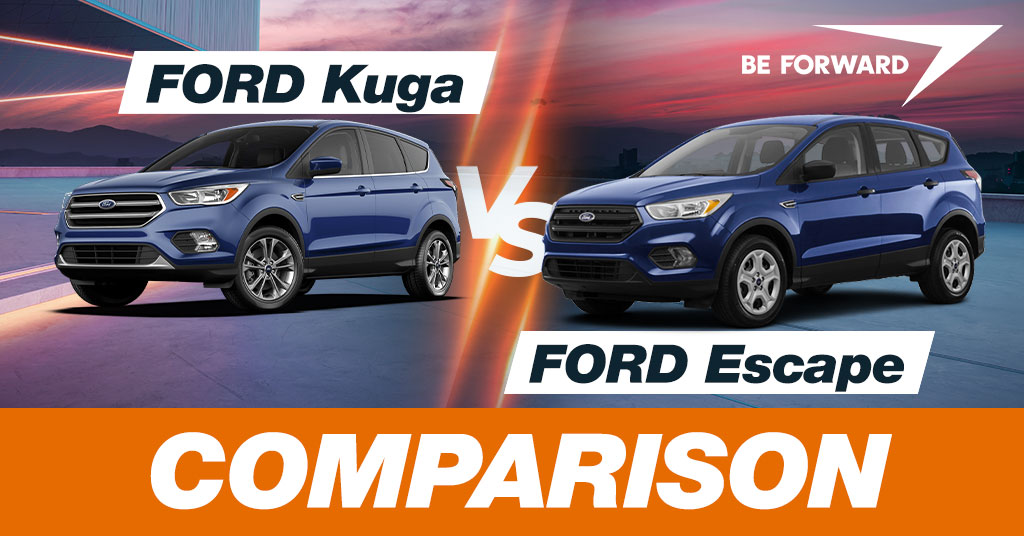 Ford is very popular for manufacturing durable and reliable cars with greater technology and features. Ford is the best-seller in the Hatchback, SUV, sedans, and pick-up vehicles which have been around for long years. The Kuga and Escape look similar but they differ in some aspects. The Escape has been in production since 2000 and from 2013 the Escape was renamed the Kuga, therefore, we can say Ford Escape is the predecessor of Kuga’s first-generation SUV. Though they look similar they have slight differences in terms of interior spaces, performance, e.t.c but the Escape is a legend.

This review of Ford Escape and Ford Kuga will focus on performance, interior, exterior, style, and engine size on both models.

N.B: Prices are reflective of average BE FORWARD prices as of March 2022

The Ford Kuga is a compact crossover SUV (C-segment) produced by Ford since 2008 especially for the European market, and is now in its 3rd generation and available in front-wheel drive and 4WD.

The Ford Kuga has a larger cabin that can accommodate 5 adults with enough space for both rear and front seats. The front seats offer satisfactory support and comfort.

Inside the Kuga’s cabin, you will enjoy several storage facilities that are useful for keeping items such as smartphones, beverages, goggles, and handbags. At the front, you will find a center box, 2 cup-holders, door pockets, and a glovebox. At the rear, there are door pockets and front seat jacket pockets.

The Kuga has enough cargo space at the back that can carry enough luggage.

The Kuga exterior looks modern with a design and style that appeal to modern cars.

The interior of the Escape has a modern cabin with a sophisticated dashboard. The seats are well positioned which offers comfortability while driving. The front row seats are comfortable and supportive with enough legroom. Space on the rear seats is a bit restrictive, but enough for medium-built passengers.

The boot space is the same as the Ford Kuga but it is adequate to carry more luggage.

The latest Ford Escape has a modern appearance with a well-designed front grille attached well to the bonnet and the fog lights increase the attractiveness of the car.

The 1st generation Ford Kuga came fitted with one of two engines which were the 2.0L Duratorq I4 diesel engine or the 2.5L Duratec I5-T petrol engine. These engines transfer power to the wheels via a 6-speed manual, 5-speed automatic, or 6-speed PowerShift automatic transmission.

Depending on the model and year of manufacture the Escape fuel economy is around 13.0km/L to 15.5km/L.

Ford has a good reputation in car manufacturing, with their cars known fro reliability, dependability, durability, and good resale value.

The Ford Escape and the Kuga are some of those car models in the Ford lineup that are countless in almost every aspect of car details, but there are minor differences between those cars. Kuga and Escape seem to have good comfortability and performance but the Kuga latest model seems to have more comfortability, high performance, and space. Both Kuga and Escape seem to have similar fuel economies.

After perusing through this review, we hope you will have enough understanding of these two Ford Kuga and Ford Escape. You can buy Kuga or Escape on BE FORWARD.