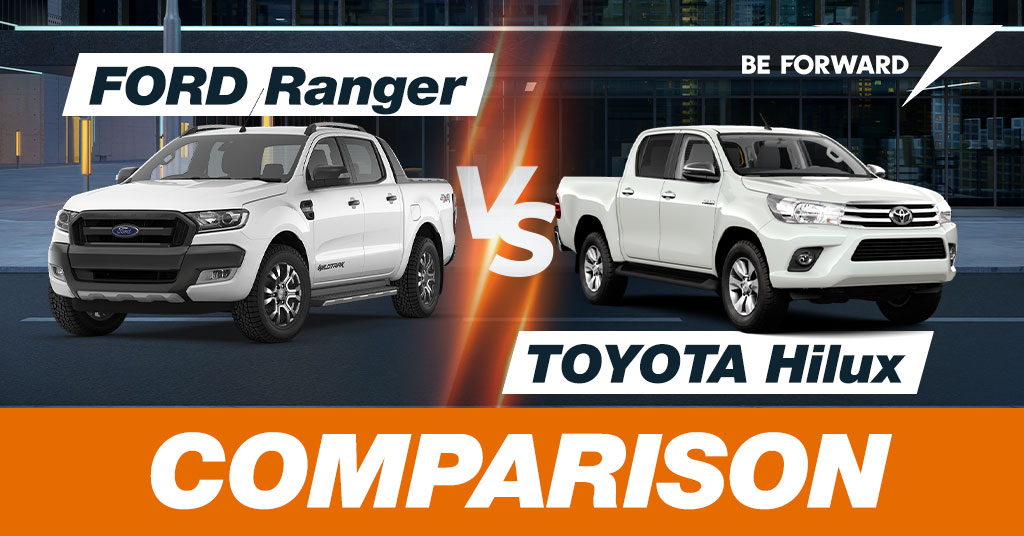 Every person has its taste in selecting which car suits its purpose but most people look for their financial muscles, interior space, and performance without leaving behind fuel consumption.

In this review, you will understand both models in terms of fuel consumption, performance, interior, exterior, and engine capacity. Which one will you buy: Ford Ranger or Toyota Hilux?

So take the time to pass through this review to the end and you will come up with which brand to buy.

In 1965 the Ranger was first introduced in America as a trim package of the bigger F-Series trucks but was dropped out in 1981, and in 1983 running to 2011 reintroduced when it was withdrawn in America due to the decline in demand for small pickup trucks.

The Ranger comes as a single-cab that has 2-doors and can accommodate the driver and one passenger in the cabin, a super-cab that has 2 full-size front doors and 2 back small doors with 4 seats with the back seats so limited, and the double cab with 4 regular doors and 5 seats. These models are available with the option of a 4×2 or 4×4 drivetrain.
The latest Ford Ranger based on the T6 platform was introduced in 2011 and designed by Ford Australia to replace the Mazda and American rebadged sourced Ranger.

The latest Ford Ranger has a modern, attractive, and tough-looking appearance; at the back, the lamps are embossed tailgate and LED tail Lamps.

The interior of the Ranger has plenty of space, with interior comforts and features that differ depending on trim. The standard trims front seats are basic, they have a basic 4-way manual adjustment, with luxurious and sturdy cloth upholstery, and comfy abundant.

It started as a utilitarian, small workhorse and advanced to a dual-purpose, fully-featured car. The Hilux has kept the same basic formula from its beginning in 1968, with a choice of diesel and petrol engines, 2WD and 4WD drive models.

The Hilux interior has been advanced with new features, such as a digital speedometer and redesigned binnacle which is now standard. Also, a trip computer that shows real-world fuel consumption is added.

In the cabin, you will find storage facilities that are for storing items such as goggles, handbags, beverages, and smartphones. In the first row, you will find 2 cup holders, a center box, a glovebox, and door panel storage. In the second row, there is storage on the door storage panel only.

The cargo space is somehow good for carrying luggage the same as the Ranger double cabin but it is adequate to carry more luggage or more. When more space is required you cannot add space. But the Toyota Hilux single cabin has more boot space compared to a ranger double cabin.

The 2nd generation Ford Ranger is powered by three engine choices such as 2.3L EcoBoost I4 turbo petrol engine, a 2.0L EcoBlue I4 turbo, 2.0L EcoBlue I4 twin-turbo, and 3.0L Power Stroke V6 turbo. These engines are mated to a 6-speed manual, 6-speed 6R80 automatic, or 10-speed Ford-GM SelectShift automatic.

The Ranger is powered by EcoBoost 2.3L DOHC 16V I4 turbo, direct injection attached to 10-speed Ford-GM 10R80 automatic produces a maximum power output of 270 hp and torque of 420 Nm.

While the Ranger is equipped with a Duratorq TDCi (P5AT) 3.2L DOHC 20V I5 common rail direct injection turbo, intercooler attached to a 6-speed Ford MT82 manual or 6-speed Ford 6R80 automatic produces a maximum power output of 197 hp and a torque of 470 Nm.

Depending on several factors, the Ranger fuel consumption is around 8.5 Km/L to 11.05.

The Ranger and the Hilux are some of those car models that are limitless in almost every detail of vehicle, but most of us look for an exterior look, a fuel-efficient vehicle, and disregard safety features and sometimes interior space.

For a larger fuel tank, the Hilux is superb for a long journey without a refill. If you look for buying one of these vehicles, visit BE FORWARD.