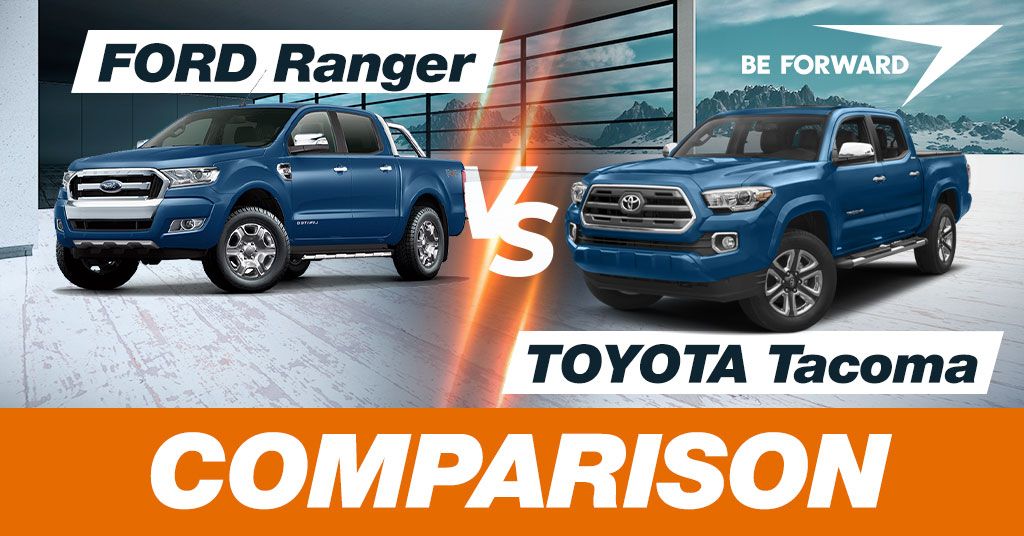 In this review, the information will help you to understand both models in terms of interior, exterior, engine capacity, fuel consumption, and performance. So take the time to pass through this to the end and you will come up with which brand to buy: Ford Ranger or Toyota Tacoma?

The nameplate Ford Ranger has been used on multiple model lines of pickup trucks sold worldwide by Ford from the compact and mid-size pickup category since 1982. Mazda used the Ranger nameplate in some models that were developed for sale outside the North American market. In 2011 the first Ford Ranger based on the T6 platform was introduced.

The latest Ranger has an attractive, tough, and modern look in the back; the tail lamps are LED tail Lamps and embossed tailgate. In front of the Ford Ranger, the bold new grille is flanking, and the C-Clamp-shaped headlamps provide a next-gen Ranger that gives a unique Ranger tough look.

The cabin of the Ranger has a cheap-looking interior, and it’s stingy and good-looking on standard features. The Ranger has comfortable, enough space, and well-positioned seats. It’s also attractive and family-friendly in its large SuperCrew outline. The dashboard is well arranged and designed to give the driver and passenger an easy way to access different buttons on the dashboard.

The Ranger seats provide flexibility in the cabin. Inside, the Ranger can carry larger luggage and relax in the cabin in greater comfort. The front row seats are well arranged and positioned which gives an excellent view of the road when cruising. In the first row, there is enough room for both passenger and driver to relax.

The Tacoma is manufactured as a mid-size pickup truck (2005–present) and a compact pickup truck (1995–2004), the vehicle is a 2-door regular cab, 2-door extended cab, and 4-door crew cab. The Tacoma layout is a front-engine, rear-wheel drive, or 4-wheel drive.

The new Tacoma has attractive, modern, and tough-looking features with a well-positioned front grille attached well to the bonnet. All models come fitted with fog lights.

Tacoma’s interior has an up-to-date dashboard design and style with a well-illuminated instrument cluster. The seats are well arranged and placed which provides an excellent view of the road. In the driver row, you will find a large space for both passenger and driver to rest.

In the cabin, you will find storage facilities that are for storing items such as handbags, goggles, smartphones, and beverages. In the front row, you will find door panel storage, a center box, a glovebox, and 3 cup holders. In the passenger row, there is storage on the door storage panel only.

Depending on the engine size, model, and year of manufacture the fuel economy is around 9.5 Km/L on the highway, 8.4 Km/L combined, and 7.6 Km/L in city driving.

Ford and Toyota have been the best compact and mid-sized pick-up trucks with plenty of power with comfortability but Toyota has well-known compact pick-up trucks such as Toyota Hilux double cabin and single cabin, Toyota Tundra, and Toyota Tacoma while Ford has Ford Ranger.

The Ford Ranger and the Tacoma are some of those car models that are uncountable in almost every detail of vehicle, but most of us look for the fuel efficiency of the vehicle and exterior appearance while disregarding safety features and sometimes interior space.

After reading this review, we hope you get enough useful information regarding these two Ford Ranger and Toyota Tacoma and the choice remains yours. You can buy one of these brands by visiting BE FORWARD.