Skip to content
TOP  >  Car Comparison  >  Hatchback vs SUV - Which is Right for You? 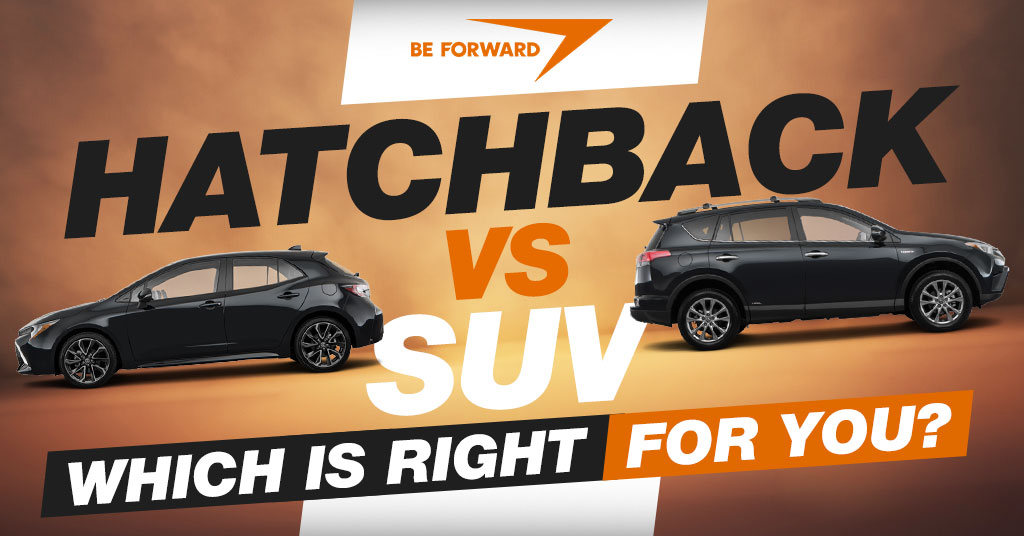 Introduction
Understanding all types of cars, their features, and their differences is quite hard as well as confusing in some way. But knowing their differences may help you choose what type of car is right and good for you. After all, it will be based on your style, needs, purpose, and financial limitations on how you will pick the car of your dreams. Now, let us start with hatchback and SUV. In one look, both look alike in appearance and offer great qualities and features which make them popular to the customers but once you take a closer look, you can see the distinctions between the two.

In this article, we will talk about the differences between the hatchback and SUV. And maybe along the way, you have already chosen what body style is best for you.

The Differences Between Hatchback And SUV

When it comes to space in the passenger cabin or cargo area, the first we think of is SUV or hatchback. They both provide plenty of space with enough headroom and legroom as well as great features, fuel efficiency, reliability, powerful engine options, and safety which we all want for our car.
Now, let us first take a look at a hatchback.

A hatchback offers a three or five-door layout with a roof-hinged rear hatch which provides easy access to the cargo area and is built to sit lower on the ground than an SUV. The hatchback is also much easier to handle and stable due to its lower center of gravity. It offers several engine options, enough space for headroom and legroom, much deeper boot space, and hatchbacks are more often less expensive than SUVs.

The SUV is quite similar to hatchbacks with a five-door layout and can accommodate five or seven passengers but much taller, bigger, and offer the same purpose as carrying passengers and cargo comfortably. Though some SUVs offer off-road performance, towing ability, and can also be driven in any harsh condition which makes them more popular among car buyers. It also tends to be more expensive than the hatchbacks but the features and driving experience it offers are worth every penny.

Top 3 Hatchbacks in BE FORWARD

Toyota Vitz is a three / five-door hatchback that can accommodate five passengers which were first manufactured in 1999. The Vitz is available in a front-wheel-drive / four-wheel-drive layout with a 2510 mm wheelbase and equipped with a 1.0L 1KR-FE straight 3 engine, 1.3L 1NR-FKE straight 4 engine, and 1.5L 1NZ-FE straight 4 petrol engine mated either with CVT or a five-speed manual transmission. The Vitz offers an average fuel economy between 18.0 km/L – 25.0 km/L.

Honda Fit hatchback is a five-door subcompact car with a four-wheel-drive / front-wheel-drive layout which was released in 2001 and offers a 2530 mm wheelbase. The Fit is equipped with a 1.3L L13B or 1.5L L15B straight 4 petrol engine attached to a five-speed / six-speed manual or CVT delivering fuel economy between 19.2 km/L – 24.6 km/L. And a 1.5L LEB Atkinson cycle DOHC i-VTEC straight-4 petrol-hybrid engine coupled with Sport Hybrid i-DCD, IPU with a built-in lithium-ion battery, and seven-speed dual-clutch transmission.

Top 3 SUVs in BE FORWARD

Toyota Harrier is a five-door compact mid-size crossover SUV with a front-wheel-drive / four-wheel drive layout which was first released in December 1997 and is now in its fourth generation. It currently has a 2,660 mm wheelbase and comes fitted with a 2.0L 3ZR-FAE straight 4 petrol engine ranging 149 hp mated to a Super CVT-i with seven-speed simulation delivering fuel economy of 16.0 km/L, and a 2.5L 2AR-FXE straight 4 hybrid engine ranging 150 hp with an eCVT gearbox.

Both hatchback and SUVs are perfect family cars with great features and qualities that make them stand out among car buyers. So choosing between the two is quite hard, for each of them offers great attributes that make them desirable. And you cannot say that the hatchback is much better than the SUV or vice versa. Picking the body style still depends on your preferences, budget limit, and what type of car you like. If you want a big car with space, that offers an off-road ability for your adventurous trips, and you certainly do not lack money then why not try the SUV. It is best for any harsh weather condition and has good off-road features for your safety and comfortability. You can also try the hatchback if you want a much smaller car with plenty of space. It is best on urban roads which offers a great driving experience when cruising the road and it is absolutely affordable.