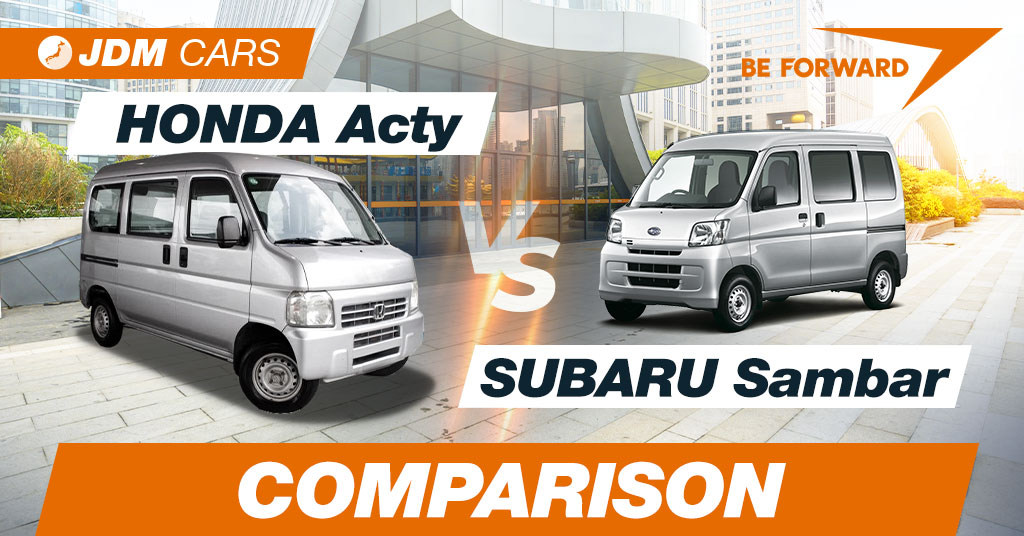 Kei (light automobile) vans are so popular in Japan, and their popularity gave rise to the production of many different models from different companies. In this article, we will compare two models Honda’s Honda Acty versus Subaru’s Subaru Sambar. These two models are tough, dependable, and economical workhorses that have proven their worth for a very long time. We will look at the interior and exterior features, practicality, and engine to inform you as a potential buyer to make it easy for you to decide. Please read on.

The Honda Acty is a car that is made to be convenient and cheap and as a result, most of the things that are deemed unnecessary and costly have been omitted to be able to make the car affordable to the masses.

The Honda Acty is a five-door, four-seat van that comes with two seats at the front and a bench for two at the rear. The front seats are comfortable enough and come with a headrest, while the rear bench does not come with a headrest and is not that comfortable nor supportive, but enough to support the passenger for the urban commute.

The three-spoke steering wheel is height adjustable, the binnacle features two big round analog meters, one is a tachometer and the other is a speedometer. There is also the presence of gear selector lights, a fuel gauge, and a trip meter as well. At the top of the center console there are two air vents with the hazard switch to its right, followed by an air direction switch below them. Then you find three rotary climate control buttons followed by a simple radio that can be removed and replaced by a double din radio.

The Acty van has several storage facilities beginning with the glovebox, a tray under the glovebox, door pockets, and dual front cup/bottle holders. The boot area with the rear seat is 6’4” in length, 4’6” in width, and 0’ 11” in height.

The Honda Acty is a Kei car, and thus falls within the Kei car dimension with an exterior length of 11’2”, a width of 4’8”, and a height of 5’7”. With a wheelbase of 7’9” Honda placed the Acty’s tires at the extreme corner of the vehicle to achieve the maximum possible interior space. The front doors open wide enough making it easier for the driver and front passenger to get in and out of the car, the two rear sliding door are so convenient, especially when the is parked in tight spaces, as they don’t open wide but rather slide making it easier for commuters or cargo to embark and disembark. At the rear, the Acty is fitted with a lift gate giving room for loading and unloading of cargo.

The standard safety features of the Acty include Front Airbags, ABS brakes, and seatbelt pretensioners.

The Sambar is a 5-door 4-seat microvan built to be as convenient and cheap as possible. The Sambar features a simple dash with a simple binnacle, fan control, air direction control, radio, double hazard switch, and air vents. The steering wheel height can be adjusted up and down. The front seats are simple but enough to accommodate the driver and passenger comfortably they also feature a headrest.  At the rear, there is a bench seat for two; it’s simple enough to afford the rear passengers some comfort in short urban commutes.

The Sambar offers several storage options such as a glovebox, a central tray between the front seats, and door pockets. The cargo area is large enough to accommodate two mountain bikes comfortably.

The exterior of the Sambar is kept simple with two large headlights at the front, a big windscreen allowing the driver good visibility, a ventilated bumper for engine cooling, the option for a high or regular roof, Sunroof, fog lights, rear LED turning lights, and rear privacy glass.

Safety features included on the Sambar include Airbags, 4-channel ABS, and seatbelts.

The Honda Acty has been in production since early 1977, and its releases came with different engines as listed below.

Subaru commenced the production of the Sambar in 1961. The Sambar is popular for its rear engine and rear-wheel drive with the option of four-wheel drive. The Sambar is currently on its 7th generation and has used different engines throughout as listed below.

Mini Vans are so useful due to their small nature, their small but economical engines, their ease of maneuverability within cities, and their ability to accommodate several passengers. For over 55 years since the Sambar was introduced as the first Kei van, there was no turning back, and Honda seized the opportunity as well by introducing the Acty in 1977. The Acty and the Sambar have proved their worth all these years and from this article, we can see why. We hope this article has brought you to a position where it has become easy to choose between the two, so please visit BE FORWARD and choose the car of your choice from our long list.

ALL HONDA ACTY FOR SALE

ALL SUBARU SAMBAR FOR SALE