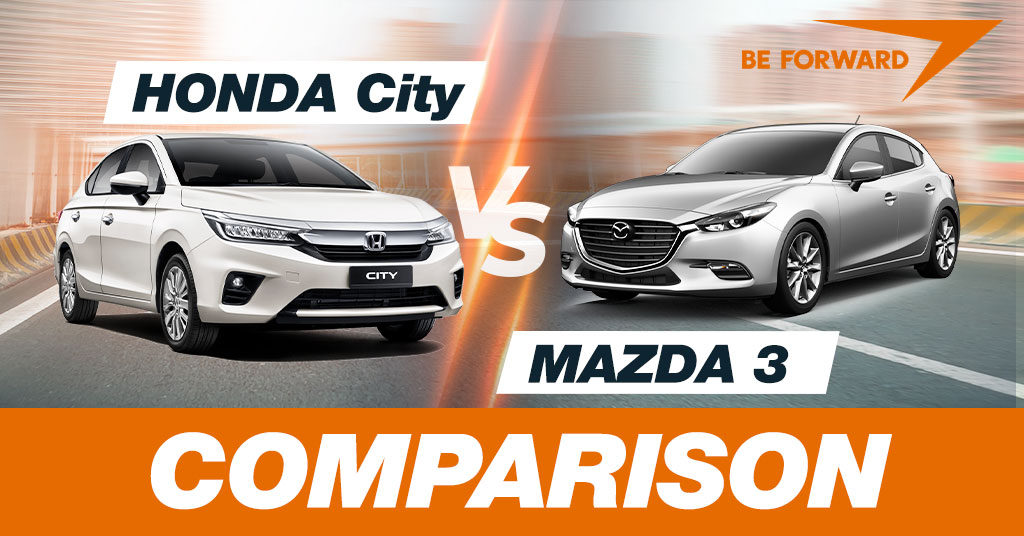 Honda and Mazda are so famous brands, especially in European and other markets. The brilliantly made Mazda3 and Honda City are their best-selling vehicles of theirs. Also, these are popular vehicles in their lineup. Both the Mazda3 and the Honda City were well in the market. Both cars have some more advanced and active features. Be it the performance, appearance, power, speed, or handling. In this article, we will know each brand with their remarks.

N.B: Prices are reflective of average BE FORWARD pricing as of Ocober 2022.

First, the Honda City was a 2-door convertible/3-door hatchback for the Japanese, Australasian, and European markets. In 1994 the production of the three-door Honda City was halted after the 2nd generation and replaced by the Logo. In 1996 the nameplate was revived for use on a series of subcompact four-door sedans aimed primarily at developing markets, first mainly sold in Asia but later also in Australia and Latin America.

According to Honda, the City has good headroom and legroom and it also comes with the back Ultra Seats, which can be configured in four (utility, long, tall and refresh) modes.

Inside, the 2020 Honda City expressions and feels more superior than before. The dashboard design and styling are well-ordered, enjoyable, and simple with chrome outlines, wood inserts, a touch of leather, and back A/C vents. The driver is enjoying a multifunctional steering wheel and a height-adjustable seat.

In the cabin, the Honda City has quite a lot of storage facilities that are useful for storing items such as smartphones, documents, and beverages. In the first seat row, there are two cup holders, center console storage, door panel storage, and a glove box. On the second row, there are 2 cup holders on the fold-down armrest and door pockets storage.

The Honda City has a medium cargo space of 510L which is better for a car of its class.

The latest Honda City exterior is sharper and edgy. The front appearance is impressive with features like a thick chrome strip that stretches from one LED reflector headlight with DRLs to the other. At the back, a shark fin antenna at the top back end, and LED combination taillights.

On the market now the Mazda3 is the best-looking family car; its styling and aggressively sporty design aren’t too far separate from the Kai concept car that 1st appeared at the 2017 Tokyo Motor Show. As with other modern Mazda products like the CX-5 and MX-5, the Mazda3 has been designed to look fast and powerful even at a standstill – and looks far sportier than its competitors. It looks particularly up-market with a handsome appearance.

Mazda3 interior has been considered with the 3’s cabin with best materials. The interior is comfortable and spacious with sufficient head and legroom.

There are numerous storage boxes throughout the cabin that are fit for storing items such as goggles, beverages, smartphones, documents, coins, handbags, etc.; In the front row, there is a storage shelf below the dashboard, a cup holder, door pockets, and a central storage tray.

On the second seat row, there is a front seat pocket, a cup holder attached to an armrest, and storage on the door pockets.

The Mazda3 sedan’s boot is wide and deep; below the compact car, the class averages its capacity of 373.8 liters of cargo space.