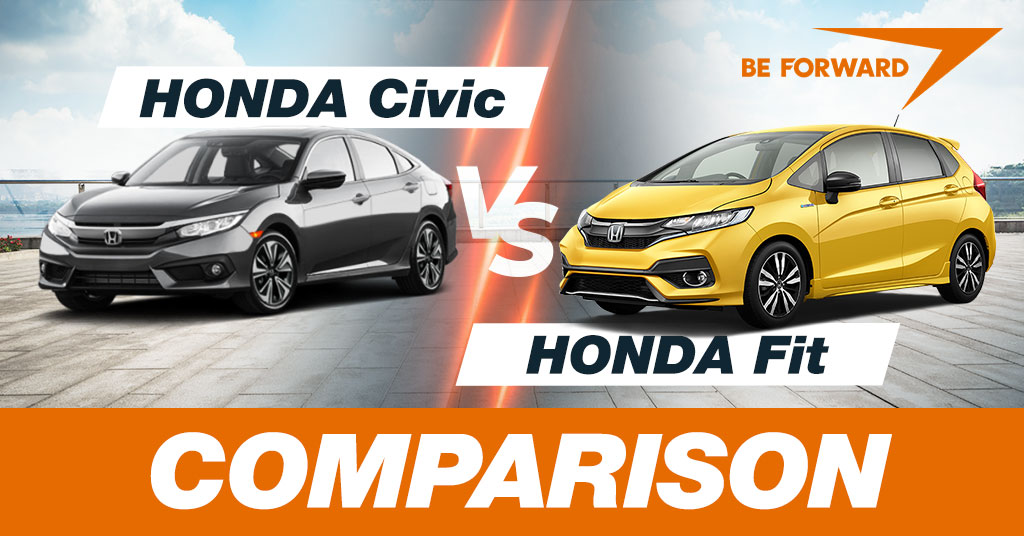 Honda is one of the leading car manufacturers in Japan and in the world. Over the years they have built a reputation for making cars that are safe, reliable, economical, and ahead of their time cars.

Today we are going to compare two of Honda’s great cars to have come out of their production line namely Honda Civic and Honda Fit.

The Honda Civic has excellent outward visibility making it an easy car to operate. Its expansive windows and low hood make the passenger compartment of the Civic feel open and airy. The front seats of the Civic are comfortable while the back seat might feel less so.

The front-seats of the Civic Sedan are excellent for a car in its class, they are great at providing support as a result of its fairly aggressive side bolsters and rigid structure. The Civic coupe’s front seats stretch broad and deep, with headrests that have a doughnut-like opening at the center. Out of all the Civics, the Si hatchback has the best of all front seats that offer comfort on long trips and more aggressive side bolstering for hard driving.

The rear-seats are less roomy, not as comfortable compared to the best in Civics class. Its flat floor (no center tunnel) and the adjustable rear head restraints are a relief. The Civic can accommodate three at the back but two will be much more comfortable. The seats are covered with fabrics that look good and feel great.

Honda Civics cabin is efficient and clean, its instrument panel is inserted beneath a barrel-shaped cowl. The Civic comes with a  four-spoke steering wheel that provides a comfortable grip (the SE trim comes with a leather-wrapped steering wheel). The instrument panel features an oversized analog tachometer with a trip meter underneath it, above it you find a digital speedometer at the center, flanked by a fuel gauge and engine temperature gauge on either side. These gauges might differ depending on the trim such as the sedan which normally has traditional white-on-black, the coupe with silver highlights that glow with amber light at night, the Hybrid with blue lights including a digital fuel mileage display, and the Si which features sport-style black numbers on white gauges, with a bright red Si badge for a splash of color.

The Civic has one of the best A/C and Heating controls in any car, which features rotary dials for temperature and fan speed control with a digital display between them, and airflow control,  A/C, and rear-window defrost button switch stacked beneath. It’s a great design that’s very easy to operate.

The gear shifter of the Si shoots up at an angle from the upper console, just like some of the latest rally cars. At first sight, you might find the looks a bit odd, but the lever is perfectly located for quick and easy gear shifting, almost reminiscent of a formula one car.

Honda has a reputation for encompassing space-efficiency in their designs, and that can be witnessed on the Civic.

The Civic Special Edition comes with a rear-deck spoiler, badges, and unique alloy wheels that separate it from other Civics.

The difference between the Civic sedan and coupe is so obvious although they have the same inner structure and wheelbase. Their exterior panels can’t be interchanged. For a sportier appeal, the coupe has a more aggressive windshield rake and features taillights that light up in a signature pattern. The Civic Hybrid sedan’s appearance is subtly different compared to other four-doors, featuring a deeper spoiler beneath the front bumper, a small spoiler on the trunk lid lip, and alloy wheels that are specifically lightweight for the Hybrid model.The hatchback Civic Si divides people, some find it ugly, some love and defend it. Its windshield is flat, huge, and steeply raked with a radically sloped down nose, with these combined they generate outstanding aerodynamics but also give great outward visibility.

The Civic has a good score on the National Highway Traffic Safety Administration’s crash test.

The center console of the Fit is fitted with a 6.5 inch colored screen Internavi (HDD Navigation) system with built-in TV and FM radio functions (newer models come with a 7.0-inch touchscreen with Apple CarPlay and Android Auto capability). Above the screen, there are two A/C vents, and to the right of the screen, there is the hazard light switch, followed by two rotary control dials for temperature and fan speed, and the air direction control dial just beneath. In front of the gear shift, there are two cup holders, you also get some storage space on the front doors, and a storage tray under the front passenger seat. The instrument panel features a big analog speedometer at the center with a small digital odometer at its center, flanked by a small analog tachometer to the left and an analog fuel gauge to the right with a seatbelt and gear selection light. Other features include a telescopic steering column, active head restraints, and driver’s footrest.

The Fit is offered mostly as a five-door hatchback, it’s the smallest in Honda’s model lineup, it’s almost the same width and length as the Civic.At a glance, due to its tall dimensions, look like a trimmed-down minivan. Fit is appealing it features contour like lines that flow from the nose to the grille and headlights giving it a unique feel, small side windows ahead of the front doors for greater visibility, and on the sides, its contoured body is well designed with side moldings that protect the doors from ding and make the car more stylish. At the rear, the presence of the LED brake lights and the spoiler at the top of the tailgate extends the Fit’s uniqueness but also improves the car’s aerodynamics.

The Civic DX and LX models have great fuel economy, delivering an average of 14.88 KM/L with the manual transmission.

The four-speed automatic transmission is slow at shift down and it prefers the engine to operate at slower revolutions. So if you need something quicker, you can opt for models with a manual transmission.

The EX sedan and coupe accelerate much faster as they are equipped with the more powerful i-VTEC (VTEC) engine. Driving a Civic EX sedan with a five-speed manual transmission is an exhilarating experience. It responds well at any speed, thanks to the VTEC engine with its broad powerband. The four-speed automatic also responds well when attached to the VTEC engine, with smooth shifts and utilization of the extra torque.

The most fun to drive of the Civic’s is the Si hatchback. Driving the Si in urban areas is so enthralling and tractable. Equipped withHonda’s latest i-VTEC engine that is tuned for torque, the Si can accelerate from 0 – 100 KPH (0 – 62 MPH) in 6.2 seconds.

The Honda Fit was introduced in the year 2001, with the earlier models coming with Honda’s L-series engines with the eight-valve i-DSI (Intelligent Dual and Sequential) technology, but since then several engines have been used on different Fit models as listed below.

These engines are so economical when it comes to fuel consumption, this is a result of having two spark plugs per cylinder system which burns petrol completely; eventually resulting in the reduction of fuel consumption and emissions levels.

These engines transfer power to the wheels via a 5-speed manual, 5-speed automatic, and or a CVT transmission.

Honda over the years has built a reputation for manufacturing great cars, and the Honda Civic and Honda Fit are two of those. That can be evident from this article.

After perusing this article I am sure you’ll have a better picture regarding the two great cars and will be able to make an informed decision on which of the two to go for.

For further details on the Honda Fit, please visit the below link.

ALL HONDA CIVIC FOR SALE

ALL HONDA FIT FOR SALE