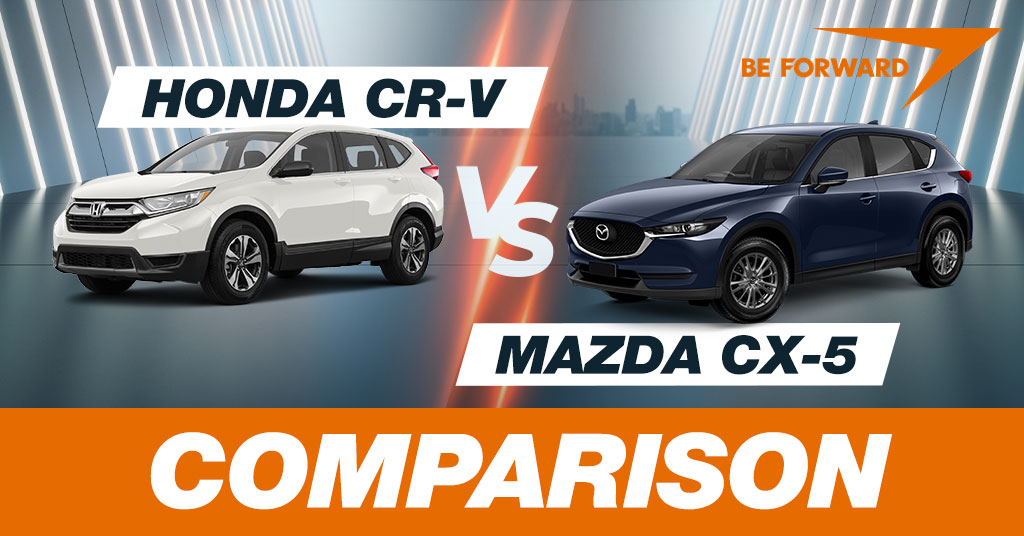 (*Prices are reflective of average BE FORWARD pricings as of September 2020.)

The interior of the CR-V has a simple, streamlined look; the cabin is a tranquil and comfortable place to spend time in. It has five seats with a choice of standard cloth upholstery, and leather as an option. There is enough head and legroom on both the front and back seats, which qualifies the CR-V as a spacious five-seater.
The center console runs from above with a 5-inch Intelligent Multi-Information Display (i-MID)  audio screen that also serves as a trip-computer mounted at the top flanked by two A/C vents on either side and climate controls below the audio controls then the gear shifter. Between the front seats, you get two cup holders, a tray that can handle mobile phones and other small stuff, a USB port, and two storage compartments.
The CR-V has very impressive cargo space; with the rear seats folded flat, you get an impressive 1053.4-liters (589-liters when rear seats are up) of cargo space. Some models come with a side cargo net, and EX trims and above feature a removable and retractable cargo cover.
Other standard features of the CR-V include a CD player, Bluetooth, a four-speaker audio system, an auxiliary audio input, and a USB port.

The exterior design of the CR-V has evolved over the years, with obvious refinement on the front and rear fascia. Depending on how you see it, the CR-V is understatedly attractive. Its cleaner and car-like design, bulgy fender flares give it solid looks on the road.
The side windows of the CR-V are tapered giving it some sporty looks and at the rear, the unique liftgate is designed in such a way that it runs over into the bumper providing a lower cargo entryway.  The tall high-mounted tail lights mounted on either side of the rear tailgate are distinctive.

The Mazda CX-5 has a wheelbase of 2698mm. It’s one of the longest in the CUV category, and this resulted in an ample interior, enough space to accommodate 3 full-size adults on the rear seat with enough legroom. The front seats are high enough to accommodate big feet comfortably. The earlier CX-5 came with a 403-liter (442-liter for 2017 and later models) boot that is expandable to 1560-liter by folding the rear seats flat.
The CX-5 has a quiet cabin that is stylish, functional, and practical. The new CX-5 also comes with Mazda’s Multimedia Commander which features rotary dials between its front seats. This links up with an infotainment system with a 7-inch touch screen color display simplifying the switching process between functions and Bluetooth connectivity.
Beneath the display, there are two A/C vents followed by a smart set of dials for climate control.

The CX-5 features Mazda’s shield grille with five bars. The presence of adaptive LED (auto-leveling) headlights with half-moon designed daytime running lights add to that LED fog lights and 19-inch alloy wheels.
Another feature of the CX-5 is the power liftgate that can be remotely controlled.

From this review, we can undoubtedly arrive at the conclusion that the Honda CR-V and the Mazda CX-5 are two great cars, and whichever one you end up buying there will be no regrets. We hope this article will serve you well and help you arrive at that conclusion.

You can visit the following links for in-depth coverage of each car:

ALL MAZDA CX-5 FOR SALE