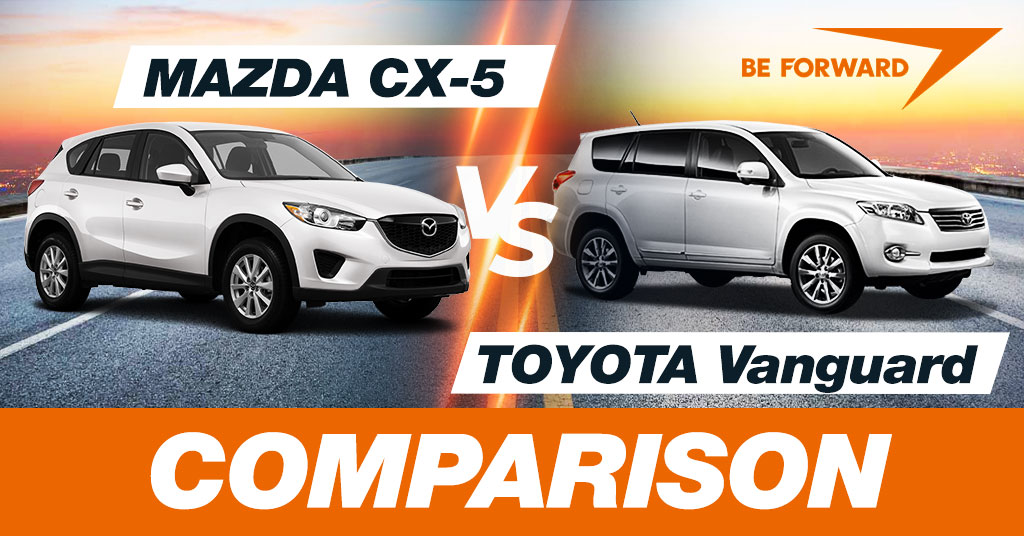 One of the segments in the auto industry that has witnessed considerable growth over the years is the compact SUV segment. As a result, almost every car manufacturer didn’t want to miss this opportunity by offering a model to cover this market segment. In this article, we are going to take a look at two models, the Mazda CX-5 and Toyota Vanguard. We will take a look at the interior, exterior, under the hood, and practicality hoping it will help shed some light for the buyer.

The CX-5 features a classic and practical interior. Its cabin is roomy with ample legroom and headroom enough to accommodate six-foot-tall passengers at the front and rear. The interior finishing is adorned with plenty of soft material, with the upper and lower dash separated by a slim horizontal bar.

At the top of the center of the dash, you get a 7.0-inch touchscreen infotainment system with satellite navigation and a rotary control dial at the center console. This system also offers Apple CarPlay, Android Auto, Bluetooth connection that enables making calls or listening to music from your phone through the car’s system, and screen mirroring that enables you to see/access your phone apps via the car screen.

The CX-5 comes with 6-speakers as standard while the higher specs come with a 10-speakers Bose stereo system.

The CX-5 offers plenty of storage space with front door pockets and bottle holders, a glove box, two cup holders at the center console, a front seat pocket, a small tray in front of the gear shift, and a 506-liter boot plus some extra 20-liters under the floor.

The CX-5’s Kodo-themed exterior has an aesthetic nature that is appealing and catches almost every eye. The vertical, large grille glides seamlessly over the LED headlamps that are standard depicting looks with more depth and sophistication. At the rear, the taillights are narrow, and the bumper is simple.

The Vanguard is well designed and is one of the roomiest in the compact crossover SUVs capable of accommodating five to seven passengers. In the 5 seater models, the Vanguard can accommodate 5 adults comfortably with enough legroom, headroom, and foot room although the one sitting in the center of the rear seat might be a little cramped. The rear seat can slide back and forth, with the option of splitting and folding making it versatile in carrying passengers and cargo as needed. In the seven-seat model, there is a third row with two extra seats fitted behind the back seats, but these seats are desirable for children and adults will struggle for space.

The Vanguard has an inviting two-tier instrument panel, comfortable seats, plenty of storage spaces, and the driver has an upright driving position.

The boot area is massive in the 5-seat configuration but almost disappears when the third-row is used.

Other interior features include A/C, a 7-inch AM/FMCD/DVD and MP3/WMA player, and a Navigation system.

The Vanguard is almost identical to its smaller sibling the RAV4. It features a smoothly curved body and a well-rounded exterior design.

The chrome-plated grille is flanked by contoured headlights on either side with chrome housed driving lights on the edges of the bumper below.

The Vanguard has a good safety rating from the IIHS. It scored 4 and 5-star in federal crash tests and “good” which is the highest rating from IIHS for frontal and “marginal” for seat-based rear impact category.

The Mazda CX-5 was released in 2012 and is now on its 2nd generation. Over these two generations, the CX-5 has been equipped with a couple of engines and transmission as seen below.

These engines transferred power to the wheels via a 6-speed automatic or 6-speed manual SKYACTIV-DRIVE transmission with 4WD or FWD drive options.

The production of the Toyota Vanguard commenced in 2007 and ended in 2013. Only one generation with several variations is available. The two available versions are the 240 S and 350 S which feature only two engine options as seen below.

From this comparison article, we all agree that the CX-5 and the Vanguard are both great crossover utility vehicles with plenty of features. As we saw these two cars offer enormous interior space for passenger comfort, they offer plenty of safety features for that safe ride and they are both great at fuel economics. For a buyer who is looking forward to buying any of these two, that will surely be money well spent. But if you need a car that can accommodate more than 5 passengers, then you’ll have to go for the Vanguard as the CX-5 does not have the extra row with extra seats.

ALL MAZDA CX-5 FOR SALE

One thought on “Mazda CX-5 vs Toyota Vanguard Comparison”