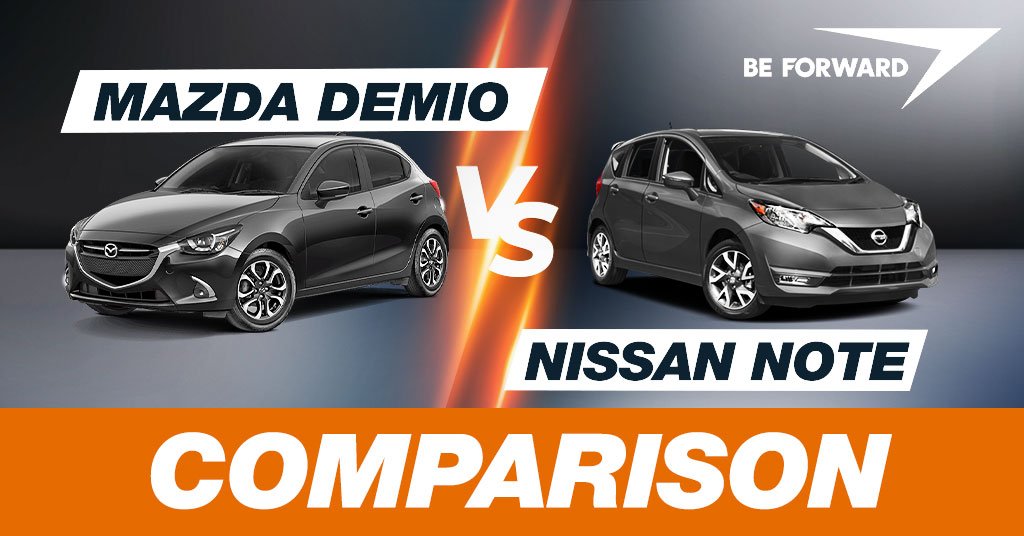 The subcompact hatchback car category is one of the most saturated with so many models to choose from. In this article, we are going to compare two models in this category which are the Mazda Demio and the Nissan Note. We will briefly take a look at how these two hatchbacks fair over each other by taking a look at their interior, exterior, safety, engine, and transmission, hoping that reading it will help to guide you in making an informed decision when planning on buying either of them.

Inside, the interior of the Demio has a larger car feel at the front with a long windscreen, a high driving position and a very pleasant, airy, and quiet cabin. The dash is made of sturdy plastics with a nicely designed instrument cluster behind the steering wheel, with a clear display of the car environment and driving characteristics. Recent models feature an integrated multimedia system with an 8-inch touch screen that seamlessly connects to any Bluetooth device via Bluetooth, plus USB charging points for the passenger and driver.

The seats are covered with some nice cloth upholstery, while mid to high-end models are fitted with some stylish half or full leather upholstery. The front seats are spacious and offer enough legroom and headroom while at the rear, seats are not as generous as the front when it comes to legroom. Depending on how far back the rear seat is positioned, a person of 180 cm might at times struggle for legroom, foot room, and knee room, but not headroom.

The Demio has several storage compartments, starting with a large enough glove compartment, front door pockets and bottle holders, plus two cup holders between the front row seats. At the rear, you get 250-liters of boot space with seats up, but with seats folded, you get enough space to fit a mountain bike.

The Demio is cute and appealing with its exterior featuring a  sharp and compact styling. At the front, it features a large grille with eagle-eye headlights. At the rear, it is neatly designed with a spoiler at the top of the tailgate. Some models come with LED daytime running lights improving their looks.

The earlier Demios just like many other models did not feature today’s technological safety features. As standard, they only came with the driver side airbag and seat belts for all passengers.

The Note comes with a pair of comfortable four-way adjustable front seats as standard with considerable passenger space. The rear seats complement the front seats by offering equally pleasing accommodation with enough headroom, knee room, and legroom for an adult of any size. The seats come covered with cloth upholstery as standard with leather or faux suede as an option for higher trims.

The Note comes with a four-speaker audio system with a 7.0-inch touch screen and Bluetooth connectivity. The high-end models are fitted with a Rockford Fosgate system which includes an amplifier and two 6.0-inch subwoofers fitted in the boot.

The Note is never short on storage space, it has lots of space to handle lots of luggage when needed. Some of the storage spaces include door pockets and bottle holders on the front doors, cup holders between the front row seats, glove compartment, seat pockets, and a storage tray beneath the front passenger seat. At the rear, there is a large boot that can be expanded by folding the rear seats.

The Note is a stylish vehicle with a dynamic silhouette. At the front, the Note has a V-Motif grille with swept-back headlights. The Note’s sleek and curvy design gives it an energetic, distinct, and catchy look, and the addition of flared wheel arches on the sides gives it that extra edge. The Note comes fitted with 15-inch metal rims with caps as standard or 16-inch alloy wheels.

The most recent (2019 and 2020) models of the Note have not been tested by the IIHS nor NHTSA, but previous models received great scores from these institutions. The previous models came with several safety features such as the Nissan Safety Shield which incorporates a 360-degree camera, lane-departure warning, parking sensors, blind-spot assistance, and moving object detection, plus 4 airbags, electronic stability control, ABS,  remote central locking, cruise control, and seatbelt reminder buzzer.

The 1st generation Demio came with:

These engines transferred power to the wheels via a 4-speed automatic or 5-speed manual transmission.

The 2nd generation Demio came with:

In addition, Mazda introduced e-4WD that utilized an electric motor that operates like the one installed in hybrid cars to power the rear wheels when that extra traction is needed.

The 3rd generation Demio came with:

In addition, the inline 1.3-liter ZJ-VE and the 1.5-liter ZY-VE engines were still used.

This engine transferred power to the wheels via a 4-speed auto, 5-speed manual, or CVT transmissions.

The 4th generation Demio came with:

The 1st generation Note came with:

These engines transfer power to the wheels via a 5-speed manual, 4-speed automatic, and Xtronic CVT transmission.

The 2nd generation Note came with:

The 3rd generation Note came with:

From this article, we have learned that the Nissan Note and Mazda Demio are two suitable hatchbacks that will prove to be a good buy for shoppers or young drivers on a tight budget. The Note and the Demio are among the most affordable vehicles around, even though they might not appeal to some, but those whose primary concern is saving money and commuting from point A to B will appreciate their frugal fuel economy and comfortable ride quality.

ALL MAZDA DEMIO FOR SALE

ALL NISSAN NOTE FOR SALE