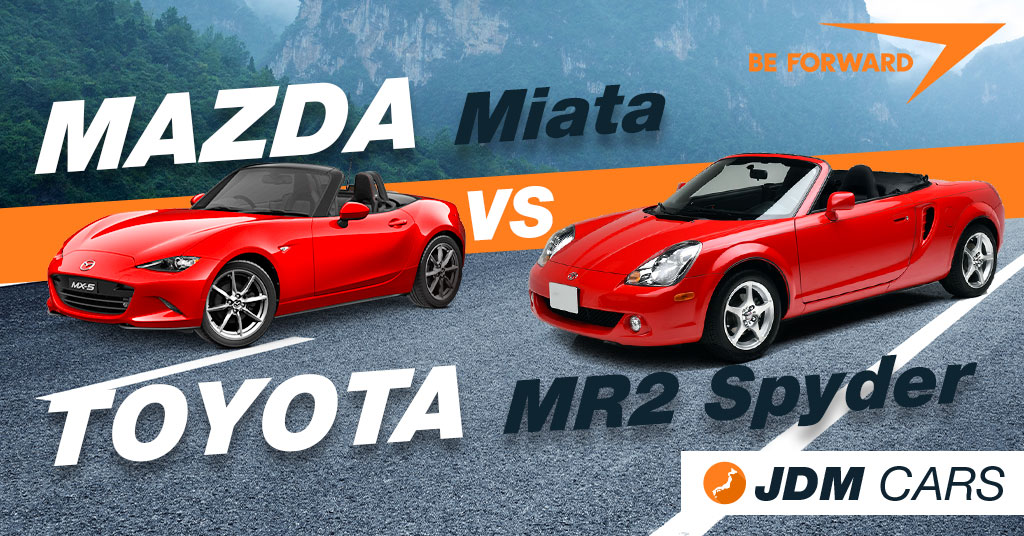 There are many success stories, but there are unique success stories in the automotive industry, and the Mazda Miata and Toyota MR2 are one of those. In 1989 Mazda released the Mazda Miata (aka MX-5/Roadster in other markets), which will become the biggest selling two-seat roadster. Prior to Mazda’s introduction of the Miata, Toyota introduced the Toyota MR2 in 1989. The small, light, and nimble Miata and MR2 scored an immediate success as they were a reliable, nice, and cheap alternative to the expensive sports cars. In this article, we are going to walk you through the nitty-gritty details of these success stories.

The MX-5 offers reasonable storage facilities such as the glove box, lockable storage box between the seats, two cup holders, and door bottle holders. The MX-5 has a 150-liter boot as well.

The MX-5 Miata is available as a soft-top or cabriolet. It features an aluminum bonnet and boot lid, headlights with three bulb chambers, a bumper with fog lights, and mesh grilles.

The MX-5 Miata comes with several safety features such as the rollover hoops, front and side airbags with a deactivation switch on the passenger side to be used when a child seat is fitted, grip-enhancing stability and traction control systems, ABS, seatbelts pretensioners, and a bonnet that pops up to protect pedestrians in the event of an impact.

The Toyota MR2 was unveiled in 1984. It was a light, 2-door 2-seat compact mid-engine coupe fitted with a twin-cam 1.6-liter engine. The MR2’s drive layout was primarily a privilege of the supercars but was not anymore as the MR2 kept running costs low. The second-generation MR2 was released in 1990 with a longer and much wider body, but it also featured more extravagant styling, powerful engines, and extra weight. The extra size resulted in extra comfort and improved drivability. In the year 2000 the third generation MR2 commonly known as the MR-S in Japan, MR2 Spyder in the US, and MR2 Roadster in Europe (except France and Belgium) was released.

Despite its small size and the absence of a boot, the MR2-S is not short on storage space. There are door pockets, bottle holders, cup holders, glove box, small storage space under the bonnet, and cubby holes behind the seats that can accommodate small travel bags.

The MR2 Spyders front features a trapezium-shaped bumper, an aggressive front grille, and round fog light incorporated into the bumper adding a sportier look. The dual-bulb headlights enhance the MR2 Roadster’s sporty appearance, while at the rear, the rear lights are covered with red lenses and two oval graphics. Also noticeable from the rear is the big-bore exhaust pipe that identifies the MR2 Spyder as a true performance car.

The Mazda Miata is a front-engine rear-wheel-drive that made use of several engines on its 4 (NA, NB, NC, ND) iterations as listed below.

The MR2 is a mid-engine rear-wheel-drive car that made use of several engines on its 3 (W10, W20, W30) iterations as listed below.

The Mazda MX-5 Miata and the Toyota MR2 Spyder are two perfect open-top two-seaters that are fun to drive and cheap to run. These two cars are famous for offering the traditional thrills of the classic 60s and 70s British sports cars, but also offer the reliability of Japanese cars.

These two cars are available either as a Soft Top which features a folding fabric roof, and a cabriolet with a folding hard-top roof. They are both great options if you are into the thrills of the sports car enthusiasts, but also great cars for daily use.

ALL MAZDA MIATA FOR SALE

ALL TOYOTA MR2 SPYDER FOR SALE