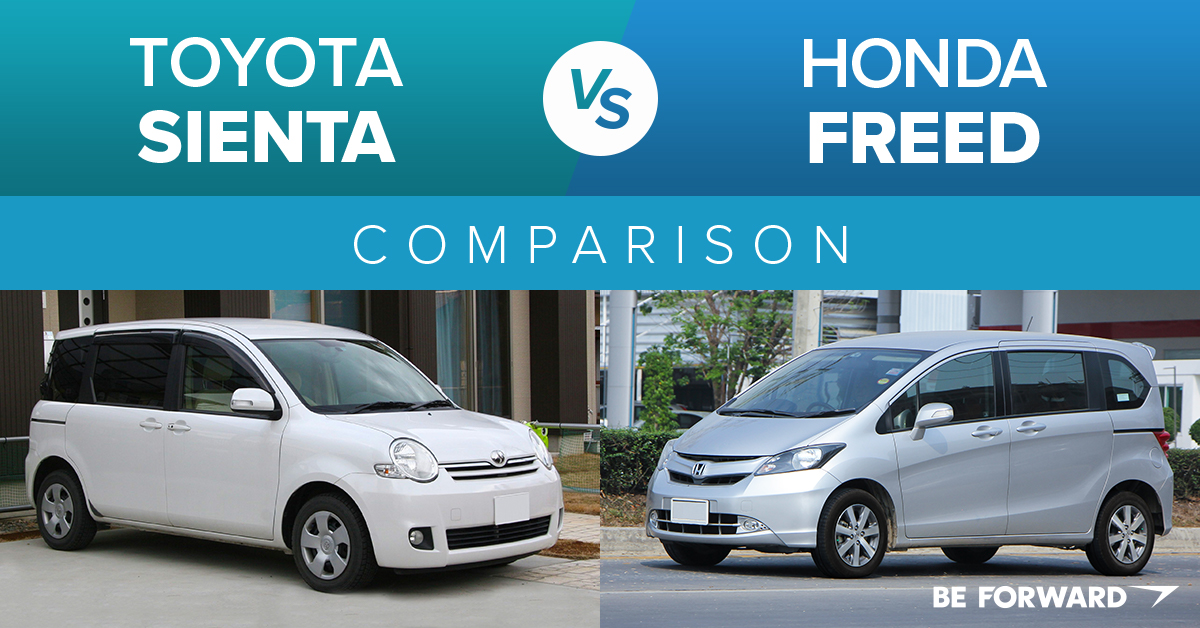 When it comes to choosing a used MPV, or multipurpose van, for your business or family, there are a number of options available. One popular option is a used Toyota Sienta, however another hidden gem comes in the form of a used Honda Freed. Both cars offer similar features, but what sets them apart? Read on to discover the similarities and differences between the Toyota Sienta and Honda Freed in this MPV comparison. 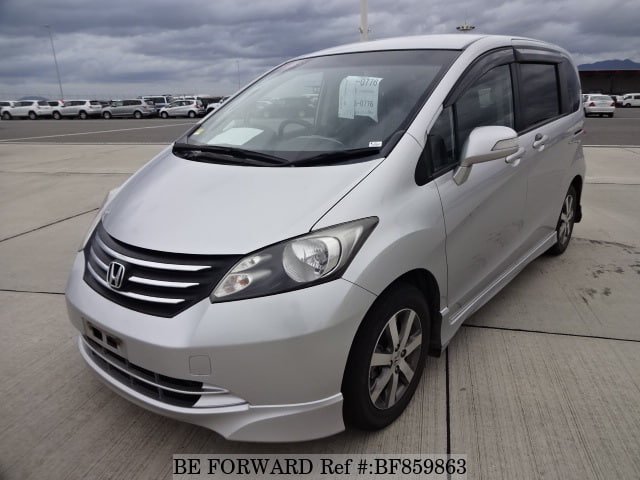 The Honda Freed is a multipurpose van that can be used for long distance driving, urban driving, and medium to large family driving. Now in its 2nd generation since 2016 (GB5), the Freed’s first generation was in production from 2008 to 2016 (GB3/GB4). The Honda Freed also offers different grades and model types including the Freed Spike, which is a sportier version of the Freed with added features such as fog lights and 4WD, as well as the Honda Freed Hybrid and Spike Hybrid which have the same features as their namesakes but come with hybrid engines. 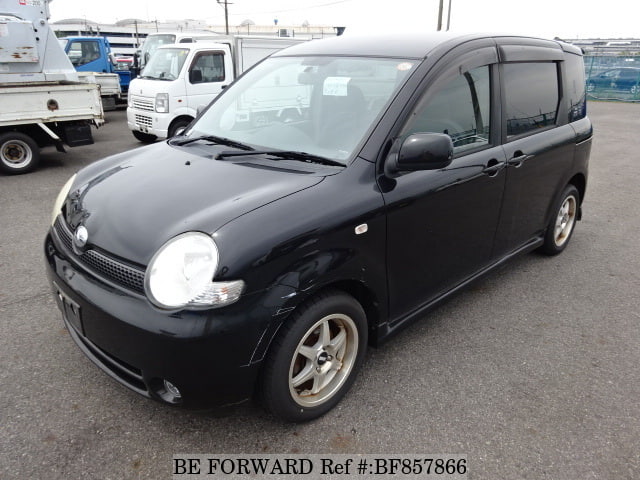 The Toyota Sienta is a 5-door, 7-seater minivan that has been in production in Japan since 2003. Its 1st generation was in production from 2003 to 2015, and its 2nd generation began in 2015 and continues to today. While the Toyota Sienta of 2003 offered a fairly basic yet functional MPV, in 2006 it was given a facelift and more color options were added. This added additional appeal, however the real ground breaker was the 2nd generation Sienta which provided an overhaul of this popular MPV’s features and overall appearance. 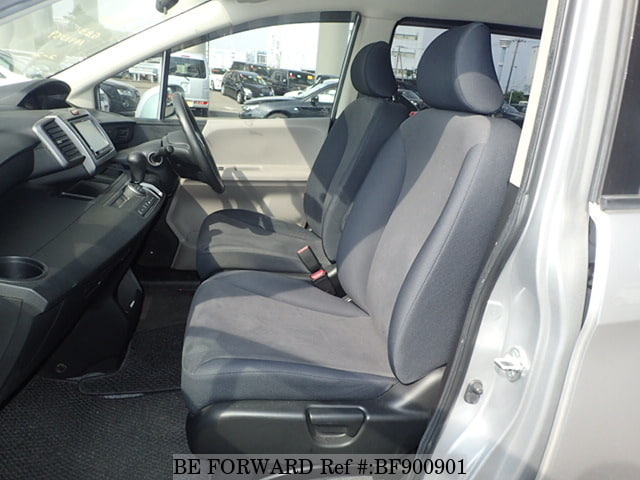 Above: The front interior of a used 2008 Honda Freed

The Honda Freed’s interior is comfortable, spacious, and an overall enjoyable experience. If you are a car enthusiast, you may notice that Toyota often offer function over form in regards to the inside of their vehicles, however Honda on the other hand often provide a richer interior experience —even in less expensive models—and delivers the Freed with a visually appealing interior, despite the generous use of plastic. Similar to the Toyota Sienta, the gearshift is placed on the dashboard, which creates more leg space for the driver and the front passenger, and the Honda Freed also comes with electric mirrors and windows. 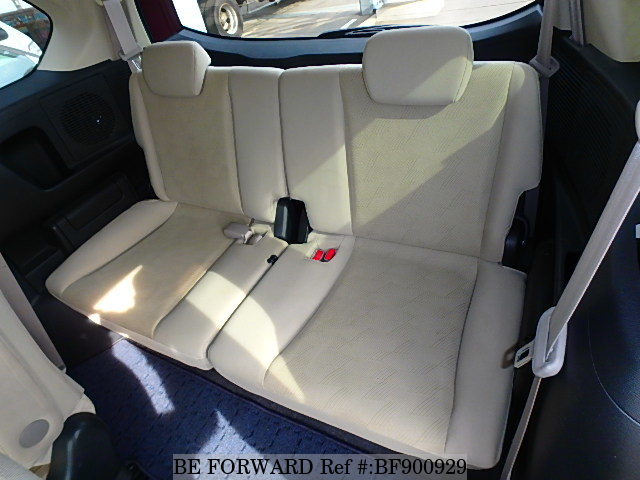 Above: The back interior of a used 2009 Honda Freed

The Freed is a 7-seater MPV with three rows of seats. The first-row seats the driver and another passenger, the second-row seats can fit three passengers comfortably, and the third-row seats have enough space for two adults or kids. The leg and head space are more than enough for even taller adults to travel comfortably. There is enough boot space for storing luggage, however you may find that the addition of third-row seats take up a fair bit of room. However, if you are a small family and you do not need the third-row seats, you can opt to keep them folded to create more boot space. 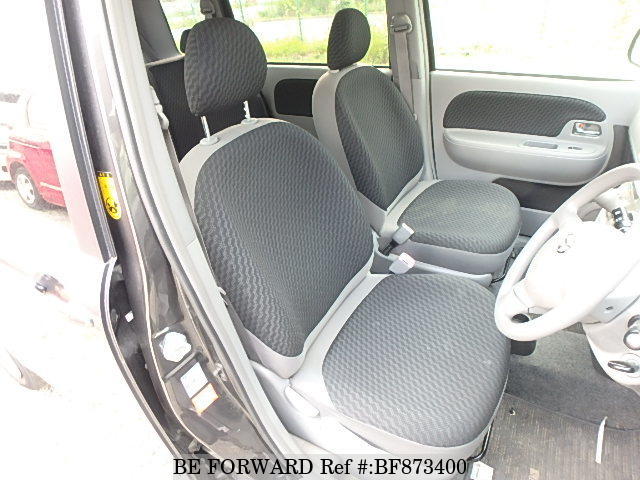 Above: The front interior of a used 2007 Toyota Sienta

If you buy the 1st generation Toyota Sienta, one of the first things you may notice is the spaciousness of its interior. There is lots of legroom and headroom in this minivan, in addition to a compact steering wheel, good all-round driver visibility, and comfortable seating suitable even for a taller driver or passengers. 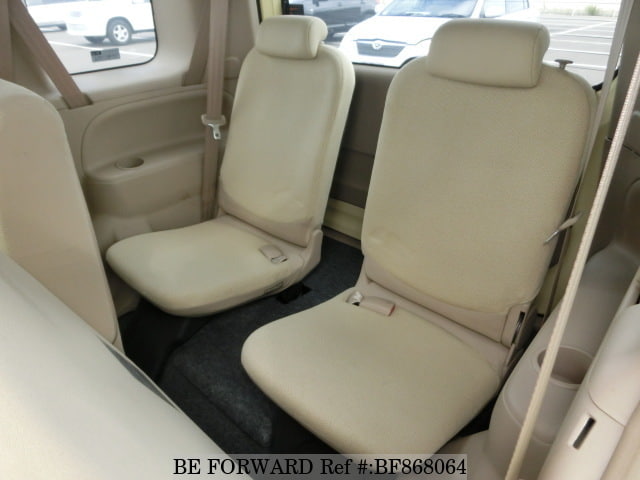 Above: The back interior of a used 2005 Toyota Sienta

Like the Honda Freed, the gearshift is mounted on the dashboard to create more space. One notable feature of the Toyota Sienta is its rear seats, which are attached to a rail and offer the ability to conveniently slide forwards and backwards. When not in use, the smaller third-row seats can be folded and hidden beneath the second-row seats, increasing the amount of boot space available. Additional features of the Sienta include child safety locks, as well as useful electric windows and mirrors. 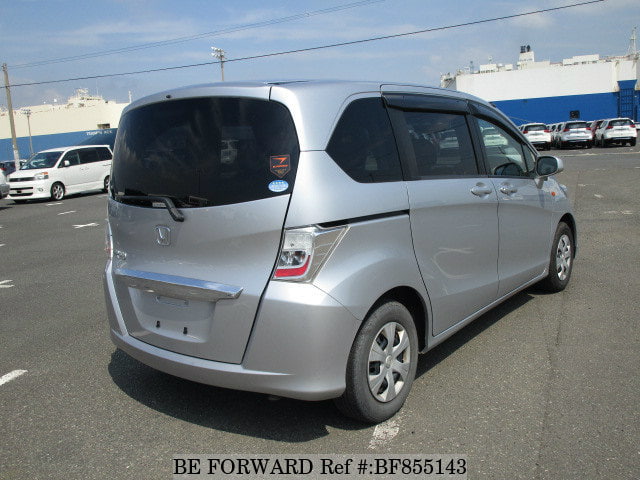 While the design of the Toyota Sienta is on the boxier side, the Honda Freed was deliberately designed to look different from other MPVs with its curvier and sleeker lines. Exterior features include 15-inch alloy rims and fog lights for higher grades, while lower grades generally come with 14-inch steel rims. As with majority of MPVs, the Honda Freed’s ground clearance is 6.5 inches which means you will need to be cautious when traversing rougher terrain and speed bumps. 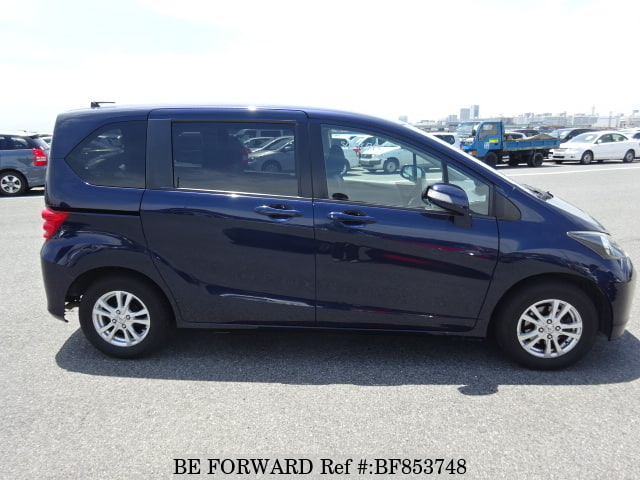 For easy boarding and alighting, the Freed comes with sliding rear doors on both sides. The backdoor lifts upwards to allow you to easily fold or unfold the third-row seats or pack some light luggage into the boot. From the front, the Freed offers medium-sized headlights that blend well into and are level with the body of the vehicle. When comparing the interior and exterior of the Honda Freed vs. the Toyota Sienta, the design of the Freed is better overall. In the case that you care both about looks as well as functionality, the Honda Freed is a good option to consider. 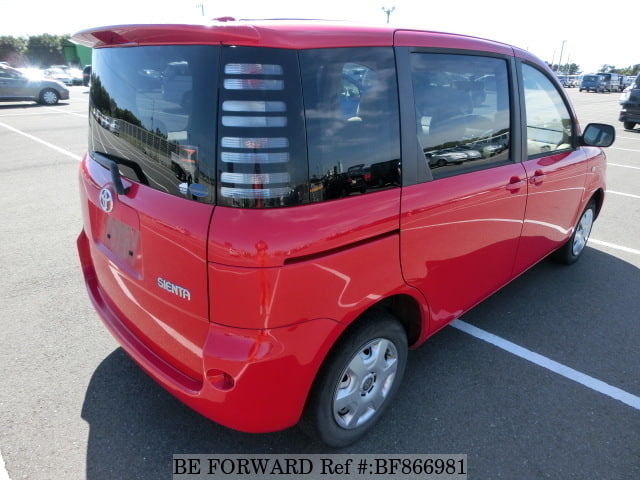 As mentioned above, from its exterior the 1st generation Toyota Sienta displays a boxy appearance with a short nose and bulbous headlights on its front that may not appeal to all, despite the rear being slightly more redeeming. However, the 2nd generation Sienta significantly improves the exterior aesthetics, thanks to the addition of more streamlined headlights and body in general. 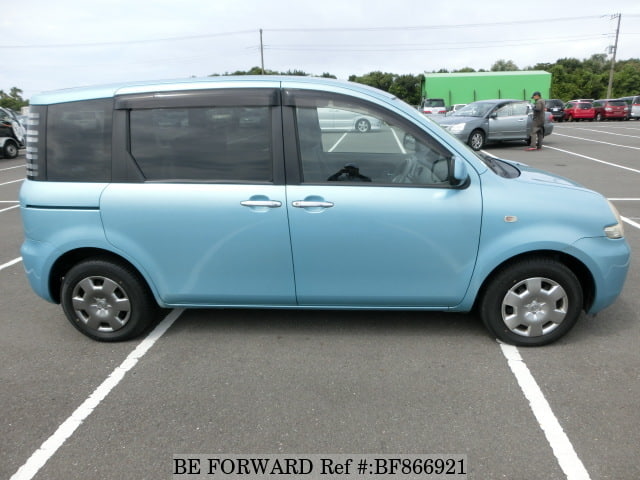 Above: Side of a used 2005 Toyota Sienta

As with the Honda Freed, a low ground clearance means you may have to exercise caution while driving in certain conditions. This 5-door minivan also offers two sliding rear doors, with one door on the left or right (depending on which side of the road you drive on in your country) electrically controlled and the other manually opened and closed.

The 1st generation of the Honda Freed came mainly with a L15A I4, 1.5-liter, 4-cylinder, 118 HP engine and this is the same engine that has been used in the Honda Fit, of course, with some slight differences. This engine is mated to an automatic 5-speed CVT gearbox. 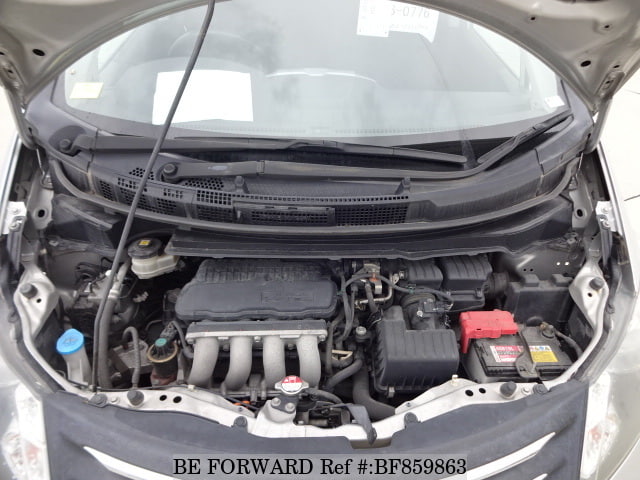 Above: Engine of a used 2011 Honda Freed

The majority of Toyota Sienta models offer a naturally aspirated 4-cylinder, 16-valve 110 HP engine. Even when loaded to the maximum seating capacity of 7 people including the driver, this vehicle moves smoothly and despite its boxy look it handles well on the road with minimal to zero body roll, even around bends. 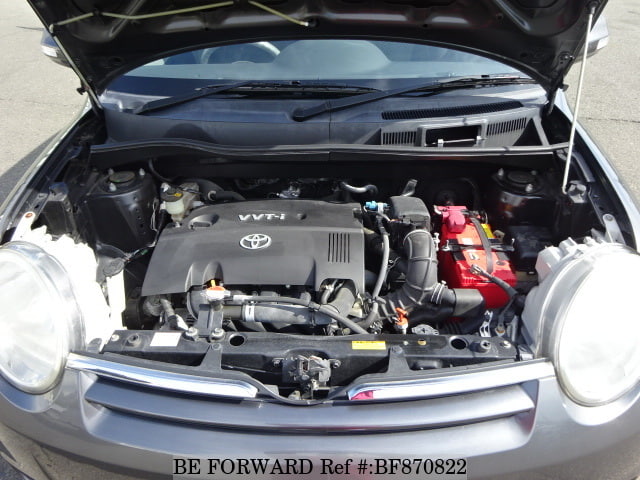 Above: Engine of a used 2008 Toyota Sienta

The engine is mated to a front-wheel-drive drivetrain with a 4-speed automatic gearbox and offers an average fuel consumption from around 10km/L, with newer models even capable of reaching 13km/L or more. The Toyota Sienta’s fuel tank capacity is generally around 42 liters, and it runs on an EFI system fueled by petrol.

Like any other moderately priced MPV from Japan, the safety features included with the Freed cover the basics such as ABS brakes, safety belts for all passengers, dual front airbags, EBD- electronic brakeforce distribution, auto lock for the fuel tank lid, G-force control, and more.

As with the Honda Freed, the Toyota Sienta comes with standard safety features including safety belts for all passengers, ABS brakes, and front impact airbags for the front-row seats. When considering overall safety, both the Toyota Sienta and Honda Freed offer similar features that make them both adequate for protecting the passengers inside.

On BE FORWARD the cost of a used Honda Freed generally ranges between $450 and $2,000. In direct comparison to the average price point of a Toyota Sienta, the Freed offers a less expensive purchase.

On BE FORWARD the cost of a used Toyota Sienta generally ranges between $500 and $3,000. As the 2nd generation of the Sienta offers a better design than its 1st generation, it is usually offered at a slightly higher price point.

It is not so much a battle of supremacy when it comes to the Toyota Sienta vs. Honda Freed, but rather a battle of name recognition and personal preference. While the Toyota Sienta comes from the world’s most recognized car maker, the majority of its models opt more so for functionality and reliability over design. 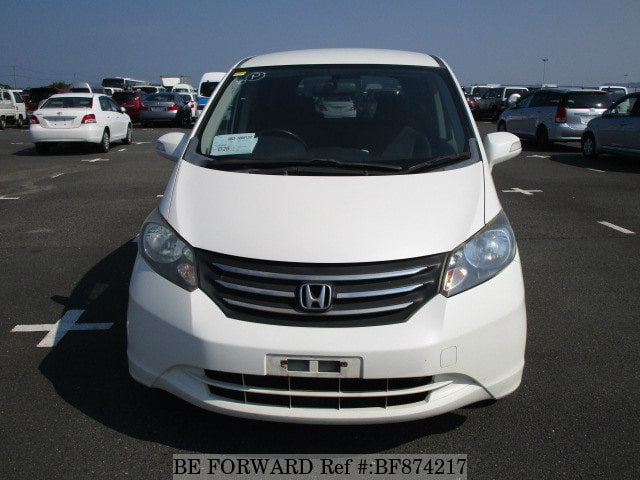 However, the lesser-known Honda Freed combines aesthetics, reliability, functionality and affordability into a multipurpose van that is rare to come across at its price range. While both the Honda Freed and Toyota Sienta are both competent MPVs, those with a design eye looking for a convenient minivan at a modest price may find the Honda Freed a great option to consider.

BE FORWARD: Your Source for High-Quality Used Minivans & More

BE FORWARD offer thousands of high-quality, low-cost used vehicles, with a stock list that is updated daily. Click or tap the button below to browse now!