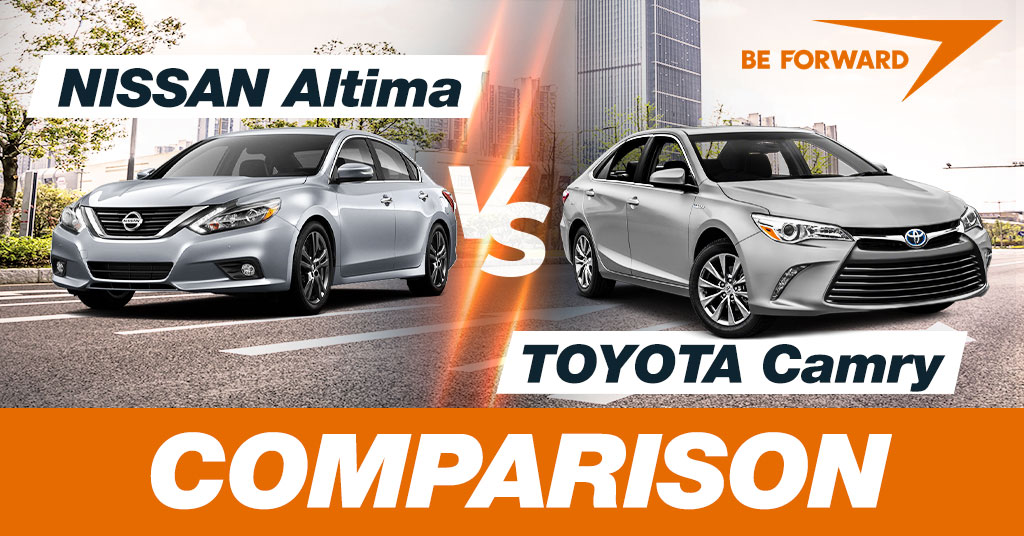 When it comes to the production of luxury sedans Toyota has proven that they are legendary. Their sedans offer power, practicality, and luxury. In the Nissan lineup, the Nissan Altima has proven to have the muscles to compete in the sedan category.

The Toyota Camry and Nissan Altima are two technologically advanced sedans and in this article, you will get to understand what makes these two articles great by taking a look at their interior, exterior, engine capacity, engine performance, and safety features. If you love sedans, it is hard to reject the interior, engine performance, exterior looks, and safety features when comparing the Nissan Altima vs Toyota Camry.

N.B: Prices are reflective of average BE FORWARD prices as of June 2022

The Nissan Altima is a mid-size car manufactured by Nissan Motors since 1992. The Altima has historically been a large car while offering more power and luxury.

The Altima has adequate interior space and is more than competent and has several strong qualities. It looks sharp, roomy, and comfortable. In the rear seat, 3 adults can comfortably fit with enough legroom and headroom.

The 2019 Altima has a cargo space of about 15.4 cubic feet, which is reasonable for the level of its class. The wide cargo area opening makes it easy to load bulky items, but the boot hinges may hinder cargo flexibility.

The 2019 Altima exterior styling has been designed with a taller grille and rectangular headlights. Along the sides, for an exciting new exterior appearance, the Altima has character lines in the license plate area. Nissan has reshaped the front bumper area completely by adding taillights that are more streamlined.

Since 1982, the Toyota Camry is sold internationally by the Japanese auto manufacturer Toyota, spanning multiple generations.  Since the 1990s the Camry has developed to fit the mid-size classification (wide-body)—although the 2 widths co-existed in that decade. Originally Camry is a compact in size (narrow-body).

The Camry nameplate was delegated to a 4 door sedan model in Japan between 1979 and 1982, known as the Celica Camry. In 1982 Camry became an independent model line with the V10 series, Camry was available as a 5-door liftback in addition to the sedan.

The Toyota Camry has a spacious and luxurious cabin, and there’s sufficient interior storage in both its trunk and in its cabin with the back seat folded. Inside, the latest Camry comes fitted with Toyota’s touchscreen infotainment system—called Entune 3.0, Bluetooth, etc.

Inside the cabin, there are several storage facilities that are useful for keeping items such as beverages, goggles, smartphones, handbags, etc. In the 1st row there are 2 cup-holders, door pockets, glovebox, and center box while in the 2nd row, you will have access to door pockets.

Toyota Camry comes with plenty of cargo space in its trunk and in its cabin with the option of folding the back seat for extra space.

(NB: I have swapped Nissan Altima details to the top and Camry below to follow sequence)

The 2019 Altima equipped with a 2.5L engine can produce a maximum output power of 188 hp, the 2.0L engine produces 182 hp, and the 2.0L variable compression turbocharged 4-cylinder engine that replaces the V6 powertrain in the previous generation produces 248 hp.

The Camry XV40 (2006 – 2013) received even greater differentiation between the “regular” model sold in Japan (including internationally) and the “prestige” sold in the rest of Asia. The Camry (sold in Japan and internationally) comes fitted with 4-cylinder engines sold alongside the V6-engined prestige Camry in the Middle East and Oceania as the Toyota Aurion.

Camry’s power comes from a choice of 4 and 6-cylinder engines. The 2AZ-FE 2.4L I4 engine was carried over and produced 158 hp and attached to a 5-speed manual or 5-speed automatic transmission. The 2GR-FE 3.5L V6 in contrast came with a new 6-speed automatic and produced 268 hp