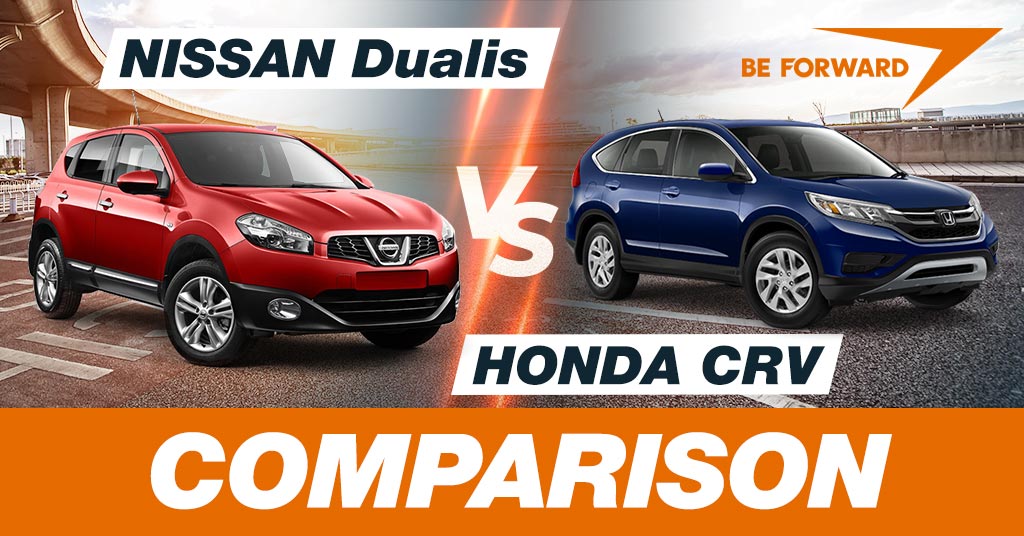 The Nissan Dualis is one of the late entrants in the compact crossover SUV category compared to the Honda CR-V. We can say that it is legendary as it has been around for quite a while now. Although the Dualis has not been around for as long as the CR-V, it has won hearts and has been well received, and has proved and earned its place in the top echelons of the CUVs just like the CR-V. In this article, we are going to compare these two cars by looking at the interior, exterior, power, and practicality. So please read through to find out how these two great cars compare.

The Dualis can be confused with hatchbacks as it bears some resemblance, but the fact is it is not. It is an SUV hatchback hybrid as over and above the hatchbacks, the Dualis offers a ride height that falls in the compact SUV category. It has a lot of appeal and a commanding view of the road.

The standard upholstery is of a smooth washable fabric with leather as an option for the high-end. The front seats are comfortable, have enough legroom, enough headroom, and offer great lumbar support.

The dash and center console are well designed with some good finishing, and the steering wheel is a rake and reach adjustable. The Dualis has a curvy binnacle with two round analog meters and a digital display in between. The two round analog meters are for speed on the right and RPM to the left, while the digital display displays the cabin temperature, clock, trip meter, and odometer. The Center console features a multifunctional five-inch color display for audio control, a CD-tuner with 4 speakers (a six-stack auto-changer CD player with six speakers for the high-end model), satellite navigation, and a rearview camera.

There is ample storage space, you get a 14-liter glove box, a storage drawer under the front passenger seat, two cup-holders between the front seats, and a deep console box of 3.5-liters at the center. You also get bottle holders and door pockets on all four doors.

The boot size is 410-liters, but with the option of the 60/40 split rear seat folding configuration, it can increase to 1513 liters.

The Dualis has a tiny, delicate, and lovely exterior appeal. It features a sedan-like low roofline, a steeply-raked third side window, an oblong-shaped rear window, and short front and rear overhangs.

The Dualis has a compact exterior that gives the impression that the Dualis was designed for the cut and thrust of busy-hour traffic and parallel parking. 16-inch alloy wheels are standard on the Dualis.

The CR-V is spacious and convenient. It offers space for lots of stuff, with comfortable front and back seats. The front seats are generous with respect to headroom and legroom, the rear seats offer enough legroom and headroom as well and are comfortable. The 60/40 rear bench can be slid 6-inches back and forth providing more legroom or luggage space, and all three rear passenger positions have three-point belts and head restraints. The boot is 948-liters with the rear seats in place, and 2038-liters with the seats folded. It’s large enough to accommodate two upright mountain bikes without the need of removing their front wheels. It also has a waterproof storage bin under the boot floor whose lid can be turned into a big, tall, removable, and easy to use picnic table.

On the binnacle, the gauges are in the traditional white numerals with a black background making them easy to read and a digital display that displays outside temperature trip meter, odometer, door open, fuel gauge, coolant temperature gauge, and fuel economy gauge. The adjustable steering-wheel has mounted audio controls, and cruise control is standard.

On the center console, you get an AM/FM/CD/cassette stereo (six-disc in-dash CD changer is standard on the high-end models), A/C and fan control knobs, and a gear shift stick next to them. Between the front seats, there is a collapsible tray and two cup holders plus a recess for a mobile phone. There is also a space that can accommodate CDs and cassettes.

Other features are power windows with rear privacy glass, front, and rear power outlets and

coat hooks above the rear seats.

At the front, the CR-V features a grimacing bottom grille with fog lights on the sides, the wheel arches are a bit bulgy, with the usual sloping C-pillar. At the rear, the CR-V features segmented tail lights that rise alongside the back-end pillars. You get 16” wheels as standard, with the option of 17” alloy wheels.

The Dualis over its two generations has been offered with two engine choices.

If you’re not the one that frequently goes off roading, but you need something that sits you a bit higher from the ground while cruising, then the Nissan Dualis and Honda CR-V will be great choices for you. They both offer car-like driving characters, their styling is funky, and with their raised seating positions they offer a practicality that’s almost similar to that of a real 4×4 with some few downsides. Although the Dualis and CR-V compete in an overcrowded compact crossover SUV market, they are both a good bet if you are looking for reliability, great engineering, robust engines, and affordable BE FORWARD prices.