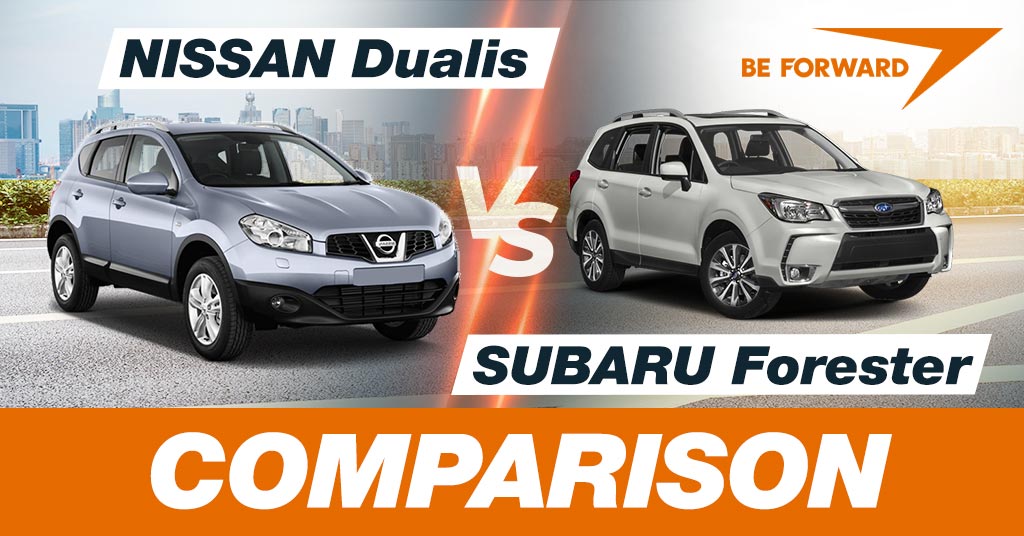 Nissan offered us the X-Trail which is a great car but decided to offer something else to capture the market just below the X-Trail segment and ended up offering the Dualis crossover utility vehicle (CUV). Today we are going to compare the Nissan Dualis with another great crossover utility vehicle by the name of Subaru Forester. We will be comparing these two great cars by looking at their dimensions, performance, interior and exterior design, and practicality.

The Nissan Dualis’ cabin is practical and roomy. It has a well-designed D-shaped three-spoke steering wheel with a rake and reach adjustment. The driving position offers good forward visibility and comfort.

The instrument panel is typically Nissan with crispy white graphics housed in a curvy binnacle that features a round analog tachometer to its left with a small coolant temperature gauge, on the right, there is a round analog speedometer with a small fuel gauge placed within, and on the middle of these two round analog meters, you will find a small digital display that displays the cabin temperature, clock, trip meter and odometer. Other features found on the center console are storage bins, cup holders, and control buttons for A/C, air direction, and fan speed.

On the center console, you will find a 5-inch multifunctional color touchscreen for audio control, reversing camera, and satellite navigation.

The Dualis has enough luggage space, with a 410-liters boot that can be extended by folding the rear seats that can be split-folded into the 60/40 configuration creating a 1513-liters cargo area.

The Dualis is truly a mid-size SUV with a length of 4330 mm, a width of 1783 mm, a height of 1606 mm, and a wheelbase of 2630 mm. At the front, Dualis spots a Nissan badge with the v-motion grille and large headlights on either side. At the rear, the Dualis is fitted with LED backlights, a lift-up tailgate, and 16” or 17” alloy wheels.

The interior of the Forester is comfortable, quiet, spacious, and practical. The low window line makes the interior airy while also giving the occupants great outward visibility.

The Forester has a high driving position with lots of elbow room, legroom, and headroom at the front, and with the dashboard a bit far it makes the interior feel spacious. The rear seat has enough legroom and headroom to make even a 6’0” passenger sit comfortably. The three-spoke steering wheel is fitted with steering-wheel controls for the audio system, and the binnacle comprises of two large round analog meters, one on the left for the tachometer, another on the right for the speedometer with a digital display between them that displays the fuel gauge, open door alert, gear selection light, trip meter, and odometer.

The center console has a small digital display at the top that displays time, cabin temperature, coolant temperature, and rearview camera display. Below this small display, there is a 6.2-inch (7.0-inch on the high-end models) touchscreen infotainment system with Bluetooth pairing, USB connection, four speakers, and HD radio, with air vents on either side. Then audio controls follow below the climate control dials. In front of the gear shift, there is a small storage tray, and between the front seats, there are two cup holders, a parking brake button, and a drive selector dial.

The Forester has generous cargo space, has 974-liters of boot space with the rear seats up, and 2115-liters with the second-row seats folded down in the 60/40-split fold configuration.

The folding down mechanism is very simple, it uses a clever one-button to fold the backseat fully flat, though this feature is not available in all models.

Foresters have always been boxy and angular, and they still are. The latest models feature a big vertical grille with projectile headlights at the front. The Forester has an extra-wide tailgate with a spoiler at the top, with neatly designed rear LED taillights. Foresters come with 17” alloy wheels as standard and 18” alloy wheels for the high-end models.

The Dualis over its two generations has been offered with two engine choices.

The 1st generation Forester came fitted with the engine options below.

These engines transmitted power to the wheels via a 5-speed manual transmission as standard and an optional 4-speed automatic transmission.

The 2nd generation Forester came fitted with the variants of the EJ25 engine below.

The 3rd generation Forester came fitted with the engine options below.

The 4th generation Forester came fitted with the engine options below.

These engines transferred power to the wheels via 4-speed automatic CVT and a 6-speed manual transmission.

The 5th generation Forester came fitted with the engine options below.

These engines transmitted power to the wheels via a six-speed manual or a CVT transmission.

The Nissan Dualis and Subaru Forester were designed to take you places but each one has an edge over the other in certain conditions. These two cars’ wheelbase and exterior dimensions are almost similar, but the Forester has a superior interior space with a boot space that is more than twice that of the Dualis. The headroom for rear passengers is much better for the Forester, especially when the occupants are full-size adults. With these and other factors when considered it makes it easier to decide which car to go for between the two. If your daily car use involve maneuvering in urban tight spaces with few passengers and luggage, then the Dualis will be a great choice, but if your daily car use involve off-roading and with lots of luggage then the Forester is the right car for you with superior engine power, better off-roading abilities and a big boot.