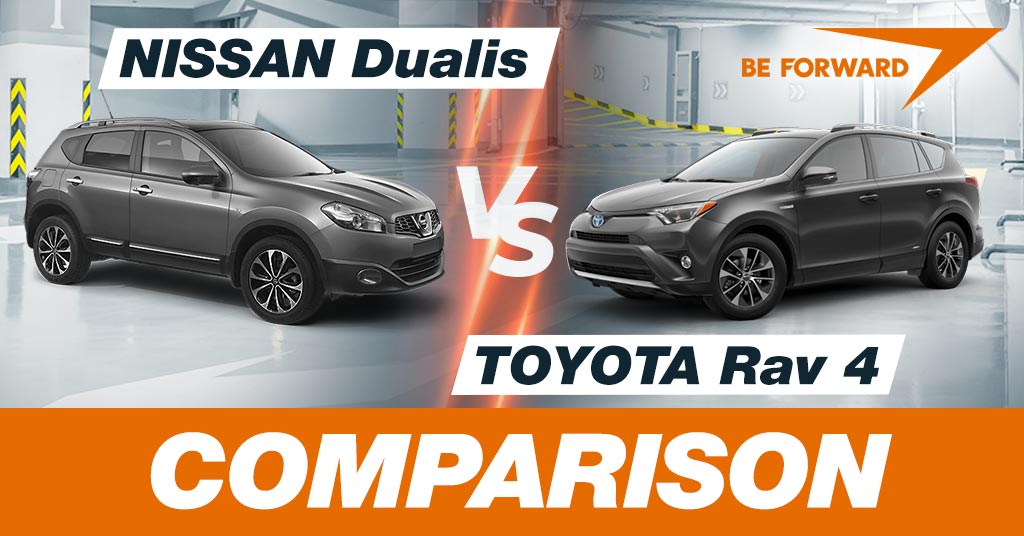 The Nissan Dualis is a compact SUV and one of the late entrants in this category but didn’t shy away from giving the earlier models in this category a run for their money. Today we are going to compare the Nissan Dualis with the Toyota RAV4 which happens to be the pioneer of the compact SUV car category. We are going to compare these two cars by taking a look at their interior, exterior, engine, transmission, practicality, and power. Follow through to find out the verdict

At a glance, the Nissan Dualis looks like a small car with its hatchback looks, but in reality, it is not. The Dualis has a wheelbase of 2630 mm that makes the car spacious with five seats that can comfortably accommodate five adults. The seats are comfy with an SUV like comfiness, with passengers seating at a height that accords them with a great exterior view. At the front, the driver with a height-adjustable seat and the front passenger have sufficient headroom and legroom. The rear bench, also offers excellent knee and foot room with two passengers seating, with three passengers, the one seating at the middle might find legroom a bit limited, especially if it’s a tall passenger. Headroom is also a bit limited at the rear due to the low hatchback like slanting roof.

The Dualis has several storage compartments that can hold items such as tablets, jewelry, smartphones, drinks, and wallets. There are 2 cup-holders and a deep storage bin between the front seats, bottle holders on the doors, a glovebox, a center tray, and small door pockets. The rear passengers get some front seat jacket pockets on both front seats, a fold-down center armrest which is only functional when there are only two passengers occupying the rear seats, and door pockets. The Dualis has a 430-liter boot with rear seats up, and with the seats folded down the boot extends to 1598-liters. The back seats offer a two-way 60/40 flip-down enabling a passenger to seat and some long luggage to be loaded

The Dualis comes with a 3 point steering wheel with audio controls with a rake and reach adjustment. Above the steering, you find a curvy binnacle with three round meters, two large analog meters for one for vehicle speed and the other for engine speed on either side, and a small digital display between them that displays fuel gauge, coolant temperature, selected gear, trip meter and odometer.

The center console features a 5-inch display at the top, followed by two round A/C vents with a hazard light switch, CD/AM/FM tuner, three round control knobs for the fan, air direction, and A/C.

The Dualis has strikingly nice exterior looks that appeal to the young and old, male and female drivers. Listed below are some of the standard exterior features

The RAV4’s interior is spacious, neatly designed, and simple. The RAV4 offers a choice of either 7-seats or 5-seats, with the latter being the most common. These two seating arrangements offer enough legroom, knee room, and headroom, except for the 7-seaters third row which is not ideal for adults. The seats are covered by a combination of Alcantara and smart leather upholstery. The driver is afforded a nice and upright driving position, with a height-adjustable seat.

The mid-row seats can recline for comfort which can be useful on long journeys and they also have a 165mm back and forth slide mechanism that optimizes passenger and cargo space.

With regard to storage, the RAV4 has several storage options in its cabin. Starting at the front where you find two large cup holders at the base of the center console, a glove box, a deep center bin (cubby box) between the front seats, front door pockets, while at the mid-row you also get two cup holders on the fold-down armrest, and jacket pockets behind the front seats. For models with the third row, you get two more cup holders around the wheel arc.

At the back, there is a large cargo area that is easy and simple to configure, you only need to flip a lever to increase the cargo space from 410-liters to a maximum of 1469-liters of cargo space without the need to remove headrests and fold up seat cushions to fold the seats flat. The RAV4 has a low load floor which makes loading and offloading of luggage easier.

The binnacle is easy-to-read with its three overlapping round meters with a black background and white marking/writing. At the center of the binnacle is the speedometer which is the bigger one, on its left flank is the tachometer (RPM) and on its right flank, you find the coolant temperature gauge and fuel gauge. Within the speedometer, you find a small digital display that displays exterior temperature, trip meter (odometer), and selected gear.

The center console has a six-speaker AM/FM/CD/MP3/WMA radio player, with a 7-inch display that also serves as a navigation system and a rear-view camera display. Below the radio, there is a small digital display that displays the fan speed, it is followed by large and easy to use climatic control buttons. Other features include a tilt-and-telescoping steering wheel, electric windows, rear privacy glass, air-conditioning, cruise control, and an auxiliary audio jack.

The RAV4 has an elegant exterior that is appealing and inviting. The RAV4 is versatile with smooth curves and edges that underline its elegance.

At the front, the RAV4 features large contoured headlights that blend well with its grille, with a body-colored bumper below them fitted with driving/fog lights that are placed on its edges and quite further back for their safety and look. At the rear, the rear the taillights have blended well with the back end. The side mirrors have the same color as the body which gives them a nice flow with the body lines. 17” alloy wheels are standard on the RAV4

The Dualis is in its second generation, and over its two generations, it has available with two engine choices as listed below.

The RAV4 is in its 5th generation and since the arrival of the first RAV4 in 1994 several engines have been used some are listed below.

Now more than ever the competition in the compact/midsize crossover car category is so tough, but the Dualis and the RAV4 remain two of the most sought after and appealing entries. After scouring through the details of these two in this comparison test we have arrived at a conclusion that they are almost even in all aspects. These two cars excel in areas that other compact crossovers do not, so if an easy-to-use and versatile car is what you are looking for, then these two will make an excellent choice.

ALL TOYOTA RAV4 FOR SALE