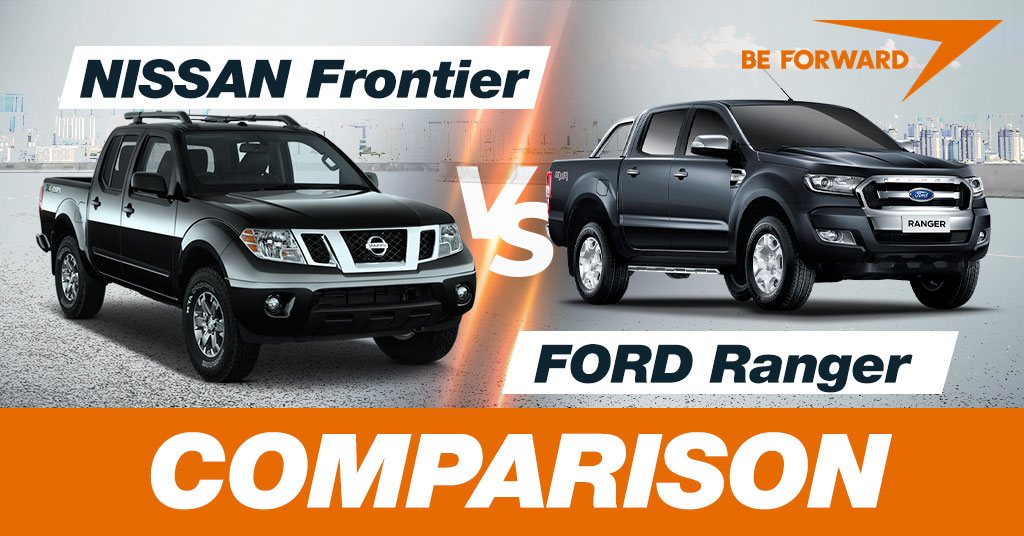 The Nissan Frontier and Ford Ranger are among the pickup trucks performing well in the market worldwide. But every person has their own taste in selecting the brand he wants due to some aspects and sometimes external, interior looking without leaving behind the performance and prices.

In this article, the information will help you to understand both models, Nissan Frontier and Ford Ranger in terms of performance, interior, exterior, engine capacity, and fuel consumption.

After passing through this article you will be in the position to select which brand you want depending on your lovely factors without forgetting the price. Both are pickup trucks but they differ in some aspects like performance, towing capacity, fuel consumption, and many more. So take the time to read this to the end and you will come up with which brand to buy: Nissan Frontier or Ford Ranger?

(*Prices are reflective of average BE FORWARD pricings as of February 2022.)

The Nissan Frontier exterior has a modern look style but a design that appeals to a masculine clientele.

The Frontier is a roomy car that can carry 5 adults but the back seats have limited space, but tall passengers and adults can drive in the back seat of Crew Cab models on short drives without feeling too limited. The front seats offer enough support and comfort.

In the front and second cabin, you will find several storage partitions that are useful for keeping items such as beverages, smartphones, handbags, and goggles. In the front row, there is a center box, door pockets, a glovebox, and 2 cup-holders. In the back row, there are front seat jacket pockets and door pockets.

The Nissan Frontier has sufficient cargo space at the back that can carry even bulky luggage for a family of 5.

Since 1982 the nameplate Ford Ranger has been used on multiple model lines of pickup trucks sold worldwide by Ford from the compact and mid-size pickup category. Some models that were developed by Mazda for sale outside the North American market also used the Ranger nameplate. The first Ford Ranger was based on the T6 platform introduced in 2011.

The new Ford Ranger has a modern, attractive, and tough look in the back; the tail lamps are embossed tailgate and LED tail Lamps. In front of Ranger, the bold new grille is flanking, and the C-Clamp shaped headlamps give next-gen Ranger that gives a unique Ford tough look.

The interior of the Ford Ranger has a rather dated cheap-looking interior, and it’s attractive and stingy on standard features. The Ford Ranger has enough comfortable seats. It’s also pretty family-friendly in its roomy SuperCrew configuration. The dashboard is well arranged and gives the driver and passenger an easy way to access different buttons on the dashboard.

The Ford Ranger seats offer flexibility in the cabin. Inside, the Ford Ranger can carry larger items and relax in the cabin in greater comfort. The front cabin seats are well positioned which gives an outstanding view of the road when driving. In the first cabin row, you will find spacious space for both passenger and driver to relax.

In both the driver and passenger cabin, there are storage compartments that are good for storing items such as handbags, goggles, smartphones, and beverages. In the front cabin, you will find door panel storage, 2 cup holders, a glovebox, and a center box. In the passenger cabin, you will find front-seat jacket storage and the door storage panel only.

The D41 Nissan Frontier is fitted with only single-engine choices, 3.8L VQ38DD V6 petrol engine producing a power output of 310 hp and the engine is linked to a 9-speed automatic. Also, the King Cab pickup is powered by either 2WD or 4WD in either S or SV trim but the 4WD is standard on the Pro-4X.

After passing through this review, you will have enough useful information regarding these two Nissan Frontier and Ford Ranger and the choice remains yours. You can select one of these brands by visiting BE FORWARD.