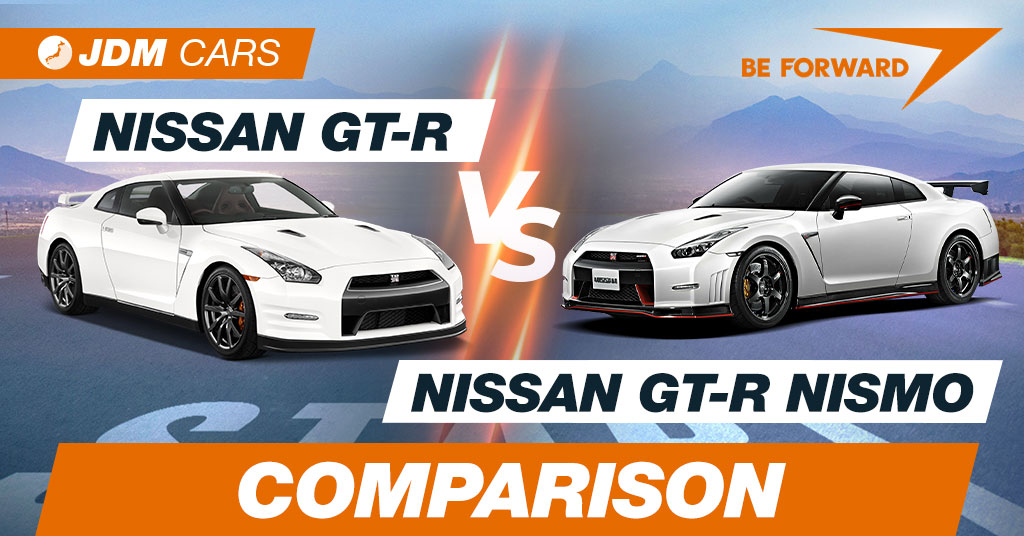 In the year 2007 Nissan officially unveiled the Nissan GT-R which went on to become one of the fastest production cars. The standard GT-Rs were so powerful that they amazed even the most exposed drivers. In late 2013 Nissan introduced the Nissan GT-R Nismo at the Tokyo Motor show which is even more amazing and unleashing a performance of the GT-R to a whole new level. In this article, we are going to compare the Nissan GT-R vs Nissan GT-R Nismo to shed some light on these two vehicles.

The GT-R is a 4-seat coupe, with front Recaro bucket seats, and two rear seats with leather upholstery. The steering wheel has a rake/reach adjustment which also moves the cockpit instrument cluster up and down. The interior is trimmed in leather and carbon fiber.

The GT-R comes with an 11-speaker Bose audio system with Bluetooth connectivity.

Atop the GT-Rs center console, there is a seven-inch multifunctional screen that displays the car’s technical information such as oil pressure, g-force gauge, lap timer, coolant temp, oil temp, cornering, and turbo boost pressure, but also functions as a reversing camera display. On the center console, there is a rotary knob next to the gear lever that can be used for controlling screen functions as well.

The GT-R is not short of storage space either; you get a glovebox, cup holders, door pockets, and a small boot.

The Nissan GT-R has aggressive front looks, with the V-motion grille, a long bonnet, pushed back Xenon (HID) headlights. The grille is designed in a way that allows enough air through which enhances cooling.

The bulgy rear-end is adorned with signature GT-R dual round LED rear lights, a rear diffuser, and the mega dual 5-inch exhausts. The GT-R is fitted with 20-inch RAYS forged alloy wheels.

The interior of the GT-R Nismo is so tranquil thanks to its acoustic windshield which reduces external noise. A large percentage of the interior is covered in leather with a few carbon fiber touches as well. The front sports Recaro bucket seats are designed with comfort, and enough legroom at the front, while at the rear, the seats are only suitable for kids. The centrally located 8-inch touch screen lets you access information and control your entertainment via a Bose premium audio system with two USB ports, Bluetooth hands-free calling, Apple CarPlay, and a rearview mirror. In addition to the screen’s touch functionality, it also has a Display Commander found just behind the gear shifter. This rotary-like dial can scroll through, toggle up and down, shift side-to-side, and rotate to control the infotainment system. Other features include a Nissan navigation system, and Nissan Connect services.

Storage-wise, you get a glove box, cup holders, door pockets, and medium-sized boot.

The Nissan GT-R came equipped with a twin-turbocharged, six-cylinder 3.8-liter DOHC VR38DETT engine that produces 545 horsepower and 463 lb-ft of torque.

The Nissan GT-R Nismo came with the same twin-turbocharged, six-cylinder 3.8-liter DOHC VR38DETT engine as the GT-R, but its engine received some performance upgrades such as an upgraded fuel pump, high-flow turbochargers, and optimized ignition timing. These changes helped the engine to achieve 600 HP and 481 lb-ft of torque.

Ever since the first GT-R hit the road, Nissan never looked back, and as a result, we ended up with the current GT-R and GT-R Nismo which are undoubtedly considered one of the all-time best cars to ever come out of the production line.

The Nissan GT-R Nismo is much more expensive than the normal GT-R. But, the GT-R enthusiasts and those who understand the significance of the added power, and performance upgrades that have been bestowed on the GT-R Nismo understand that the extra cost is worth it.

ALL NISSAN GT-R FOR SALE

ALL NISSAN GT-R NISMO FOR SALE