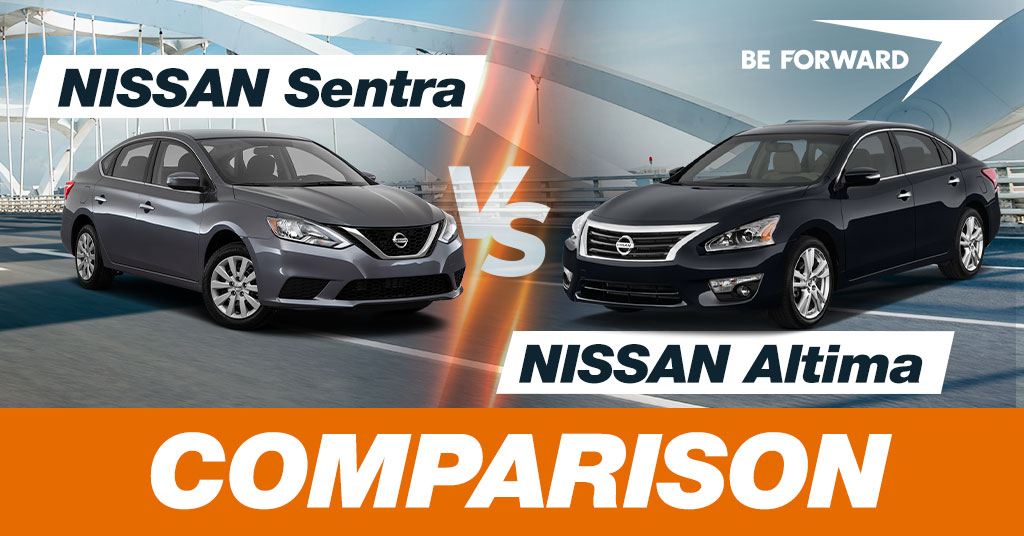 Nissan is a company known for its prowess in car manufacturing, and one area that they have perfected well is building sedans. Nissan’s sedans are multi-purpose vehicles that offer more luxury, power, and practicality. In the Nissan lineup, the Nissan Altima and Sentra prove this. Nissan Altima is so popular in some markets like South and North America the same as Sentra.

The Nissan Altima and the Sentra come equipped with several advanced features and in this article, we are going to take a brief look at the safety features, interior and exterior, engine capacity, and engine performance of these two Nissan products to see how they compare and constrast.

We hope this article will be insightful and help you the reader learn more about these two Nissan products. Please read on.

N.B: Prices are reflective of average BE FORWARD prices as of May 2022

The 2019 Sentra has a spacious cabin with a user-friendly infotainment system, but it is rated toward the bottom of the compact car class because it struggles to match the modern cabin styling and well-rounded performance of its rivals.

Inside the cabin, you will enjoy numerous storage facilities that are useful for keeping items such as handbags, beverages, goggles, smartphones, etc. In the 1st and 2nd row, you will have access to a center box, a glovebox, 2 cup-holders, and door pockets.

The cargo space of the Nissan Sentra is medium at the back that can carry much luggage for a family of more than 5. When extra space is needed you can’t add a space.

As a family sedan, the Altima is more than competent and has numerous strong qualities. It handles adroitly, it’s both spacious and comfortable, and it looks sharp. In the back seat, 3 adults can comfortably fit, and there is adequate legroom and headroom.

The 2019 Altima has 15.4 cubic feet of boot space, which is moderate for the level of its class. The wide boot opening makes it easy to load bulky items, but the boot hinges may impede cargo flexibility.

The 2019 Altima‘s exterior appearance has been upgraded with rectangular headlights and a taller grille. Along the sides, the Altima has character lines and is in the license plate area for an exciting new exterior look. The bumper area has been completely redesigned by Nissan, while at the rear new streamlined taillights were added.

The 2019 Nissan Sentra is the family member of an 8th generation and comes fitted with a 1.6L HR16DE I4, 2.0L MR20DE I4 gasoline engine, 1.2L HR12DE e-Power I3 (China) gasoline hybrid. These engines are attached to a 6-speed manual CVT Single-speed constant ratio (e-Power) while a hybrid drive terrain comes fitted with a Series hybrid (e-Power) and is powered by a 2 kWh Panasonic lithium-ion (e-Power) battery.

Nissan Altima proves that Nissan motors produced even luxury vehicles, powerful cars, and practical while offering good fuel economy. Nissan Sentra and Altima also offer safety and security features for the passengers and drivers but the Altima offers advanced safety features. Whether you choose the Nissan Altima or the Sentra you’ll certainly be treated with a variety of options beyond your expectation. To own one of these brands between Sentra and Altima please visit our online store at BE FORWARD.