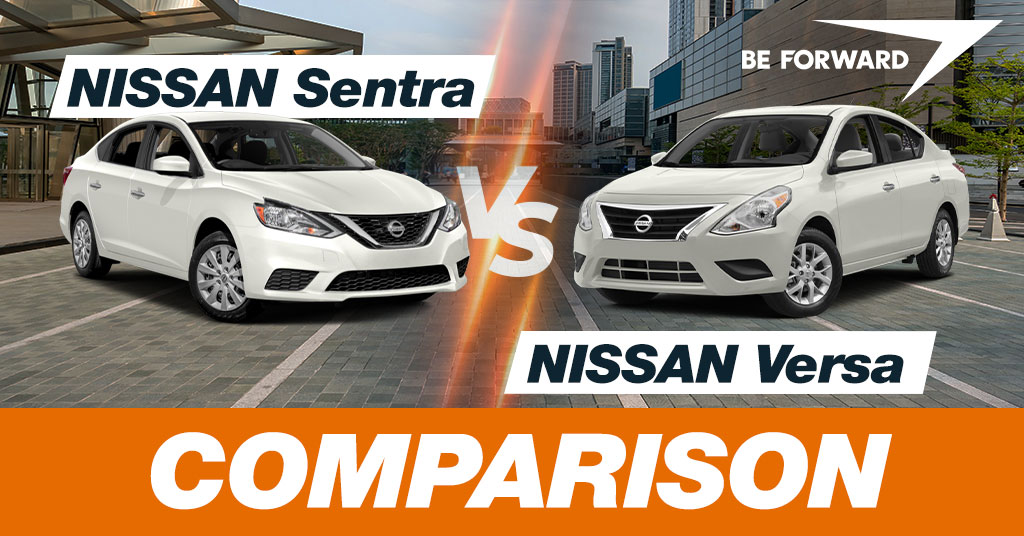 Nissan is one of the biggest and well-known car manufacturers around the world. The excellently made Nissan Sentra and Nissan Versa are in their lineup.

They produced some of the most popular and best-selling cars in the automotive market nowadays. Now, let us take a look at the Nissan Sentra vs Nissan Versa.

Both models have some advanced and astonishing features. Be it the handling, comfortability, appearance, performance, or power. And one cannot easily ignore the interior, exterior looking, and safety features when comparing the Nissan Sentra vs Nissan Versa.

N.B: Prices are reflective of average BE FORWARD pricing as of June 2022.

The 1st three generations of the Nissan Sentra were known as the Nissan Tsuru in Mexico, and until 2017 the B13 model was sold under that name, alongside the upgraded models badged as Sentra.

The 8th generation model Sentra is a spacious car that can accommodate 5 adults but the rear seats are somehow as large as the front. Due to the transmission tunnel at the center, tall passengers can’t seat properly enough. The seats at the front give enough support and comfort.

The cargo space of the Nissan Sentra is medium at the back and can carry a lot of luggage for a family of more than 5.

The Nissan Sentra‘s new model exterior has an eye-catching design that appeals to both a male and feminine clientele.

The Nissan Versa sedan is a fine vehicle with an attractive look. The Nissan Versa‘s cushy front seats and smooth ride make it a relaxing chariot for daily driving, and it’s available with more driver assistance compared to others.

The interior of the 2022 Nissan Versa no longer feels and looks like a children’s play area. It is installed with nice materials throughout and has soft-touch surfaces on the dashboard and doors. The fanciest model can be had with the leather-wrapped steering wheel as well as a heated front seat and shift knob.

The vehicle unlocks some desirable standard features, such as a digital screen in the gauge cluster, and a driver’s seat-mounted armrest while the upper trim Versa SR brings passive hands-free entry, remote start, automatic climate control, and more.

In the front cabin, you can enjoy 2 cup holders, a center box, a glove box, and door panel storage. The 2nd row can comfortably fit 2 adults and in the back seat, there is enough headroom and legroom. Also, the Versa has useful cubbies on its center console.

The cargo space can fit 6 carry-on suitcases in its trunk; 17 total with the back seat folded.

The 2022 Versa has a modern exterior appearance with a well-positioned front grille attached well to the front bumper and the bonnet.

The Nissan Sentra 8th generation (B18) is powered by a 1.6L HR16DE I4, 2.0L MR20DE I4 gasoline engine, and 1.2L HR12DE e-Power I3 gasoline hybrid (China). The engines are attached to a 6-speed manual CVT Single-speed constant ratio (e-Power) while a petrol hybrid engine is attached with an electric motor AC3 synchronous (e-Power).

The Nissan Versa comes fitted with a 1.6L DOHC 16-valve 4-cylinder engine that produces a 122-hp and is attached to a 5-speed manual which is the default transmission on base models, but on an upper trim, a continuously variable automatic transmission (CVT) is available.

The Versa is rated up to 13.6 km/l in the city and 17 km/l on the highway when equipped with the CVT. The base model Versa with the manual has significantly average figures, with an estimated 11 km/l city and 14.8 km/l highway.

Nissan models are not practical, powerful, and just economical but also offer security and safety for the passengers and drivers. Whatever model between Nissan Sentra and Nissan Versa you’re looking for, Nissan can certainly offer you beyond your expectation and a variety of options for you. So, why are you delaying it? To start your purchase, check our BE FORWARD store now.