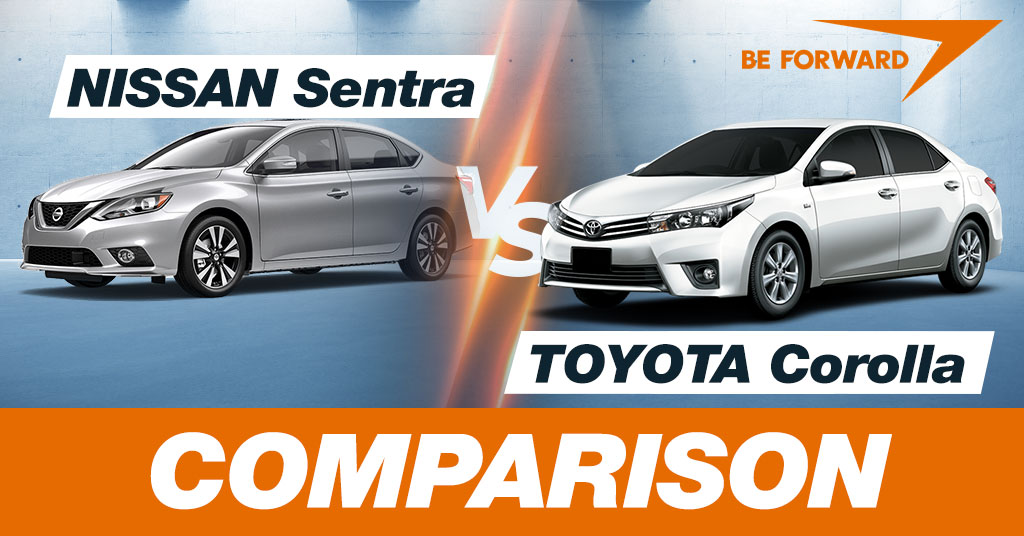 Nissan is one of the well-known and biggest vehicle manufacturers around the globe. The superbly made Nissan Patrol, Nissan Pathfinder, Nissan Rogue, Nissan Skyline, and now the Nissan Sentra and Toyota Corolla are one of the cars manufactured by Toyota which has a long history since its production began. Corolla is the best-selling car of its kind in the different markets. These are also the best fuel-efficient cars in the sedan group. The Corolla series brand took the market by storm but the Nissan Sentra did not at all. Both the vehicles have astonishing and advanced features. Be it the performance, power, handling, comfort, or appearance. And one cannot simply ignore the safety features, interior, and exterior look when comparing the Toyota Corolla model vs Nissan Sentra. This review is based on the latest generation of each brand.

N.B: Prices are reflective of average BE FORWARD pricing as of April 2022.

The Nissan Sentra is a series of vehicles manufactured by the Nissan Japanese automaker since 1982. Formerly subcompact in classification, for the model year 2000 it was reclassified as a compact car. Sentra was a rebadged export version of the Japanese Nissan Sunny until 2006, but Sentra is a rebadged export version of the Sylphy since the 2013 model year. In Japan, the Sentra nameplate is not used. In South America, the Sunny is sold as the Sentra in their versions. The first 3 generations of the Sentra were known as the Nissan Tsuru in Mexico, and until 2017 the B13 model was sold under that name, alongside the upgraded models badged as Sentra.

The latest model Nissan Sentra is a roomy car that can carry 5 adults, the back seats are somehow roomy as the front, but tall passengers can’t seat well enough due to the transmission tunnel at the center. The seats at the front offer enough comfort and support.

The Nissan Sentra has medium cargo space at the back that can carry much luggage for a family of more than 5. There isn’t room to add a space when extra space is needed.

The latest generation Nissan Sentra exterior has an eye-catching design that appeals to a feminine clientele.

The 12th generation Corolla E210 comes with a modern interior with a modern appearance and a well-arranged dashboard. The buttons on the wheel steering are well-positioned and offer accessibility to the driver.

Corolla E210 has a medium cargo space that can carry luggage for at least a family of 5 or less. When more space is required you can’t add space due to its body style.

The latest Corolla E210 has a modern and sporty appearance with well-positioned headlights attached well to the front bumper and bonnet.

Nissan Sentra is powered by a naturally aspirated, 2.0L MR20DE I4-cylinder gasoline engine, producing 149 hp and 198 Nm of torque, along with a standard Nissan X-Tronic CVT 8 (Continuously Variable Transmission). In the United States, no manual transmission option is offered however it is offered in Canada.

Three trim levels are available in the Nissan Sentra: S, SV, and SR. All versions are fitted by a naturally-aspirated Nissan MR 2.0L 4-cylinder gasoline engine linked to the X-Tronic CVT.

The hybrid drivetrain is a power-split (hybrid) that is attached to a battery of 1.3 kWh.

Depending on the year of manufacture, engine type, and trims, the Corolla E210’s fuel consumption is around 13.7 Km/L to 15.38 Km/L for petrol engine and the hybrid engine consumes 23.8 Km/L.

Nissan and Toyota have good sedan cars with power and comfort but Toyota has popular sedans such as Toyota Corolla, while Nissan has Nissan Sentra.

The Nissan Sentra and the Toyota Corolla are some of those sedan cars models that are limitless in almost every aspect of car details, but some of us choose the engine size, and disregard space and sometimes safety features. Both vehicles seem to have similar fuel consumption but Nissan Sentra has a big fuel tank capacity which offers long-distance without refill.

After passing through this review, now we hope you have a choice of which brand to buy regarding these 2 Nissan Sentra and Toyota Corolla. For people who look for the exterior appearance and a sport-looking Toyota, Corolla E210 is all you need. The Toyota Corolla‘s status speaks for itself, while the Nissan Sentra looks like a gentle car. You can buy one on BE FORWARD.