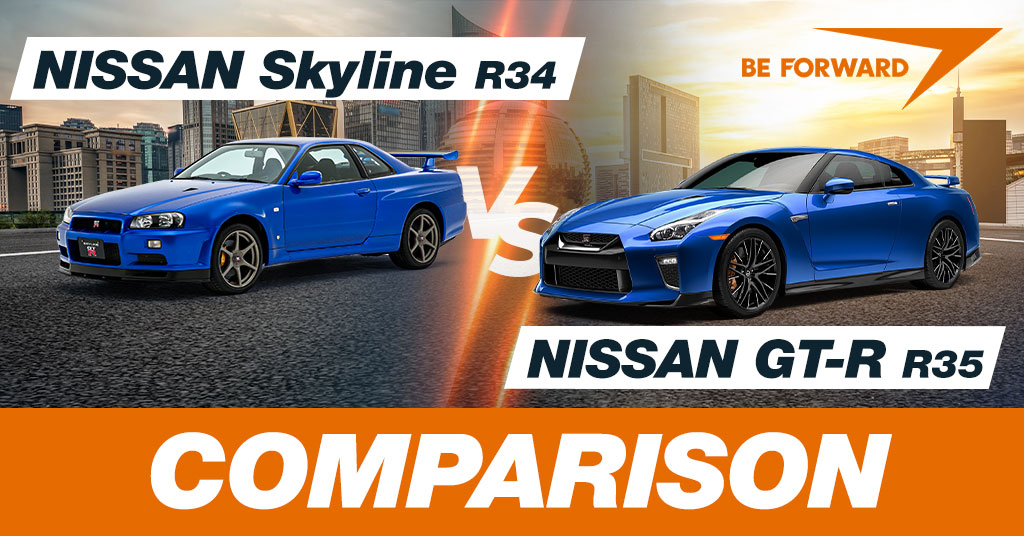 In 1957 Prince Motors (later Nissan Motor) unveiled the Prince Skyline, which later changed its name to Nissan Skyline. In 1969 a sports-based Skyline GT-R model was unveiled but was not very well received, which led Nissan to halt its production, only to revive it 16 years later. In 1989 the Skyline R32 was released and was very well received by car enthusiasts, but also won 4 Japanese touring car championships. This sequence continued, and later in 1999, Nissan released the 5th generation Skyline R32 which would also be the last Skyline with a GT-R badge. In 2007 Nissan released the Nissan GT-R (R35) as a model not related to the Skyline. In this article, we are going to compare the practicality, interior/exterior, and engines of the R34 and R35.

The R34 is a four-seater with a decent trunk that can accommodate up to 180-liters. The R34 GT-R is famous due to its performance and racing capabilities, but actually, it is also a car that can be quite useful for daily use. Its interior is simple but exquisitely designed, with its controls within reach and user-friendly. Even when cruising at about 120 km/h the cabin remains remarkably silent.

At the front, there are two comfortable bucket seats that swathe the driver like their own skin while offering perfect side support when cornering. The rear seat doesn’t offer much in terms of space, a young adult will be okay seating at the rear, but a full-size adult will struggle.

The center console features a 5.8-inch display that provides the necessary car information such as turbo boost pressure, throttle, injector, oil temperature, and water temperature. This information can later be downloaded after the ride. Beneath this display, you find the climate control buttons followed by a standard four-speaker audio system with a CD player. Other features include power windows, central locking, A/C, and a tilt-adjustable steering wheel.

The R34 GTR features a long hood, a flat windscreen, and a large air dam at the front making the car look aggressive to the onlookers. The clear, narrow, and slanted headlights with the front low-lying spoiler can’t go unnoticed, as they complete the front end of the car making it look like a samurai warrior.

The car comes fitted with 18-inch six-spoke alloys, 18-inch tires, with the recommended tires being the Bridgestone Potenza RE040 tires as they were specifically developed for this car.

At the rear, the R34 features an adjustable rear spoiler, with the V-Spec version having a carbon fiber underbody diffuser. These features make the R34 GT-R distinguishable while also aiding its high-speed stability.

The R34 Skyline GT-R comes fitted with one of the most sophisticated Brembo brake systems.

The R35’s interior is refined with leather finishing almost everywhere. The R35 comes in a 2+2 seat configuration, with two front bucket seats and another two seats at the rear all covered in leather.

At the top of the center console, you find a multifunctional display that provides car-related information such as cornering g-forces, oil temp, coolant temp, turbo boost pressure, etc.

This 8-inch display provides the kind of data that puzzles the tech-savvy. This display can also be controlled by a rotary knob just behind the gear lever.

Storage comes in the form of a glovebox, cup holders, and door pockets.

The GT-R R35 like the previous Skyline GT-Rs come with a conventional shape, with a long hood and its face almost flat. GT-Rs are designed to look aggressive, so are the R35s, it’s a true Godzilla. The R35 is angular and sharp, with Nissan’s V-Motion front grille that is designed to improve airflow.

The Skyline R34 comes fitted with the 6-cylinder twin-turbo 2.6-liter DOHC RB26DETT engine. The RB26DETT is a robust engine that comes with an aluminum cylinder head and a cast-iron block. The twin-turbo setup is fitted with two Garrett M24 turbochargers with internal wastegates with stock boost set at 10 PSI. The earlier RB26DETT’s factory power was rated at 280 HP and 260 lb-ft of torque, but when tested most cars rated at 334 HP.

Nissan kept on modifying and improving the reliability and robustness of this engine and eventually attained the quoted capability of 800 PS+ with modification support in place.

Of JDM engines, the RB26DETT has been a favorite engine for tuners for a very long time with 493 HP being easily achieved with the right supporting mods in place.

The R35 is fitted with the 6-cylinder twin-turbo 3.8-liter DOHC VR38DETT engine which was rated at 480 HP upon its release in 2007. But Nissan and the top tuners knew that the block has the potential of providing a much higher power figure. Nissan kept on upgrading the engine so as to achieve much higher power. In 2010, Nissan improved the engine intake by installing a larger bore exhaust, as a result, the output power increased to 530 HP. In 2011 the engine achieved a power output of 545 HP after Nissan tweaked the ECU, upgraded the fuel injectors, and installed a new blow-off valve. The stock boost was later raised to 13.5 PSI, followed by some other few tweaks that achieved an output power of 565 HP.

The VR38 is a capable engine, for those that are into tuning, then consider the VR38 and probably you can achieve much more than what Nismo achieved with regard to power on the VR38.

The GT-R is Nissan’s pride, it’s undoubtedly one of its most significant and successful projects, which has lasted for several decades.

With the RB26DETT and the VR38DETT engines being the incredible past and modern-day marvels, featuring some of the most impressive technology regardless of their astonishing price tags, you can easily see why so many people are craving to own one, but also keen on keeping the GT-R dream alive.

The R34 played its part as the GT-R torch bearer for years, and the R35 picked up from there to the present. These are surely great cars and owning one is most car enthusiast’s dream.

ALL NISSAN SKYLINE R34 FOR SALE

ALL NISSAN GTR-R35 FOR SALE