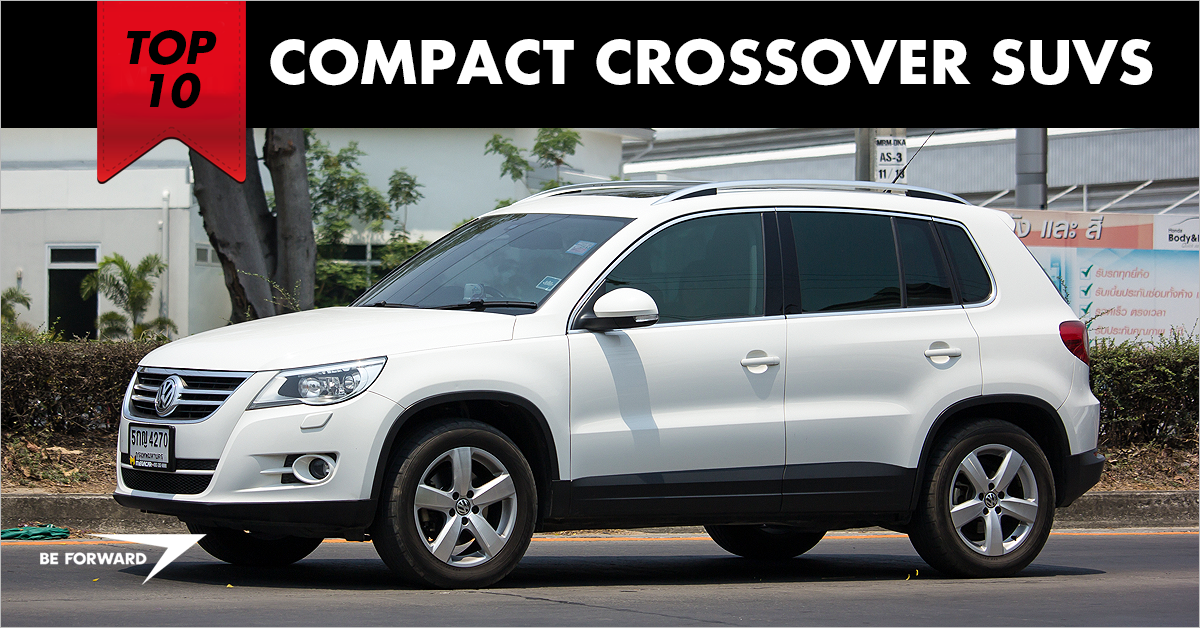 The compact crossover SUV is designed to seamlessly blend a traditional saloon with an SUV. The melding creates a mixture of daily utility and mild off-road capabilities, yet leaves drivers with the more refined driving experience of a car.

As an added bonus, they offer owners better fuel economy than the colossal truck-based SUVs that predate them. Automakers, ever responsive to buyer’s whims, have flooded the market with offerings; confusing potential buyers. To clear up some of the confusion, we have built this list of our top 10 compact crossover SUVs.

Looking for a quality compact crossover SUV? We will be reviewing what makes the following top 10 SUVs on this list stand out. Click below to learn more about each vehicle.

Despite those looks, it lands at number ten on our list. On the plus side, the Outlander Sport has a low base price and an extended manufacturers warranty. On the downside, the Outlander has not kept up with other vehicles in the segment. The powertrain, interior materials, and technology options fall far short of the competition.

A used Mitsubishi Outlander Sport SUV offers a friendly fuel consumption rate average of about 10.9km/L (based on 2010 Outlander models), and you can find a great conditioned model at BE FORWARD for prices ranging from $1,300 to $3,700.

Nissan excels in its ability to design noteworthy exteriors and finding rakish names to attract the interest of potential buyers. The Rogue (sold as the X-Trail, Quashqai, and the Renault Fluence in some markets) offers a responsive 2,488 cc I4 mated to a well designed CVT and can be had in either front or all-wheel drive. The Rogue offers a very comfortable ride and an easy-going suspension that insulates passengers from road idiosyncrasies and the interior is of superior quality.

The Rogue hits our list at number nine for a few reasons. The kindest thing that can be said is that the steering is numb. Some have called the steering uncommunicative, others say it will put a driver to sleep. The Rogue is also marketed as a seven passenger vehicle. They had all better be small people.

The Hyundai Tuscon features a roomy passenger area, well thought out controls, and a very satisfying suspension system. It is powered by one of two engines. The first is an efficient 164 bhp 1,980 cc I4. The second is a 1,598 cc turbocharged I4 that offers 175 bhp. Some markets can opt for a 2,398 cc I4.

The larger engine is paired to a six-speed automatic gearbox, while the turbo option is paired to a seven-speed dual-clutch automatic. There are two main reasons that the Tuscon hits our list at number eight: minimal cargo space and several large blind spots.

Depending on engine type and drivetrain, you can expect about 12.2km/L in fuel economy from a used Hyundai Tucson (based on 2009 model fuel consumption rates). Find a Hyundai Tucson from BE FORWARD for about $1,400 to $7,000.

Kia has been making huge inroads in most markets, shedding its image as an inexpensive option for budget-minded drivers. Today’s iteration of the Sportage combines a high level of functionality with engaging driving. The Sportage is available with a wide range of engine options that are highly dependent on your market. All are responsive and enthusiastic when the pedal is applied. Standard equipment is a six-speed automatic gearbox and front-wheel drive. A manual gearbox and all-wheel drive are available.

The Sportage effectively balances sport, style, and utility. The Sportage lands at the number seven spot on our list because of the lack of sophistication in the interior and its poor performance on broken pavement. If it can’t handle broken pavement, how can it handle anything off-road? Kia has been developing a refresh for the model, so the Sportage may move up the list in the near future.

A used Kia Sportage can offer you about 13.2km/L in fuel economy, depending on your drivetrain and engine type (based on 2011 fuel consumption rates).  Grab a great condition Kia Sportage from $1,700 to $7,800 at BE FORWARD.

The Subaru Outback (sold as the Legacy Outback in Japan) was refreshed for the 2015 model year. It became larger and and more roomy for passengers, but still defies classification. Is it a tall estate or a low-slung crossover SUV? Either way it can be powered by either a flat four or a flat six. Both offer ample power and are mated to a CVT. As always, all-wheel drive is standard on all units.

Despite its cult following and added clearance, the Outback still drives like an estate; causing it to land at number six. Lately, Subaru has been trying to shed the estate wagon qualities of the Outback, but efforts are half-hearted at best. On top of that, the engines are more suited to a car than an SUV. Honestly, Subaru should give up on the SUV transition and concentrate on what has been helping the Outback sell.

Depending on your desired drivetrain and engine type, a used Subaru Outback will afford you fuel economy ranging from 10km/L to 16.9km/L (based on 2010 fuel consumption rates). Used Subaru Outback prices range from between $160 to $5,300 at BE FORWARD.

Where the Outback falls a tad short as a true crossover SUV, the Forester does not. The Forester can be powered by a petrol or turbo-petrol flat four as well as diesel and turbodiesel flat fours. Horsepower ranges from 170 bhp to 260 bhp. A Lineartronic CVT is the standard gearbox, but a six-speed manual can be ordered.

The Forester offers a well-tuned suspension designed more for comfort than off-road capability, yet the Forester is very adept at tackling broken pavement or dirt roads; more so than the majority of the entries in the crossover SUV category. With so many excellent features, you may wonder why it has fallen to number five on our list. It is dull. It lacks interior refinement and its driving dynamics are dull, dull, dull.

Expect a used Subaru Forester to offer between 9.4km/L and 16.9km/L in fuel economy, depending on drivetrain and engine type (based on 2010 model fuel consumption rates). You can find a used Hyundai Santa Fe for between $550 and $3,800 from BE FORWARD.

To many car historians, the Toyota RAV4 was the first crossover SUV created. It has changed quite a bit since the first model. The current generation is less sport than utility, meant more for urban commuting than off-road adventures. Still, the standard 176 bhp engine mated to a six-speed automatic can make for a fun drive.

Add in optional all-wheel drive; low rear load floor; and an expansive cargo space and you have a useful all-weather ride. So, why is it sitting at number four? 176 ponies are good, but not quite what you will find in competitors. When you also consider its average braking performance, you can see that other models stand further out than the current RAV4.

A used Toyota RAV4 can provide impressive fuel economy, ranging from 13.3km/L to 17.5km/L depending on engine and drivetrain (based on 2010 fuel consumption rates). Find a great used Toyota RAV4 at BE FORWARD for between $2,000 and $8,300.

VW has been taking a lot of flak lately for its diesel testing fiasco, but it hits on all cylinders with the Tiguan. The Tiguan can be powered by any one of eight different engines depending on the market you are in. Each offers superb power and quick response to the pedal. Buyers can choose between the standard six-speed automatic, a six-speed manual, and a seven-speed dual stage clutch automatic (in select trim levels only).

Front-wheel drive is standard and all-wheel drive is an option. The handling, braking, and steering are impressive. Although we appear to be gushing about the Tiguan, there are three reasons that it has landed at number three: a cramped interior, an excessive price tag, and barely above average performance. All strong reasons to keep the Tiguan out of first place.

The Hyundai Santa Fe (sold as the Maxcruz and the Grand Santa Fe in some markets) is the little brother of the Hyundai Tucson. Capable of seating five and powered by seven engines that offer between 174 bhp and 264 bhp, the Santa Fe is the most popular model in the Hyundai line-up. The Santa Fe features either a six-speed automatic or a six-speed manual gearbox with standard front-wheel drive.

All-wheel drive is optional in all markets. New for this model year is an optional automatic liftgate operated at the key fob. The Sante Fe Sport offers near best-in-class handling, a nicely appointed interior, and solid all-around performance. It would be sitting at number one on our list if it didn’t have to compete with the Honda CR-V.

The Honda CR-V has been a leading crossover SUV since its inception. Honda has turned up the heat on every other automaker this year by making the exterior more stylish and modern while creating a quieter interior that is made from soft-touch materials. Not satisfied with simply improving the CR-V’s aesthetics, Honda revamped its handling with a re-tuned suspension and better brakes.

The CR-V is powered by a number of engines that are dependent on the market you are buying in, but the most exciting may be the new 2,356 cc that is capable of 189 bhp (in the Sport model. 185 in other models). As you would expect, the CR-V offers optional all-wheel drive. The CR-V provides a firm but comfortable ride, plush seats, and a well balanced feel from the steering. These features combine to put the Honda CR-V in first place on many lists around the globe.