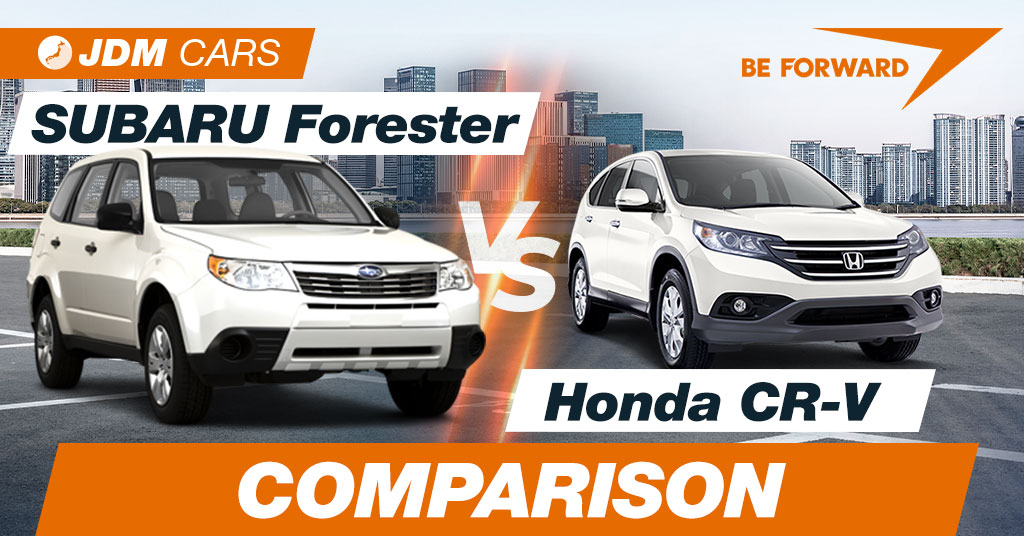 Crossover cars are a  blend of car comfort and SUV utility. For this reason, many buyers opt for a crossover rather than an SUV or Sedan these days as they offer the handling and fuel economy of a family sedan and SUV like comfort and practicality.

In this article, we will compare two great CUVs the Subaru Forester vs the Honda CR-V by looking at the interior, exterior, practicality, and engine in trying to shade some light and simplify your decision-making when it comes to these two.

The Forester’s cabin is straightforward, simple with a high driving position and great outward visibility. The interior is pleasantly finished, and the cabin looks elegant. The front seats are comfortable and supportive, while the rear seats are spacious and comfortable enough to even accommodate adults comfortably for road trips.

As standard, Forester’s come with a 6.5-inch (8.0-inch for high-end models) touchscreen infotainment system with Subaru’s state-of-the-art Starlink interface. Other features include a four-speaker stereo, HD Radio, satellite radio, two USB ports at the front seat; two more (optional) on the back of the center console for rear passengers, Apple CarPlay, Android Auto capability, Bluetooth, and onboard Wi-Fi.

The Forester is boxy and angular, with a vertical grille and LED headlights that run into its fenders. From the side, there are tall windows for great outward visibility and an airy and bright interior. At the rear, the Forester has an extra-wide tailgate with nicely designed taillights.

The CR-V has five-door and seats five people in two rows. It has a spacious interior that provides enough head and legroom across the board. The CR-V’s physical controls are in close proximity and are easy to use. The CR-V has 5-inch standard touchscreen infotainment with a USB port, Bluetooth connectivity, and a four-speaker stereo. The high-end model’s infotainment feature a 7-inch touchscreen, Android Auto, Apple CarPlay, extra USB charging ports, HD Radio, satellite radio, and a six (eight or nine) speaker stereo and a navigation system.

Available storage facilities on the CR-V include a glovebox, door pockets with bottle holders, cup holders, and front-seat jacket pockets. The CR-V has an 1110-liter boot with rear seats in place which extends to 2146-liters with the rear seats folded. The 2019 CR-V has an enormous cargo hold in contrast to compact SUV standards.

At the front, the CR-V has a nice chrome grille that sits high above with neatly designed LED headlights on its sides. Standing from the side, the CR-V features a nice chrome character line that runs to the rearmost roof pillar. The taillights barge with a chrome strip on the tailgate. The CR-V comes fitted with its standard 17-inch alloy wheels. Higher trims come fitted with 18-inch and privacy glass for a more upmarket look.

The CR-V was rated a Top Safety Pick for 2019 by the IIHS and an overall safety rating of five out of five stars by the NHTSA. Along with that, it also features the most up-to-date driver-assistance technology as standard. Key safety features include, lane-departure warning and lane-keeping assist, blind-spot monitor and rear cross-traffic alert, and automated emergency braking.

The Subaru Forester has utilized several flat-four (boxer) engines since its inception as seen below.

The Honda CR-V has utilized several engines in its entirety, below we take a look at some of the engines.

There is a very thin line that separates these two great crossovers. You can never go wrong with either the Subaru Forester or the Honda CR-V. These two models are great examples of how modern and practical compact SUVs are. These two cars offer great engines with enough power and efficiency. These two cars are well-rounded with lots of good attributes, enough to make a purchase of any of the two a great buy. Please visit BE FORWARD  and choose from our large list your next car.

One thought on “Subaru Forester vs Honda CR-V Comparison”