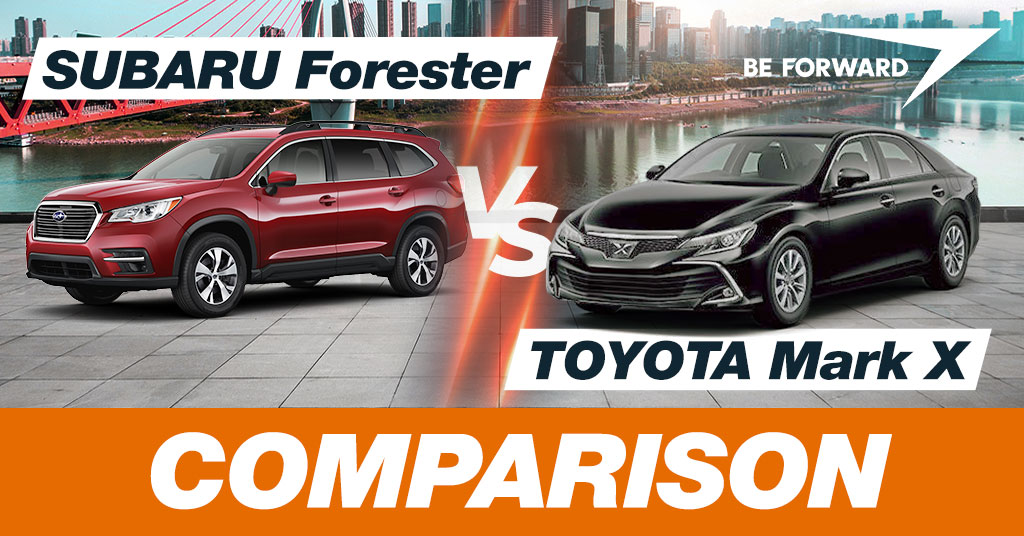 In 1997 Subaru (former Fuji Heavy Industries) released the Subaru Forester compact crossover to capture a share in the compact SUV market, and since then the Forester has been making strides and gaining young and old fans all over the world. On the other side, Toyota released the Toyota Mark X mid-size sedan in 2004 to capture the market segment of mid-size cars. Today we are going to take a look at these two great cars and see how they compare against each other in trying to help you make that car buying decision. We will focus on their interior, exterior, engine, fuel consumption, and practicality.

Subaru has been improving Forester’s interior with every new release. The most recent Forester has plenty to offer in its interior, with the 2019 Subaru Forester regarded as one of the best compact SUVs for families. The Forester has an excellent combination of cargo and passenger space, the rear passengers have the best legroom, shoulder room, knee room, and foot room in this category.

The Forester has some nice, fine, and modern cabin materials and features like the 7-inch touch screen, a Wi-Fi hot spot, Android Auto and Apple CarPlay.

The driver has a high driving position with lots of elbow room and a dashboard placed far enough to create a spacious interior feel. The Forester’s upright shape with a low window line allows for great outward visibility and enough light into the cabin making it feel airy too. The Foresters boot is so generous, with 974-liters of boot space that extends to 2115-liters with rear seats folded.

Subaru also worked on reducing cabin noise by enhancing sound deadening features that made the cabin much quieter.

The Forester’s body design has not changed much over the years, as Subaru has restrained, the old-school handsome design is a throwback but other exterior parts keep evolving such as the introduction of automatic projector headlights, rear LED taillights and a hood with character lines at the center and on the sides.

The Mark X is an elegantly designed car with a nice and neatly finished cabin. The Mark X borrowed a leaf from the Lexus GS and as a result, it gained that touch of class that usually accompanies Lexus GS. With a width of about 1775 mm to 1795 mm, a length of about 4730 mm to 4770 mm, and a wheelbase of 2850 mm, the Mark X is accorded with a spacious interior with excellent legroom and feet room for all the front and rear passengers, except the passenger occupying the middle rear seat who is affected by the transmission tunnel.

The Mark X comes with body-hugging seats at the front and a bench at the rear covered with either leather or cloth upholstery. The driver is treated to a comfortable high seating position with excellent forward visibility, and the presence of the powerful dual-zone auto air condition is highly appreciated especially for those who reside in the tropics as it will be very useful in the summer.

The dashboard is well arranged with straightforward and easily accessible dials and buttons on the center console just below the multifunctional digital display.

The Mark X has about enough storage for its passengers, with a storage tray under the control dials, just in front of the gear which can handle phones and other small things, front and rear door pockets for handling magazines or other things, a glove box, a deep central bin between the front seats, bottle and cup holders, storage compartment under the instrument panel, front seat jacket pockets and a 480-liters boot. Other interior options include alloy pedals and assortments of carbon fiber accents.

The Mark X’s style is unique, the front fascia gives the car an aggressive look with a grille that is adorned with a large or small “X” with LED-infused headlights on its sides. The fenders are bulgy and wraparound taillights at the rear. As Standard, it comes fitted with steel rims with caps while the high-end comes fitted with alloy rims.

Another great safety technology on the Mark X is the Intelligent Adaptive Front-lighting System which shifts the low beams to match the steering angle and vehicle speed when cornering with the headlights on, thereby enhancing visibility in the direction when the vehicle is moving.

The Subaru Forester is on its fifth generation now. What an achievement! And in this time it has won the hearts of car enthusiasts, managing to accomplish that not by looks, but rather by its performance. We are going to take a look at what has been fitted under the hood of the Forester in these 5 generations.

The 1st generation Forester came fitted with one of the engines listed below.

These engines transmitted power to the wheels via a 5-speed manual transmission as standard and an optional 4-speed automatic transmission.

The 2nd generation Forester came fitted with one of the variants of the  EJ25 engine as listed below.

The 3rd generation Forester came fitted with one of the engines listed below.

The 4th generation Forester came fitted with one of the engines listed below.

These engines transferred power to the wheels via 4-speed automatic CVT and a 6-speed manual transmission.

The 5th generation Forester came fitted with one of the engines listed below.

These engines transmitted power to the wheels via a six-speed manual or a CVT transmission.

The Toyota Mark X lasted for two generations from 2004 to 2019. In its two generations, the Mark X had a great following that is a result of looks and what lies under the hood.

In its two generations, the Mark X was fitted mainly with engines, the 2.5-liter 4GR-FSE and the 3.5-liter 2GR-FSE, with the 3.5-liter 3GR-FSE appearing on some models. Although these two engines were used in a period spanning 15 years, almost every release was tuned or upgraded.

These engines transfer power to the wheels via a 5-speed or 6-speed automatic and a 6-speed (GRMN) manual transmission.

The Forester is a compact crossover SUV while the Toyota Mark X is a mid-size sedan. These two cars were built for different purposes and functionalities. The Forester has a better ground clearance than the Mark X, but it also has some offroad capabilities that the Mark X can only dream of. The Mark X on the other side is a very low, posh, and urban ride that can take you places while offering you that taste of luxury. So before buying one of these two rides, you must first consider the purpose and nature of your activities to make the right choice on which of these two will suit you best.

ALL TOYOTA MARK X FOR SALE