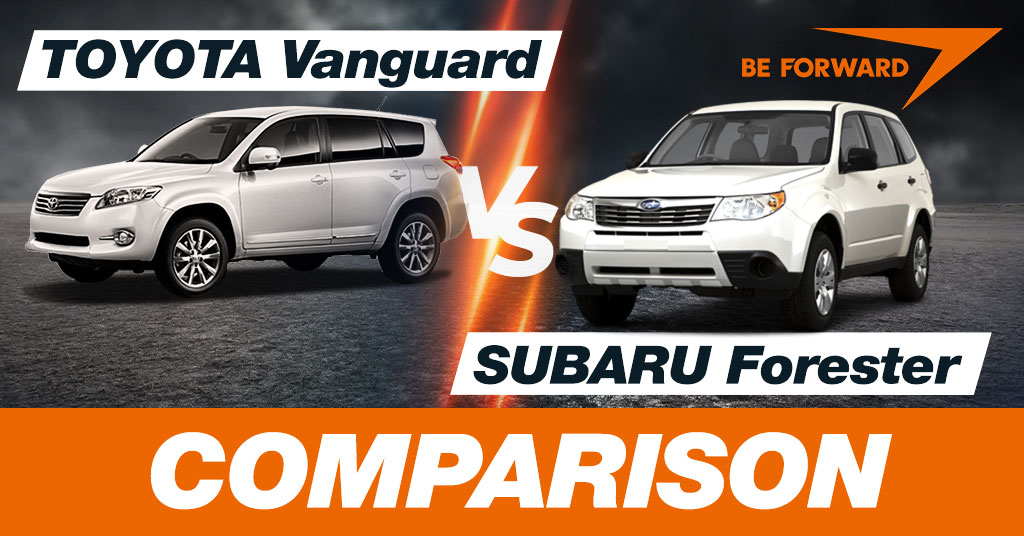 Subaru, a company known for its championships in rallies and its early mass production of cars with AWD forayed into the growing and lucrative compact crossover SUV market in 1997 by releasing the Subaru Forester, following in the footsteps of Toyota RAV released in 1994. In this article, we are going to compare the Subaru Forester and Toyota Vanguard which is the RAV4’s identical but slightly larger sibling. We will take a look at the interior, exterior, under the hood, and safety.

The Forester has a spacious cabin with five seats in two rows. The front and rear passengers are afforded lots of space with great leg, foot, and knee room for all passengers. The Forester has large windows that create an open and airy feel while offering the driver and passengers excellent outward visibility. The standard Forester comes with cloth upholstery and a manually-adjustable driver’s seat, while the higher trims come with rear reclining seats, a power-adjustable driver’s seat, heated front seats, and leather upholstery.

The Subaru Forester offers 974-liters of cargo space with rear seats in use and 2106-liters with the rear seats down. The Forester has other storage compartments for small items such as the glove box, door pockets, cup holders, and front-seat pockets.

On the outside, the Forester features a crisply designed winged grille and headlights that stretch outwards with smoothly curved sheet metal on the sides that run into the pinched taillamps at the rear. The exterior also features a toned-down beltline that begins behind the front fenders and eases nearly into the rear lamps.

The Vanguard has an exterior layout and roofline that is in line with modern crossover designs, with some cues that resemble the rugged SUV designs of yesteryears. The front end features a styled chrome grille, front bumper, contoured headlights, and fog lights.

The safety of occupants in the Vanguard was well-considered, as it comes equipped with several modern safety features and technologies as standard. The features include front-seat-mounted side airbags for driver and front passenger, first and second-row roll-sensing side curtain airbags, ESC, and ABS. Other Vanguard models come with Toyota’s Vehicle Stability Control (VSC) system which incorporates AWD, stability and traction control and electric power steering.

The Subaru Forester has been around since 1997, and it is still here. What an achievement! The engines have evolved over the years. Below are some of the engines that were fitted on Forester releases.

Power to the wheels is transferred via a 5-speed manual transmission or 4-speed automatic transmission.

Power to the wheels is transferred via a 4-speed automatic CVT or a 6-speed manual transmission.

Power to the wheels is transferred via a six-speed manual or a CVT transmission.

The Vanguard features only two engines, one fitted on the 240S, and the other on the 350S. Below is a brief detail of the two engines.

Subaru has maintained Forester’s exterior looks with little change but managed to keep it on track. The Forester is not about style, but rather ability and sensibility, and the Vanguard is not far from that but comes with that extra third row with two seats which is so useful for those commuting in numbers.

The Vanguard’s ancestor, the 1994 Toyota RAV4 was the first compact SUV to combine a car-like driving experience with the looks of an off-roader. From the beginning, Toyota knew that these cars will likely be spending much more time on-road than off-road, so the Subaru Forester and the Toyota Vanguard were developed with that mentality as well.

The Forester and Vanguard have grown considerably and evolved compared to previous models, they offer lots of interior space and cargo capacity enough for an average family although there have been tradeoffs. Car enthusiasts might find these tradeoffs disappointing, but families and the environment will welcome the evolution.