Skip to content
TOP  >  Car Comparison  >  SUV vs Sedan - Which is Right for You? 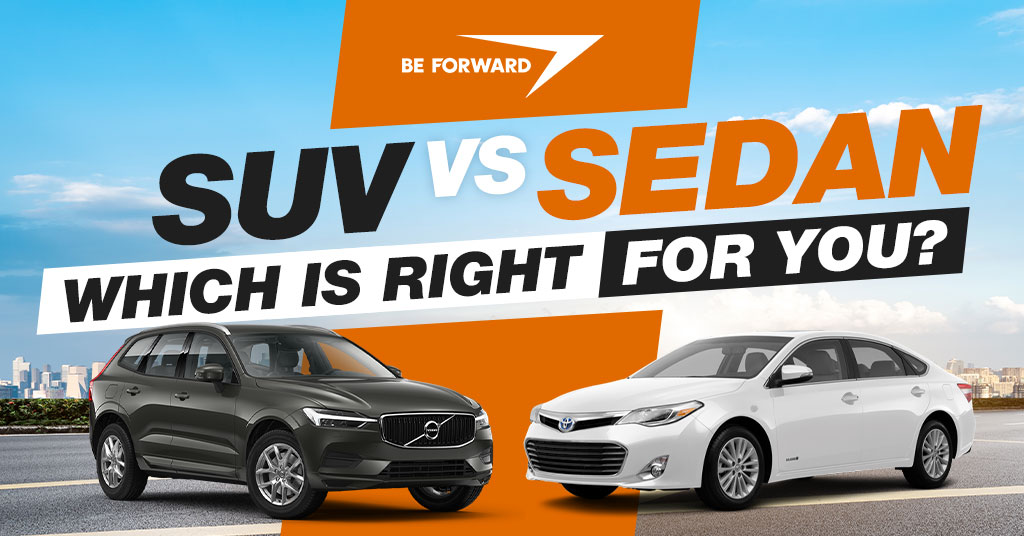 Introduction
Choosing the right car requires a bit more consideration especially when you are thinking about the body style of the car. After all, cars are not just a mode of transport to others, it is quite expensive and can be used for other purposes like business, personal use, family use, or a status symbol in society to some. Now, let me introduce the two most popular cars these days, the SUV and sedan. Both cars are known for each of their qualities and features and have also shown some similarities but what are their differences? Is the SUV a better choice? With more space not just for yourself but for more people and cargo. Or is the sedan the right choice? It is easy to handle and less expensive than others.

In this article, we will get to know more about the difference between SUV and sedan and try to find what’s the right car for you.

The Differences Between SUV And Sedan

The SUV has a five-door layout and is known for its big cabin and trunk space that can carry more passengers and cargo. It also can be driven in any harsh weather conditions and has off-road abilities with towing capability as well as a great number of engine options for buyers. The SUV has a sporty-looking design which makes it more appealing to some enthusiasts and offers better visibility due to its higher ground clearance.

The traditional sedan has a four doors layout with three compartments: the engine area, cabin area, and trunk space. The sedan has a balanced look with its long body, shorter doors, and windows as well as prioritizes the comfortability and convenience of the with enough headroom and legroom. Added its fuel efficiency which is much better than the SUV and it is easy to handle due to its light weight.

Top 3 SUVs in BE FORWARD

Toyota Harrier is a compact mid-size crossover SUV which was first introduced in December 1997 with 4720–4770 mm length, 1690 mm height, and 1835 mm width. It is available in a five-door and front-wheel-drive / four-wheel drivetrain and powered by a Super CVT-i with a 2.0L 3ZR-FAE straight 4 petrol engine producing 149 hp, and a 2.5L 2AR-FXE straight 4 hybrid engine producing 150 hp with an eCVT gearbox.

Subaru Forester is a five-door compact SUV with a 2640 mm wheelbase and an all-wheel drivetrain which was first introduced in 1997 by Subaru. It is available for five generations and powered by a 2.5L FB25 H4 petrol engine with 170 hp, 2.0L FA20F H4 petrol engine with 250 hp, and 2.0L H4 turbo-diesel engine with 276 hp paired either with a six-speed manual or Lineartronic CVT gearbox.

Toyota Prius is the world’s first mass-produced gasoline-electric hybrid car marketed as a four-door sedan and available in front-engine, front-wheel-drive drivetrain. It was first released in 1997 with two models: the NHW10 for the Japanese market and the NHW11 which was introduced in the global market. The two models offer a 2550 mm wheelbase with a large cabin and are equipped with a 1.5L 1NZ-FXE DOHC straight-4 petrol engine for the NHW10 with a 288V Electric motor and a 1.5L 1NZ-FXE DOHC straight-4 VVT-i petrol engine (58 hp) with 273.6V Electric motor (44 hp) for the NHW11.

SUVs and sedans are both cars fit for personal or family use with great reliability, impressive advanced features, outstanding fuel efficiency, numerous engine options, and great practicality. They both offer great qualities so choosing the right car for you all depends on your preferences, lifestyle, and on how much you can spend. The SUV offers large space for people and cargo, towing abilities, and can be driven on and off-road or in any kind of weather. While the sedan has a much better fuel economy, better drivability, and is more affordable than the SUV. Whichever car you choose will depend on what you need and want, so choose wisely.