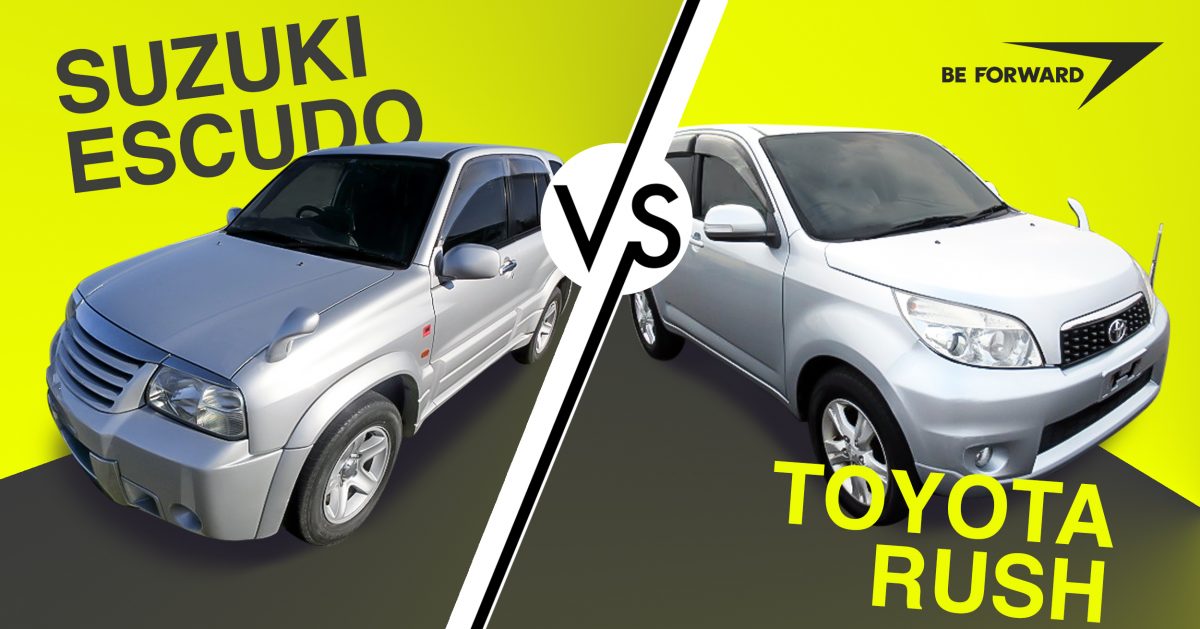 Are you in the market for a solid and adaptable used SUV that can handle the harsh road conditions of Africa’s countryside? You’re not alone! Take a closer look at the Suzuki Vitara/Escudo and Toyota Rush, two popular Japanese SUV models, to see how their features measure up against each other in this used car comparison.

Before we go line-by-line to find out whether the Suzuki Vitara/Escudo or Toyota Rush is best matched for your needs, let’s take a quick look at some key comparisons and differences between the two.

The Suzuki Escudo, also known outside of Japan as the Vitara (or Grand Vitara for its second and third generations), was first introduced to the Japanese auto market in July 1988. The car model has since undergone various modifications and refurbishments across its lifespan. For instance, in the second quarter of 2012, Suzuki gave the Escudo’s design a face-lift with new wheels, new grille, and fog lights.

The Toyota Rush first entered production in 2006, after a collaborative partnership between Toyota and Daihatsu was established to manufacture the model. The car is known to be monocoque, which means its body design is built to support the car’s body weight through an external frame.

A used Suzuki Escudo costs around $2,700–$4,300 on BE FORWARD. It has a 2.0 liter-engine with in-line 4 cylinders, or a V6 2.7-liter gasoline powered engine with a variable induction system. It has two transmission choices; 5-speed manual or 4-speed automatic, and its suspension and 4-wheel drive train give owners a comfortable driving experience on most roads and highways.

A typical used Toyota Rush costs around $2,700–$7,500 on BE FORWARD. The car is equipped with power steering, five doors, seating for five, and operates on an automatic transmission. It has an engine displacement of 1495cc, and produces 108 horsepower at 6000 rpm.

The Rush can deliver a torque of up to 141nM at 4400 rpm, and is powered by a five-speed manual gearbox transmission that employs a four-speed automatic, well-designed gate shifter gearbox. It comes with a 5.2-meter turning radius and a large 50-liter fuel tank capacity.

Both vehicles are offered with a similar price tag for their cheapest used variants, however the Suzuki Escudo also has a number of models available at a higher price in comparison with the Toyota Rush. Despite this, both are competitively priced in relation to their features within the used car market.

From aesthetics to functionality, let’s look at how the Escudo/Vitara and Rush compare with each other.

The Suzuki Vitara/Escudo’s interior is designed to give a luxurious impression. Made with high-quality materials that cover the whole of the SUV, its manifold cluster is covered with aluminum and it offers an ample amount of luggage space, particularly when the seats are folded. The interior is fitted with an automatic climate control system, keyless entry, MP3 and CD player, disc changer, speed-sensitive volume control, and cruise control.

To ensure the safety of its passengers, the Escudo/Vitara is fitted with airbags and built-in stability control, along with traction control devices, side curtains, and anti-lock disc brakes. The car’s exterior is designed with smooth, attractive lines and a bonnet that leads to a polished chrome grill enclosed between its bright headlights. It is also fitted with alloy wheels, with most models offering an additional sunroof.

The Toyota Rush’s interior is designed for optimum passenger comfort. It offers dual air conditioning, an immobilizer, and a DIN head unit with CD and MP3 player. The car is also equipped with a tuner, six speakers, and a pillar antenna.

The Rush is equipped with a first aid kit, SRS airbags, and a safety triangle, and also provides spacious seating that accommodates for passenger legs and luggage comfortably. Its exterior is treated with an anti-rust coating and complemented with a door visor, 16-inch alloy wheels, front rear spoilers, and side skirting for a sportier look along with its rear bumper protector.

The Suzuki Escudo has a naturally aspirated engine type with 4 straight cylinders. It also has an engine capacity of 2.4 liters, that gives a displacement of around 2393cc. The car gives a maximum torque of 225 NM per 4000 rpm and produces 164 horsepower at 4000rpm.

The Toyota Rush has been equipped with a VVT-I engine that enables it to provide a mileage of around 17–18 km per liter, with an impressive top speed. It has an engine displacement of 1495cc and 108 horsepower at 6000 rpm, with an average torque of 141 nm.

The Rush’s fuel tank has a 50-liter capacity, and fuel economy of 14km per liter in normal traffic, with the main fuel type being petrol.

When comparing the overall fuel efficiency of both vehicles, the Toyota Rush comes out as slightly more fuel efficient than the Suzuki Vitara/Escudo.

The Suzuki Escudo provides more horsepower than the Toyota Rush, thanks to the former’s powerful engine. In addition, the Escudo’s flexible controls and handling mean you can tackle a variety of different road conditions with more confidence than with a Toyota Rush.

The Toyota Rush offers a fair amount of noise insulation, making it relatively quiet to drive. Its tires offer a fair amount of traction, however its softer suspension can cause the body to bounce and roll quite easily. This works well when driving over potholes and bumps, but needs to be taken into consideration when maneuvering around tighter bends and curves.

Suzuki Vitara/Escudo vs Toyota Rush: Which is Better?

If you’re shopping for an SUV with horsepower and torque, Suzuki’s Escudo may be the better choice. On the other hand, for drivers more concerned about fuel economy, the Toyota Rush is a sure choice between the two vehicles.

No matter what you may be looking for from your next SUV, both the Suzuki Escudo and the Toyota Rush are well-suited for tackling Africa’s road conditions and are great options to consider for your next car. BE FORWARD also carries the Escudo under its international “Vitara” label, which can be found here.