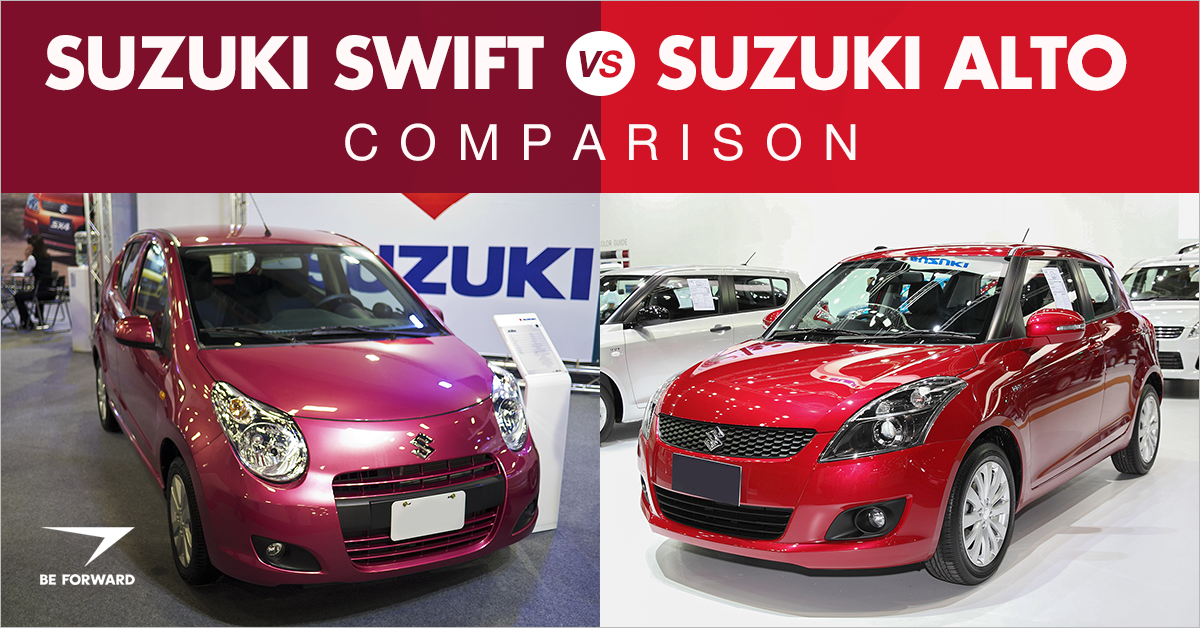 The Suzuki Swift and Suzuki Alto are both common hatchbacks in many parts of the world including Europe, Asia, and Africa. These cars have one thing in common in that they are both small hatchbacks made by Suzuki. However, the similarities end there.

While the Swift looks broader, more compact and nicely styled with a large grill, the Alto is narrower and more rudimentary in structure. Both are great urban family hatchbacks, and since they have very economical fuel consumption, you can be sure the running costs are low. But what are the features that set them apart? Let’s take a closer look at both of these popular Suzuki hatchbacks to get a better idea, in this used Suzuki Swift and Suzuki Alto used car review.

Before we go into detail about what makes two of Suzuki’s best compact vehicles so great, here’s a quick look at key elements we will be analyzing down below.

Now in its 4th generation (2017 to present), the Suzuki Swift has undergone many changes over its generations since its introduction in 2000. It was first produced to replace the Supermini Cultus, coming in either 1.3-liter or 1.5-liter engines with 5-speed manual or 4-speed automatic transmissions.

Compared to the Swift, the Suzuki Alto has been around much longer, with the 1st generation having been in the market from 1979 to 1984 until its current 8th generation (2014 to present). In Japan, the Alto is categorized as a ‘kei car’ (a small personal car) and it therefore looks more like this style of car than the Swift.

Both vehicles have a lot more happening on the inside than meets the eye. Let’s take a look at the differences between the Swift and Alto.

The Swift is considered to be a subcompact hatchback, which comes in different styles including a 4-door sedan, 5-door hatchback, a 2-door convertible as well as a 3-door hatchback, similar to the Mini Cooper from the UK.

The interior is large enough for four passengers, there is good cabin space and enough room for tall passengers to sit with comfort. For families traveling with luggage, there is a comfortable 268 liters of boot space in the later models.

One thing that you may notice about the interior of the Alto is that its dashboard and cabin have an overall appealing look. The instrument panel is nicely positioned and is easy for the driver to reach.

The windows are electric, and there is manual air conditioning, but the cabin storage is a bit more minimal than the Swift as the Alto has smaller door pockets, and no glove compartment. It is designed to seat 4 passengers and the boot space is 129 liters to 177 liters.

From design to functionality, the exterior of the Suzuki Swift and Alto differs a bit. Let’s see how that difference can affect your buying decision.

To some, looks are everything when it comes to their car and the Swift does not disappoint in design. The most common features include the sleek grill, slanted roof, LED headlights and backlights and it mostly comes with alloy wheels.

All of these features make it quite visually appealing. As a five-door hatchback, it is a common model for families thanks to its good boot space and low ground clearance.

On the exterior of the Alto, you will see its stylish headlights, and a slightly boxier look to it compared to the Swift. It also features a tighter, rounder look around the wheels that emphasises the sense of this car being small and compact.

It is a compact-sized car and it looks like one whether you view it from the inside or the outside. It is also available in many different colors to suit different tastes.

Both the Suzuki Alto and Swift offer amazing fuel economy, but their engine performance differs based on your needs and application.

As mentioned earlier, the Swift comes with larger engine sizes than the Alto, with the majority featuring 1.3-liter engines and some models with 1.5-liter engines. This means the fuel consumption is also higher, but then it can handle slightly more difficult terrain faster than the Alto.

Earlier models of the Swift also came with smaller 1.0-liter and 1.2-liter engines, which are mated to either a 5-speed manual or 4-speed automatic gearbox and 2-wheel or 4WD drivetrain. The Suzuki Swift’s fuel consumption starts at around 27.9km/l (but could be higher for models with bigger engines), with the fuel tank size being 42 litres.

The Alto is mostly available in a 68bhp, 3-cylinder 1.0-liter engine. This is not a very powerful engine, but then the Alto is not designed for power or long-distance drives. It is much better suited to running urban errands or as a small family car.

Its fuel consumption averages at roughly 21.5 km/l for the manual transmission and 20.0km/l for the automatic transmission. with a fuel capacity of 35 liters for both types.

Suzuki Swift vs. Suzuki Alto: Which is Best for You?

Both of these cars are incredibly economical when it comes to fuel consumption and the buying price for used models, however there are some slight differences that may make one a better choice over the other.

The Swift offers a variety of trims, a larger amount of boot space, and a more attractive interior. This hatchback is recommended for young people who love a balance of style and performance at an affordable cost or for young families with one or two kids.

The Suzuki Alto is more compact, has a slightly boxier exterior, and offers a smaller engine compared to the Suzuki Swift. If you are looking for a small car that is easy to zip around in or to use as a taxi for your local business, the Alto is also a great choice.

BE FORWARD: Your Source for High-Quality, Low-Cost Used Hatchbacks & More

Looking for even more used hatchback cars to consider for your next purchase? BE FORWARD offer hundreds of hatchback vehicles in stock, which is updated daily. Click or tap the button below to browse the current selection on offer!