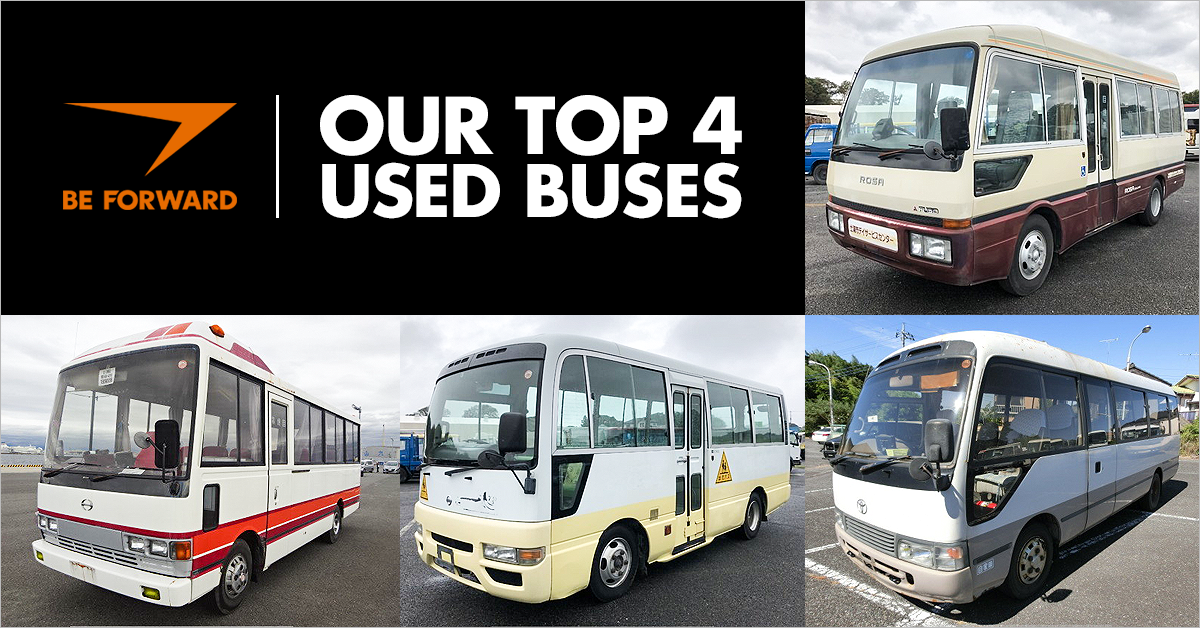 The Toyota Coaster, Mitsubishi Rosa, Nissan Civilian, and Hino Rainbow are 4 of the most popular buses to help you kick-start your passenger transport business. Whatever you pick, all are easy to maintain and have admirable fuel economy. The wide availability of spare parts also endears these Japanese secondhand buses to many businesses. With road networks in Africa expanding, buses are heavily sought after because they can ferry a large number of people at once, and reach remote areas in the countryside. To help you better understand the differences of these 4 Japanese-brand buses, we take a side-by-side comparison of the most popular used bus models in Africa. 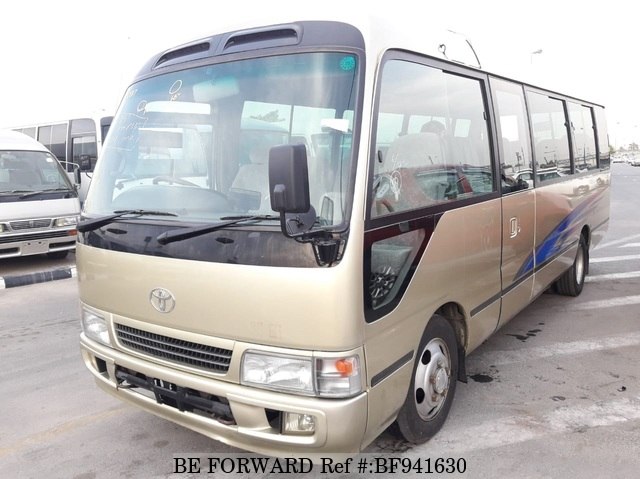 How Much is a Used Toyota Coaster?

A 3rd generation, 2001 Toyota Coaster bus costs about $15,000. Older models cost less than that, while newer models cost considerably more. On average, the price can be anywhere between $5,000 and $15,000 depending on the generation and model year.

The Toyota Coaster interior is spacious. Features like air conditioning, automatic doors, and power steering add to its convenience and make every ride a comfortable one. One of the most notable specs of the Toyota Coaster is that it can seat up to 21 people. However, when comparing the Toyota Coaster to the Mitsubishi Rosa, you will find that the Rosa has most of the time outsold the Coaster in the 20-plus-seat bus category. 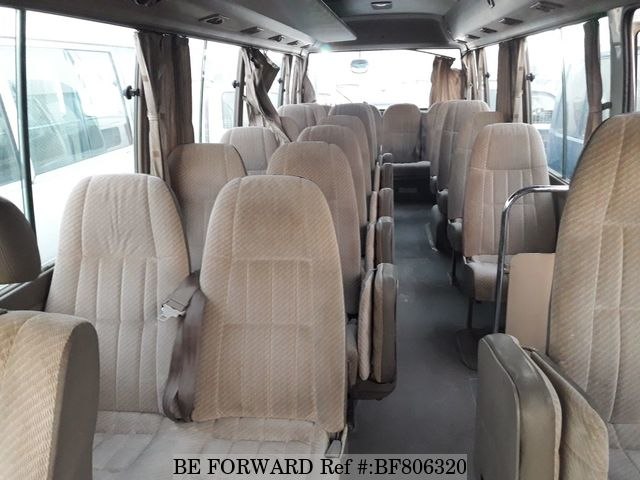 Above: Interior of a used 1996 Toyota Coaster

The interior of the Toyota Coaster is made for the comfort of the driver and the passengers. Vinyl seats, pocket storage on the back of every seat, a lot of headspace, 3-point seat belt for every passenger, and even air conditioning make the ride very comfortable. It also comes with an AM/FM radio, four speakers, and in the latest models, there are CD and MP3 outlets. In the exterior, good ground clearance, exemplary body trims, a low step for the passengers and a hydraulic door are some of the convenient features. Large windows ensure your passengers will enjoy the outside views.

The Toyota Coaster features a 4-cylinder diesel injection engine, 95-liter fuel tank, a lot of power, and an average fuel economy of 7.7km/l that shows you this bus is prime and ready for all kinds of public transport businesses. 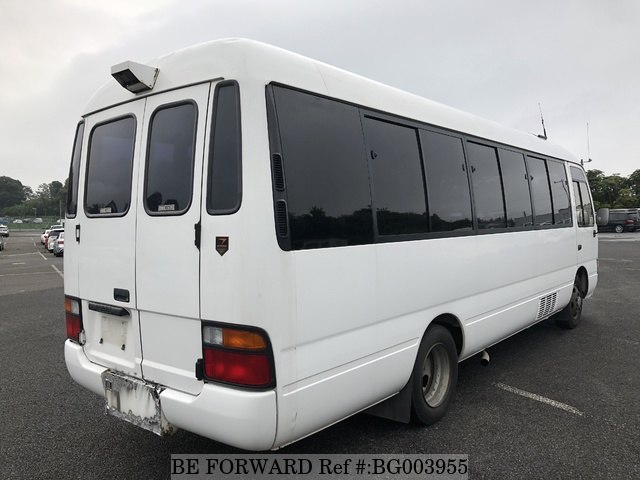 Above: Rear of a used 1995 Toyota Coaster

When comparing the Toyota Coaster to the similar Nissan Civilian, you will find that both of these buses are made for travel on paved roads, but are not good for off-road driving. If you are in the private or public transport business and plan on sticking to paved urban areas, the Coaster may be perfect for you. 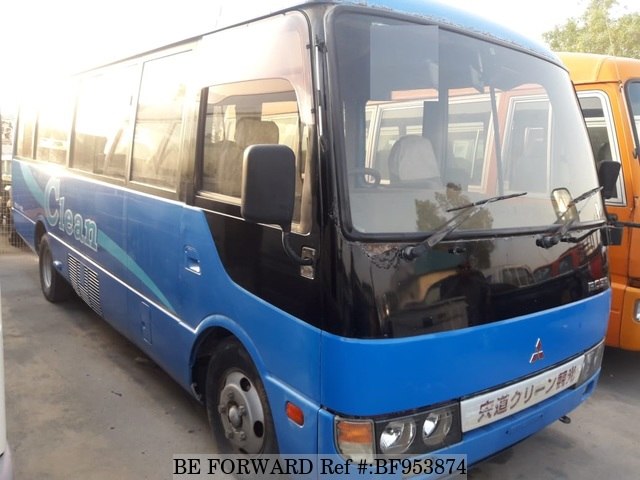 How Much is a Used Mitsubishi Rosa Bus?

The price of the popular 1998 model of the Mitsubishi Rosa starts from around $9,000. Some of the interior features to look forward to include power steering, driver airbag, multi-adjustable driver’s seat, and an AM/FM radio (sometimes with CD player).

The Mitsubishi Rosa’s interior is a display of comfort. Air conditioning, overhead rack for passengers’ luggage, and reasonable headspace make the bus feel very roomy. Depending on whether you get the short or long chassis version, this bus can accommodate anywhere from 16 to 25 people. The high back seats are also very comfortable. 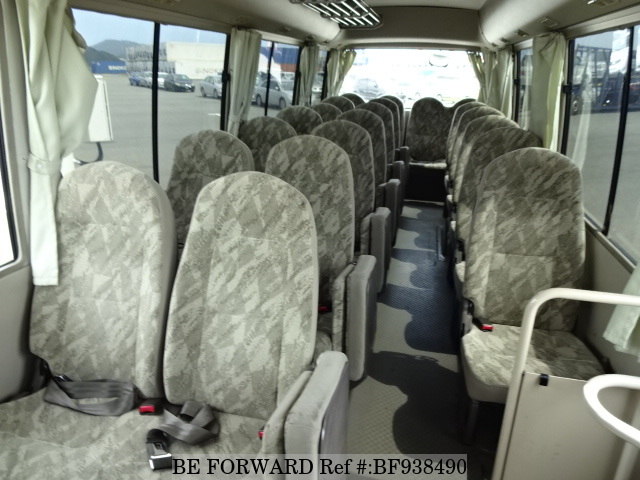 Above: Interior of a used 2003 Mitsubishi Rosa Bus

The exterior of the Mitsubishi Rosa is characterized by large windows, which make it perfect for use as a tour bus. Being bigger than the Toyota Coaster, it also works well for commercial purposes as a sightseeing or tourist bus.

The Mitsubishi Rosa’s engine specifications are not very different from those of similar buses. It comes with a 4.9-liter, 4-cylinder engine that can produce 110W of power. The fuel tank capacity is 100 liters, with fuel consumption at an average of 5.9km/l for both highway and city driving. 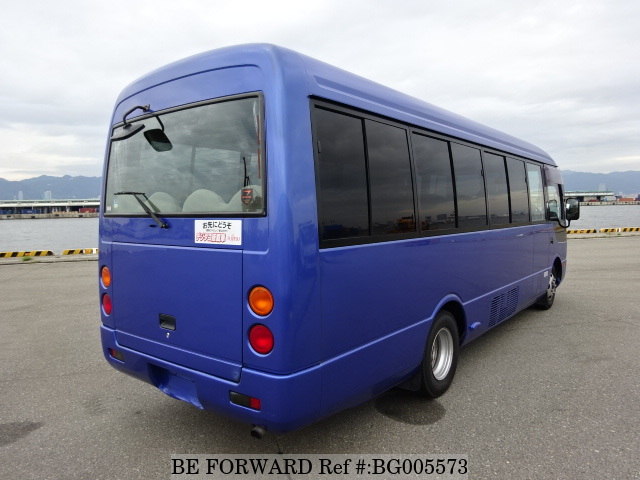 Above: Rear of a used 2003 Mitsubishi Rosa

Used Mitsubishi Rosa buses manufactured in Japan are bigger than the Toyota Coaster. The Rosa also sports a bigger fuel tank too, making it perfect for long-distance journeys. Additional interior comforts like tiltable seats for passengers also ensure comfort for any kind of adventure. 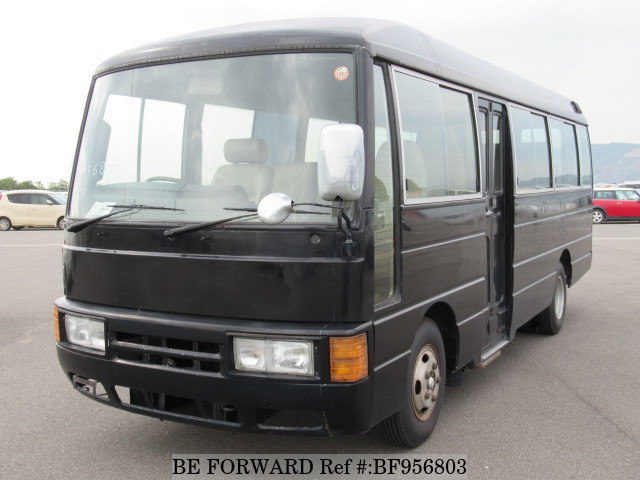 The Nissan Civilian has been in production in Japan since 1959. Today, it is available in a 26 to 30 seating capacity. As seen in the Nissan Civilian bus specifications, this bus is the epitome of passenger comfort.

How Much is a Used Nissan Civilian Bus?

The price of a Nissan Civilian bus 2002 model starts from $8,000 on average. It is very comfortable for the driver as well as passengers. The driver controls are easy to reach, air conditioning for both the driver and passengers, and an AM/FM radio. There is also enough cabin storage for the driver to access logbooks and other items easily.

High back seats for the passengers ensures total comfort. Rear air-conditioning and extra headspace also make riding in this bus memorable. The standard seating is for 26 passengers, but it is also possible to buy Nissan Civilian models with 30 seats. Additionally, 3-point seat belts for passengers enhance safety and confidence, and large windows give a nice view of the outside as the bus makes its way to its destination. 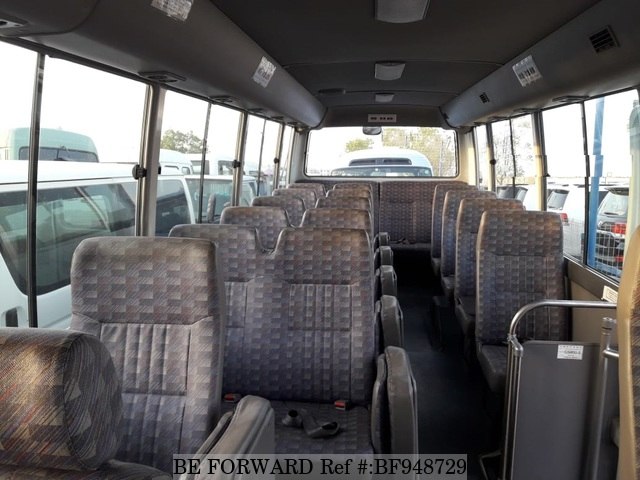 Above: Interior of a used 2000 Nissan Civilian Bus

Other exterior features of the Nissan Civilian include automatic double-sliding or folding doors. Some later trims also come fitted with fog lights, halogen headlights, and reverse camera. The rear boot also features a secure door, with plenty of overhead stowage that provide plenty of storage space for passengers’ belongings.

The average fuel consumption of the Nissan Civilian is around 13 liters per 100 km, with a fuel tank capacity of 107 liters. The popular Nissan Civilian 2002 model is powered by a 4.1 liter, 6-cylinder diesel engine, which is mated to a 5-speed manual or automatic transmission. 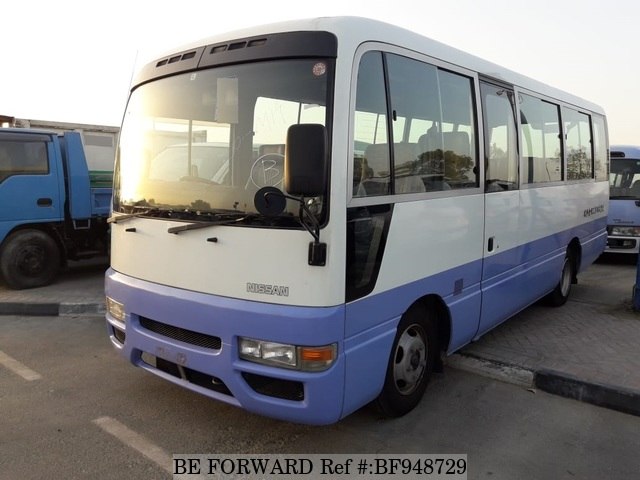 Above: A used 2000 Nissan Civilian Bus

The sturdiness and reliability of the Nissan Civilian allows it to be used for offering public bus transport services. It can also be used as a tour bus in countries like South Africa, Tanzania and Kenya because of its large sitting capacity. Its large fuel tank capacity also allows for longer excursions into game parks. 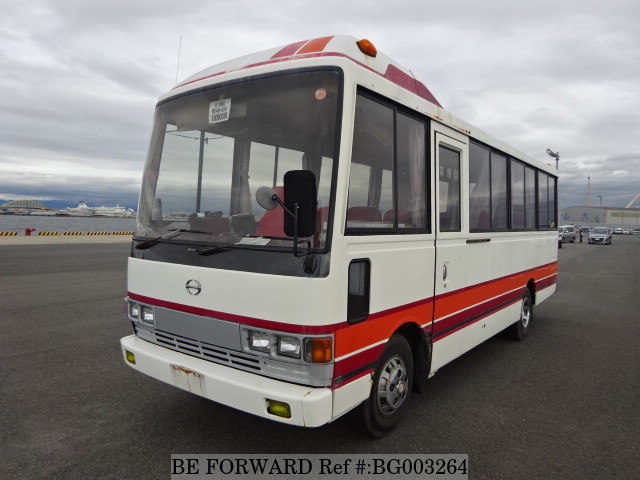 The Hino Rainbow bus has been in production since 1980, and this mid-sized bus can be used for different kinds of transport services. In Africa, it can be used as a passenger transport vehicle. In Australia, Asia-Pacific, and some parts of Europe, it is often used as a tour coach.

How Much is a Used Hino Rainbow?

A 1989 Hino Rainbow is priced from around $3,000, making it the cheapest used bus on this list. However, more recent models come with a higher price. Driver and passenger comfort are assured, with the driver’s seat in particular being adjustable in several ways. Power steering, lots of cabin storage, an automatic passenger door, and other features add to this bus’s convenience.

The exterior of this mid-sized bus is characterized by a boxy look. Many reviews from Australia and Europe say that because of this design, it is easier to convert the Hino Rainbow into a motor home. The passenger door has a lowered step to allow easy access and alighting. There is no overhead stowage for passengers, but the bus has a rear boot to fit luggage and cargo. 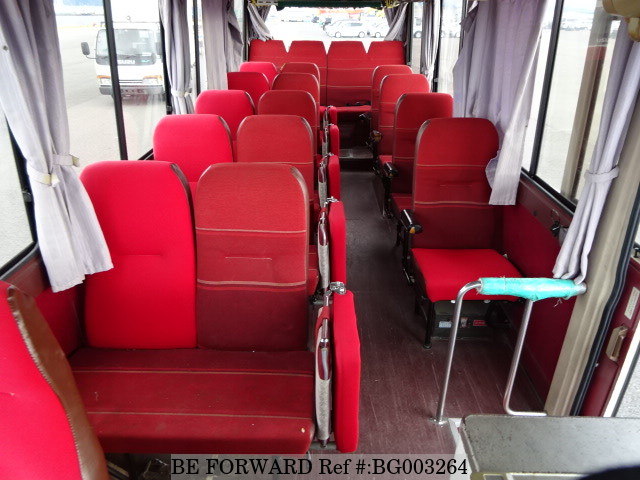 Above: Interior of a used 1989 Hino Rainbow

The average seating capacity is 16 to 25 passengers, but the bigger Hino Rainbow coaches can fit up to 57 passengers. Big windows and a large windscreen increase visibility for the driver, as well as for the passengers. A spacious glove compartment located at the center of the dashboard is also a good storage option for the driver.

The 1989 model of the Hino Rainbow bus offers an average fuel consumption of around 7km/l. The engine is typically a 7-liter, 5-cylinder diesel type, with a displacement of 7,960cc. It is mated to a 5-speed manual transmission and a 2-wheel drive train. However, note that some Hino Rainbow models come with turbo diesel engines while others are non-turbo. 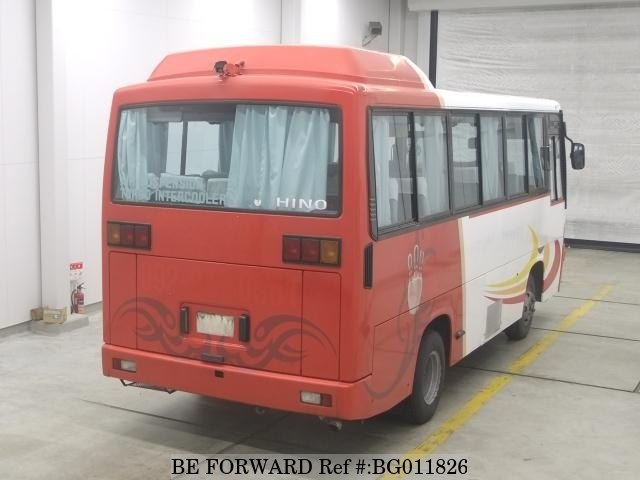 The specs of the Hino Rainbow indicate that this bus is a good option for public transport over short urban routes. It could also work well as a transport minibus for companies that pick up and drop off their employees at designated points. At 22 feet long, it is also easy to park in most places.

Coaster, Rosa, Civilian or Rainbow: Which Used Japanese Bus Is the Best?

Any of these four used Japanese buses can get you started in the transport business, and serve you for many years. All have been used in Kenya as matatu, a word coined to mean passenger transport vans, buses, and minibuses. They are also used for corporate transport to events such as team-building retreats. Requiring no special modification, any of these buses can also be used for school transport. The large sitting capacity, powerful engines and ability to do long distance journeys, offer a fast return on investment.