The general rule of thumb for determining which used cars will sell best is by taking a look at the previous year’s best-selling new cars. Chances are, you’ll also find some of the best used-car deals on the best-selling new cars of the previous year. For example, for over fifteen years, the world’s best-selling car has been the Toyota Corolla. As is to be expected, the Toyota Corolla was also one of last-year’s best-selling cars in many African countries. Waiting just one year to buy a Toyota Corolla, that is, buying one used, some have reported saving up to 34% off the price of a new one. It does make sense to wait, as a lightly used car is just as good as a new car. 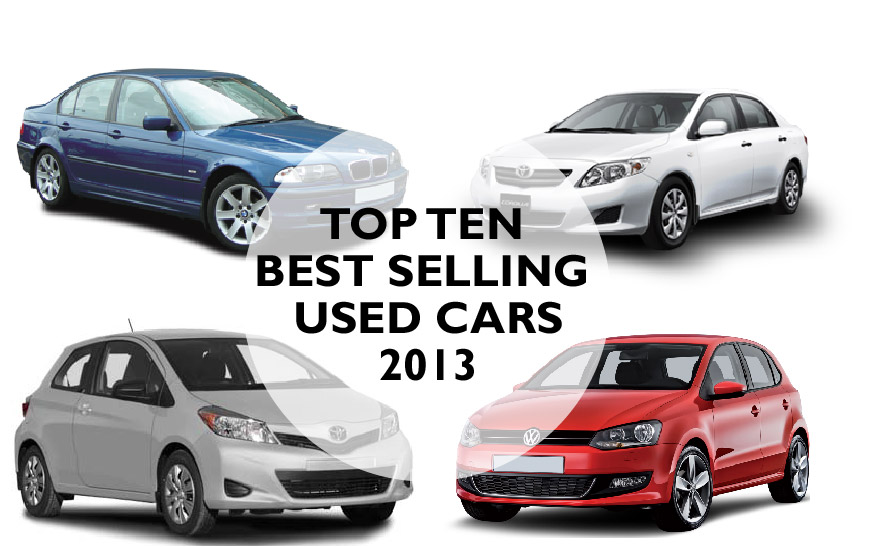 The Volkswagen Polo is one of those vehicles that boys dream about. It’s fun to whip around the block, but won’t break the bank which, for most, is a limited option. The tiny 1.4ℓ is surprisingly powerful, thanks to turbocharging and direct fuel injection. At the same time, the chassis is light and compact, which makes the most use of all the engine power available. Some might balk at the sole seven-speed automatic transmission, but the Polo also sports paddle shifters for manual mode operation.

The world’s best-selling car could probably best be described as “safe,” not so much in terms of actual vehicle safety, which it is, but with regards to overall design and performance. The Toyota Corolla is “safe” in terms of not offending anyone’s sensibilities, that is, this family sedan is designed to please pretty much everyone. It isn’t particularly powerful, nor weak, and neither is it particularly stunning to look at, nor ugly. It’s a middle-of-the-road vehicle that, somehow, is universally appealing.

A recent addition to the Toyota lineup, the Toyota Etios is a budget sedan, or hatchback, that could probably be best-described as a pre-Corolla. It’s smaller and cheaper, to be sure, and ticks off all the same boxes, equipped with a full safety package and an efficient engine and transmission. Even so, you can’t beat legendary Toyota quality and reliability, no matter how small the package. The smallest Ford vehicle available, the Ford Figo, is actually built on the tiny Ford Fiesta. It’s hard to imagine anything smaller for this price, which is what has made the Figo extremely popular. Still, it is a well-balanced vehicle, fairly spacious for four passengers, and included power steering and air conditioning, electronic stability control, and a couple of airbags. On the other hand, at this price level, you sacrifice convenience features, such as power windows and locks.

The only SUV on the top-ten list, the Toyota Fortuner is probably the most-versatile and flexible vehicle here. With seating for up to seven, as well as the flexibility to fold up seats for extra cargo space, the Toyota Fortuner can adapt to most needs of larger families. Available in petrol and diesel versions, as well as rear-wheel and four-wheel drive, there are enough options for everyone’s needs and budget requirements. BMW offers classic luxury in the BMW 3-Series, at a price that’s hard to ignore, that it’s the only luxury vehicle to make it to the top-ten list of best-selling used vehicles. True, not all of the 3-Series cars are performance cars, but even the smallest BMW 316i comes with enough luxury features to satisfy, including leather interior, full electronics package, spacious accommodations, for at least the front passengers. The adaptive suspension is a particularly nice feature, delivering a sporty and comfortable ride at the push of a button.

Can a car be affordable and convenient, as well as safe, comfortable, and fun-to-drive? Toyota Yaris could be that car. For the most part, you can only pick a couple of items off that list. Pick performance, for example, and you’ll sacrifice price or comfort or convenience, or all three. The Toyota Yaris could be the perfect balance of price, style, convenience, and performance that’s available. Still, it’s a package that is made to appeal to many, so it doesn’t stand out too far from the rest of the pack.

General Motors bills the Chevrolet Aveo as a sedan combining quality and fuel economy, admirably delivering on both counts. The engine and transmission combinations deliver as low as 7.3ℓ/100km, making it one of the most-affordable long-term purchases you can make. Another outstanding feature of the Chevrolet Aveo is safety, with a reinforced safety cage, airbags, electronic stability, one of the few small cars to achieve a five-star safety rating. The Volkswagen Golf is another one of those cars that the boys dream about, small and powerful enough to have some fun on the weekend, affordable enough not to break your bank account. In spite of the fact the Golf is billed as a hot hatch, it is surprisingly comfortable, even for rear passengers, which makes it one of the few well-rounded vehicles that exist. Of course, that’s probably the same reason it is such a good seller.

Strictly a hatchback, somehow the Renault Sandero breaks the mold and looks more like a micro-SUV. Taller and more aggressive in stance, it sets itself apart without becoming too self-assuming. Affordable and fairly economical to own, the Sandero still includes standard features such as air conditioning, power steering, power windows and locks, a well as a Sony audio system. In spite of its looks, however, the Renault Sandero did sacrifice for cargo space, so rear seat comfort is somewhat lacking.

See any that you like, be sure to let us know. You can always count on BE FORWARD when buying your next car direct from Japan.