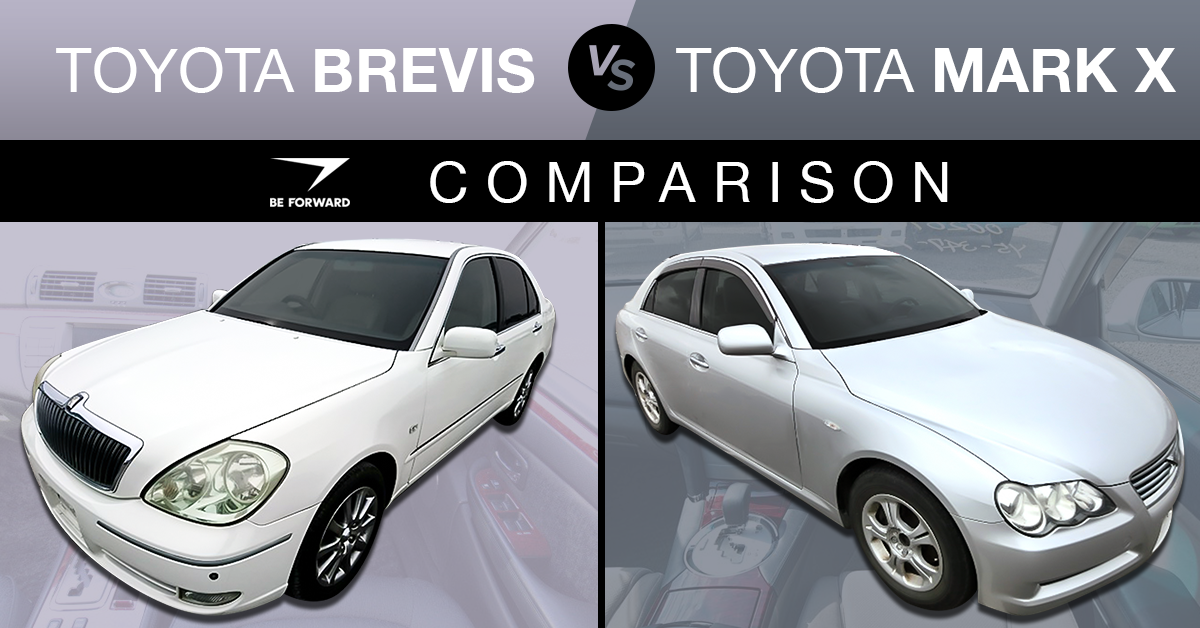 The 1st generation Toyota Brevis and Toyota Mark X are almost birds of a feather. Both are luxury sedans designed for someone looking forward to enjoying almost the same luxury that German sedans offer, but at a much cheaper price point. Here is a side-by-side comparison of the two Toyota sedans. Each car is wealthy in its own way, as our side-by-side comparison below shows, but which one is right for you? Keep reading to find out!

Between these two impressive, high-performance sedans, which stands out more? Let’s take a quick side-by-side look to see what you’re getting from the Toyota Brevis and Mark X.

The Brevis underwent some changes during the seven years that it was in production. For example, in April of 2004, the front grille design was changed into an aggressive looking mesh grille. The models that came out after 2005 came with some changes too. DVD voice navigation was one of the changes incorporated in the models coming after 2005.

As a compact, luxury sedan, the Toyota Brevis is a comfortable 5-seater. Since it was designed with premium users in mind, there is enough leg space both in the cabin as well as in the back, making it a comfortable car for very tall people. The Brevis also boasts a total trunk volume of 275 liters and max cargo capacity of 275kg.

To further enhance the feeling of luxury in this car, it features a screen for both navigation as well as television. Other features include power steering and power windows. The sound system consists of a CD changer on the dashboard, and up to seven speakers in the more higher Brevis models. There is also a memory seat on the driver’s side, and the foot pedals can adjust to suit the driving needs of the user.

The Toyota Brevis’ exterior is nicely trimmed and makes the vehicle look big. With a length of 4,550mm, width of 1,720mm and height of 1,475mm, you can see the car is indeed big. The styling of this car is adopted from the Toyota Progrès. This is a 4-door sedan with alloy wheels and a good ground clearance of 160mm, although this could be too low for speed bumps in a country like Kenya. Luckily, however, the ground clearance can be adjusted.

The engine type of the 1st generation Brevis is a 200-horsepower, 4-valve, 6-cylinder 2.5i 24V Ai250 engine. The fuel system is multipoint injection/EFi and the tank capacity is 70 liters. Using petrol and given an average consumption of 11.4 km/l both city and highway combined, you can see it’s not a very thirsty car. The drivetrain type is rear-wheel drive and has a 5-speed automatic transmission. The top speed for the Brevis is 180km/h.

Based on the Mark II Platform, there have been major changes, mostly to the bodywork and the footwork. Other improvements that came later were indicators that were mounted on the mirrors, as well as the cabin’s wood trim being replaced by aluminum trim.

Toyota Mark X is a comfortable and luxurious 5-seat sedan. This is a big compact vehicle and the size is replicated perfectly in the sitting space both for rear passengers as well as for the driver and the front passenger. Enough leg space for tall people, a large airy cabin and an armrest for the driver make driving this baby a dream come true.

The total trunk volume is 420 liters and maximum cargo capacity is 375kg. This sedan does offer additional cargo space inside the car. Just fold the rear seats, and you instantly have more space for your cargo.

The Mark X also comes with several interior features, including a navigation system and heated seats, among others. This car has responsive headrests and many safety features such as steering control, and airbags for both passenger and driver. It has a low center of gravity, thus making it very stable on the road. However, it should be noted that because the Mark X has a lot of weight and requires some time to stop after braking, driving too fast can be a bit dangerous.

On the exterior side, because it is styled after the Lexus GS, it is little wonder that this car looks as good as it does. Double exhausts and a slanted appearance make it look incredibly stylish yet aggressive at the same time. It also looks much lower to the ground than it actually is.

The Mark X is a 5-door sedan, and the doors open outwards. The rim size on the front and back wheels is 16 to 18 inches and the width is 6 to 7 inches, respectively. Mostly, this sedan is fitted with low-profile tires.

The Toyota Mark X has a 2.5-liter 4GR, 6-cylinder engine. It takes standard petrol fuel and has a tank capacity of 71 liters. The fuel system is multipoint fuel injection. The fuel consumption differs from one driver to another because it depends on many things. However, on average, expect to get 10.6 km/l combined for highway and city driving. The drivetrain type is rear-wheel drive and has a 6-speed automatic transmission. The top speed for the Mark X is 220km/h.

The minimum price for a used 1st generation Toyota Brevis is around $700. However, it can be a bit more than that depending on the engine displacement, which comes in 2990 cc and 2490 cc options. Newer models cost more, but considering that production stopped in 2007, you can expect to pay a maximum of $1,600 for the most recent model.

The minimum price for a used 1st generation Toyota Mark X is around $1,000. Buying price may also differ depending on whether you choose the 2490 cc or 2990 cc engine size, with the latter being more expensive. Depending on how recent the model is, you can pay up to $6,000.

These prices are based on average 2018 BE FORWARD listings and do not include shipping, clearing, and import tax charges

If you care about looks, features and creating an impression on the road, then the 1st generation Toyota Mark X is the car you should go for. If you are a regular out-of-town traveler and you transport a lot of stuff, once again, the Mark X is better because the rear seats are foldable to carry more cargo.

Both cars come with similar-size engines, so choosing based on the best fuel capacity can be hard. However, the Brevis is much better in this regard as it gives more kilometers per liter for city and highway driving combined than the Mark X. Engine power is about the same, but in safety, the Brevis is ahead of the Mark X as it features superior braking.

If you are buying on price, the Brevis costs less than Mark X. For both cars, spare parts are largely available. Whichever choice you make, you can be assured that you are getting a great deal with the quality and reliability that Toyota has come to be renowned for.