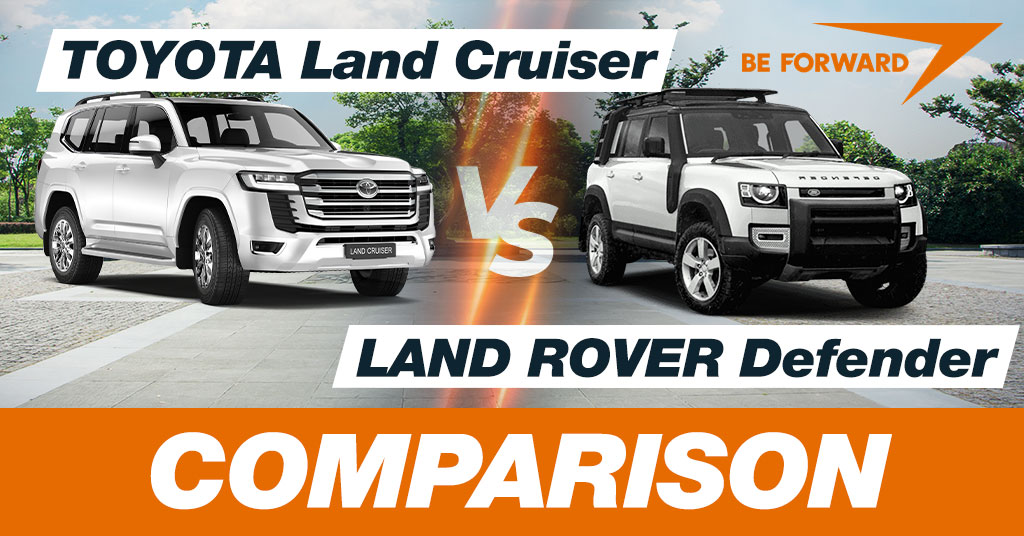 The Land Cruiser and the new Defender differ in every aspect like performance, engine, interior, and exterior.

But if you want an adventure-ready option, larger than life, you might be interested in the Land Cruiser or the Defender. You will get to know the differences between these 2 SUVs.

N.B: Prices are reflective of average BE FORWARD prices as of June 2022.

The Land Cruiser‘s reliability and longevity have led to vast popularity and it is the best-selling body-on-frame, 4WD vehicle, especially in Australia.

The interior of the Land Cruiser changed according to the model but the J300 series (new model) has a cockpit that looks modern with an advanced infotainment system and well-designed cluster. The overall cabin is spacious and attractive which offers more comfort and luxury when cruising whether off-road or on-road.

Inside the cabin, there are several storage facilities for storing items such as smartphones, beverages, handbags, and goggles. In the driver’s and passenger cabin, you will find 2 cup holders, a center box, a glovebox, and door panel storage, and in the back row, you will find a door storage panel and front seat jacket pocket.

The latest Defender might look more important than the old Land Rover Defender, but in reality, it is a totally modern, sophisticated, and high-tech off-roader vehicle with an exceptional look and appearance. The new Defender is available in 110 body styles on all variants and in 2-door 90 and 4-door advanced-duty off-roading equipment.

The interior is spacious and luxurious in the new Defender. In the first row cabin, there is the glove box, a large storage shelf with plenty of room for snacks, a center box, phone, keys while in the mid-row you get door pocket panel storage, and 2 cup holders at the center console.

The new Defender’s exterior is without match. Its unique shape instantly demonstrates the vehicle’s character.

The Land Cruiser‘s fuel economy is around 7.5 km/L in urban, and 11.2km/L combined but depending on the model and year of manufacture.

The new Defender powered by a V8 engine with a maximum power output of 518-hp supercharged is the best choice for a person who prefers a more performance vehicle and Land Rover state can hurry the Defender to 0-100 Kph in just 4.9 seconds. Every version comes with 4WD and locking differentials for navigating treacherous terrain.

Toyota has a capable full SUV with enough power and comfortability such as the Toyota Land Cruiser the same as the new Land Rover Defender.