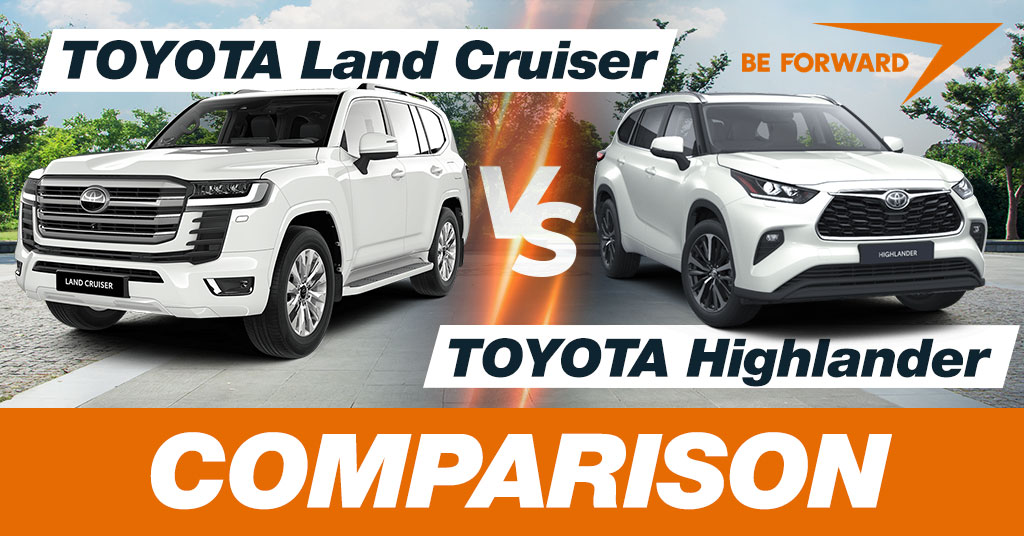 When we talked about Toyota, we talked about the famous and leading car manufacturer in the world. Toyota is the best-selling and biggest vehicle manufacturer around the globe, it is known for manufacturing different kinds of vehicles for everyday use such as SUVs, sedans, hatchbacks, pick-up trucks, wagons, mini-van, and buses. In this article today we are going to compare the two most powerful SUVs from Toyota lineups such as the Toyota Land Cruiser vs Toyota Highlander.

We are going to look for performance, engine size, cabin, cargo space, interior, and exterior.

N.B: Prices are reflective of average BE FORWARD pricing as of July 2022.

Toyota wrote another history in the Land Cruiser 300 Series which is different from previous generations. The Land Cruiser J300 series is the latest generation in a series of J300. The Land Cruiser J300 series was built on the body-on-frame TNGA-F platform, the frame itself was reformed to reduce weight and increase rigidity. Compared to its predecessor the total weight of LC J300 was reduced by 200 kg. Other improvements include improved suspension structure, lowered center of gravity, and weight distribution.

The new J300 series interior is a full package and far more high-tech while the old car looked like it was stuck in the early 1990s. The LC J300 dashboard design has been revised and received a completely new touchscreen infotainment system. The LC J300 series has a full taste of comfort and a spacious interior.

From the first to the third row, there are enough storage facilities that are useful for storing items such as handbags, coins, smartphones, beverages, etc. And everything in the dashboard in the LC J300 is well laid out.

Behind the back seats, the LC J300 series has enough cargo space of 1131L, and when the back seat is folded the space increases to 2052L. It’s large; you might be lucky to get 460L in the very largest example if you’re used to a small SUV.

The cabin is spacious and modern to the modern car-like Highlander, and the front cabin is well designed. Inside the Highlander, you will find several storage facilities that fit to store coins, documents, etc.

The cargo space behind the 3rd-row fits an ordinary 4 carry-on suitcases; the Traverse fits 6.

The exterior appearance tries to resemble the latest Toyota RAV4 that’s aggressive-looking with proper headlights attached well with a front grille and bumper. The headlights are well placed and designed. The fog lights are standard for all variants.

The LC J300 series comes fitted with three engine options in V6 configuration only available both in petrol and diesel such engines are twin-turbo 3.4L V35A-FTS, 1GR-FE 4.0L petrol engine, and twin-turbo 3.3L F33A-FTV diesel engine. These engines transfer power to the wheel via a 6-speed automatic (GRJ300), or 10-speed AWR10L65 automatic for VJA300 and FJA300.