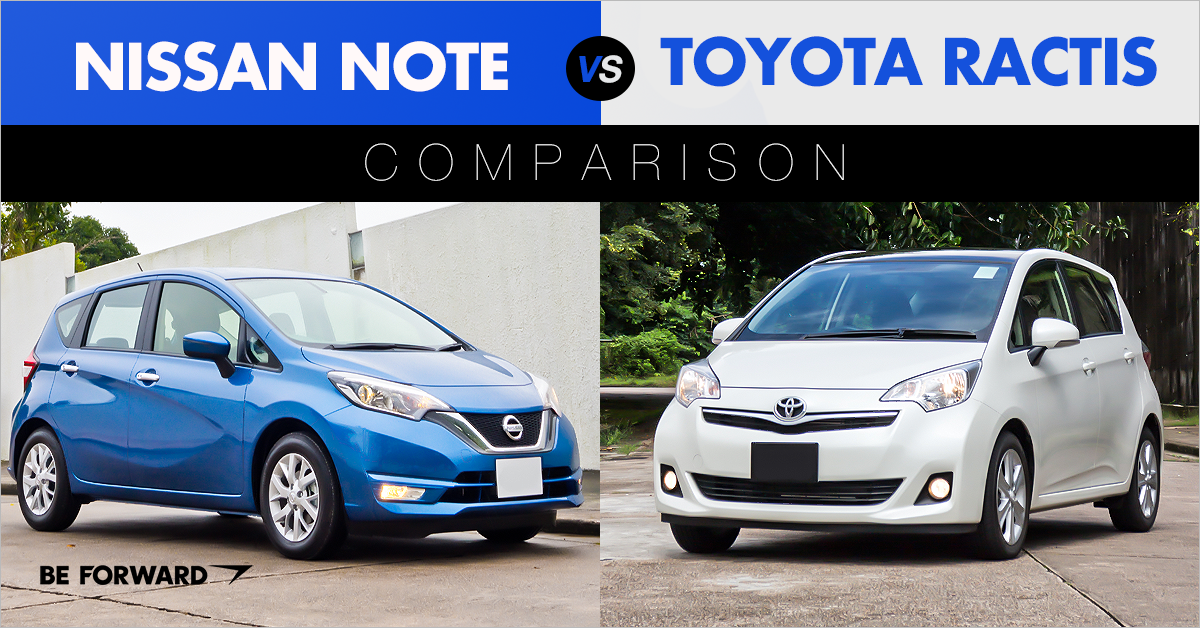 The first-generation Toyota Ractis and Nissan Note are both compact hatchbacks, competing for the same type of car shopper, and both are equally popular used Japanese imports in Africa. While the two hatchbacks share many similarities, they are often compared to each since they are made by competing companies—Toyota and Nissan. Each car is wealthy in its own way, as side-by-side comparison below shows, but which one is right for you? Keep reading to find out!

What is a Toyota Ractis?

The Toyota Ractis started production in 2005, and soon became a hit in African countries such as Malawi. Meant to be a replacement for the Toyota Funcargo that was discontinued in 2005, the Ractis is bigger, better, more luxurious and more efficient. The Ractis also features more space thanks to the high roof and the ability to flat-fold the back seats to create more cargo space, all of which have proven to be unbeatable. 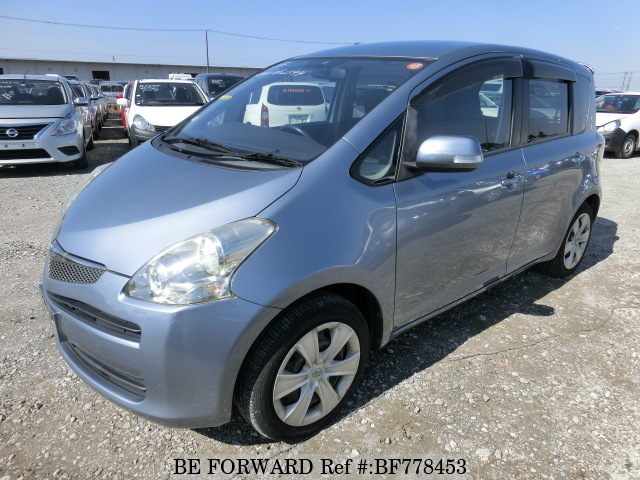 What is a Nissan Note?

The Nissan Note looks like a cross between a hatchback and a small multipurpose van. The first Nissan Note was released in 2006 and was in production until 2013 when it would later be replaced by the Nissan Invitation, an improvement on the Note hatchback. The first Note was based on the Nissan Tone. In 2007, the Note underwent an update, and most notably it began to target the European market more closely. Some of the improvements included armrests for the driver’s seat, DVD navigation, door and seat trim fabric, and many more. 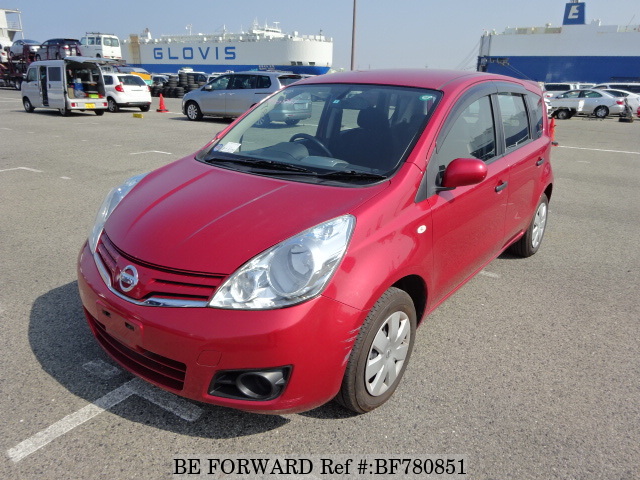 The Toyota Ractis is a 5-seater hatchback with only second row seats, no third row. This is a very comfortable car, which is one of the many reasons for its popularity. Its high roof and big cabin space are a plus for many people who are looking to buy it for business as well as for family use. Leg and headspace are unequalled in this hatchback, in addition to lots of cabin storage for mobile phones, books and other small items. 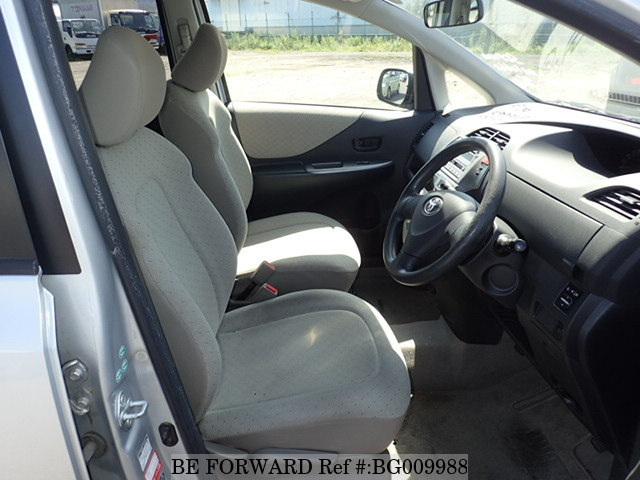 Above: Interior of a used 2005 Toyota Ractis

The Ractis features a total trunk/boot volume of 285 kg, which is bigger than most other hatchbacks will offer. If you find yourself needing extra space for cargo, just fold the rear seats. They fold down flat to essentially convert this vehicle from a hatchback into a compact minivan and increase its cargo space tremendously. With folded rear seats, the cargo space increases from 285kg to 429kg. 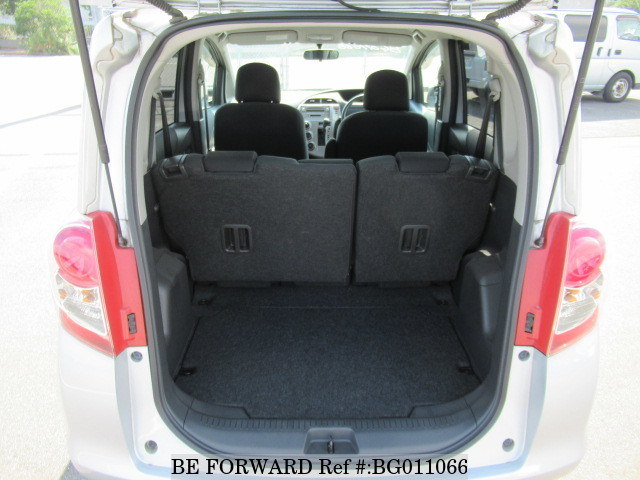 Above: Boot of a used 2010 Toyota Ractis

The Toyota Ractis comes with some really great features that make driving this car a lot of fun. The 2010 model of the Ractis 1st generation, as an example, is a marvel to look at. It has six airbags, CD and radio player, and keyless entry. GPS navigation is an option, but comes standard on some model grades. 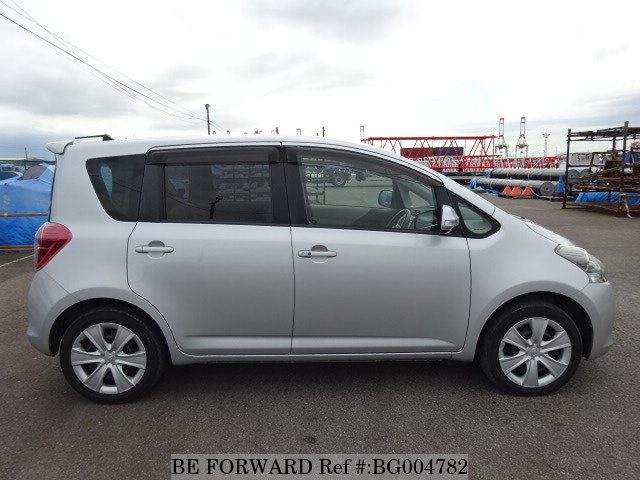 Above: Side view of a used 2010 Toyota Ractis

The exterior of the Ractis is indeed pleasing if you love alloy rims, fog lights and some fantastic grooves along the body. The bonnet is nicely slanted and has two visible groove lines that form a v-shape, which meets at the middle of the front. Looking at this hatchback from the front, you will love the streamlined shape. 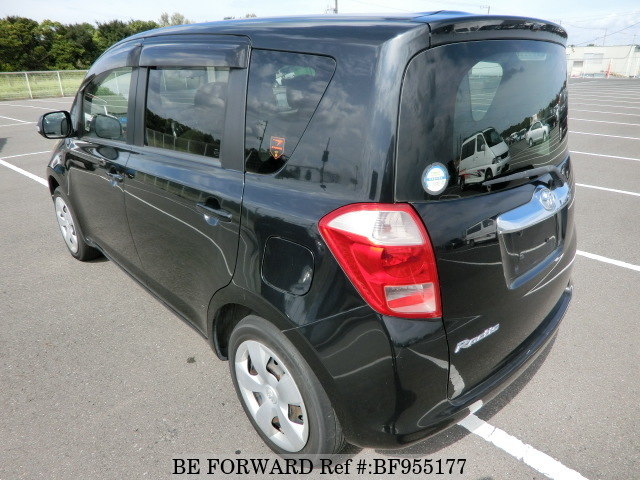 Above: Rear of a used 2007 Toyota Ractis

The ground clearance of 5.7 inches is high enough to clear any speed bumps you will find on the road without any trouble. The Ractis is a 5-door hatchback, (including the boot door) with central locking, and wheels are 16 inches for both rear and front. This car is available in 4WD or 2WD (rear wheel drive).

The interior of the Nissan Note is particularly appealing. It is not as spacious as the Ractis due to a lower ceiling, but it still offers a lot of comfort. It is a 5-seater hatchback, and there is enough space for up to five medium sized adults. If you are buying it as a family car, you will be happy to know that it can accommodate a child’s seat easily thanks to the wide opening doors, and provides a lot of legroom at the back. 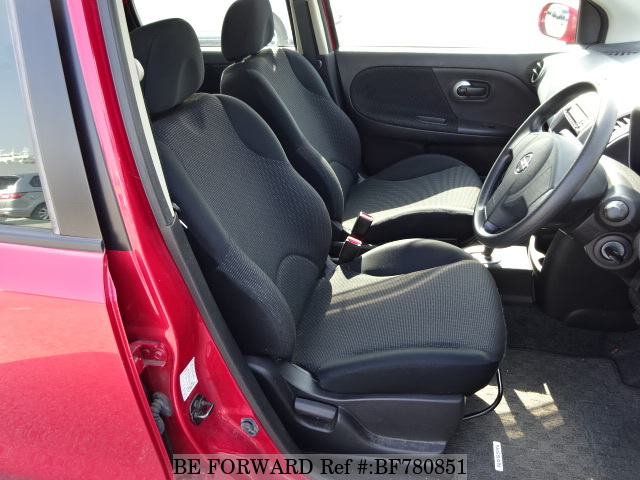 Above: Interior of a used 2009 Nissan Note

People say that this car could seat seven people, but Nissan deliberately declined adding a third row of seats to give the five passengers lots of room. The trunk space is 280 kg/liters. However, this can be increased much more to 437 kg worth of cargo space when the sliding rear seats are pushed forward. If you are carrying bigger items, you can recline the front passenger seat to a flat position in order to hold bigger cargo. 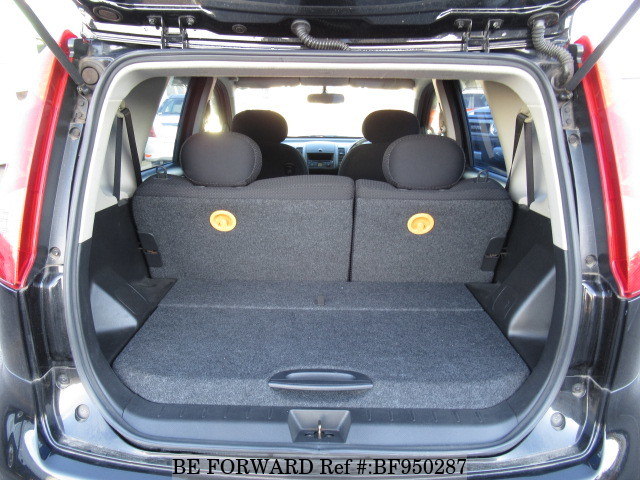 As for the interior features, there are many. First, there are the storage features that include the glove compartment and cupholders, along with a place for your cellphones and expanding pockets located on the back of the rear seats. 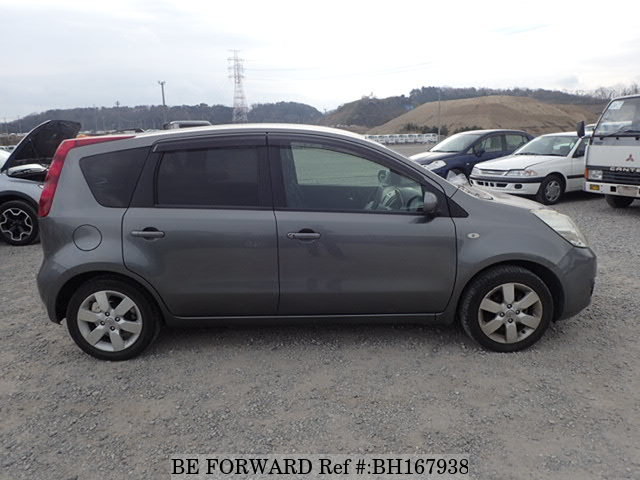 Then there are folding trays, similar to what you would find on an airplane, mounted on the back of the front seats. Other interior features include 4 airbags, remote central locking, airbag switch for passenger, electric windows, cruise control and center armrest. High quality stereo speakers and electric folding mirrors make up some of the other many features. 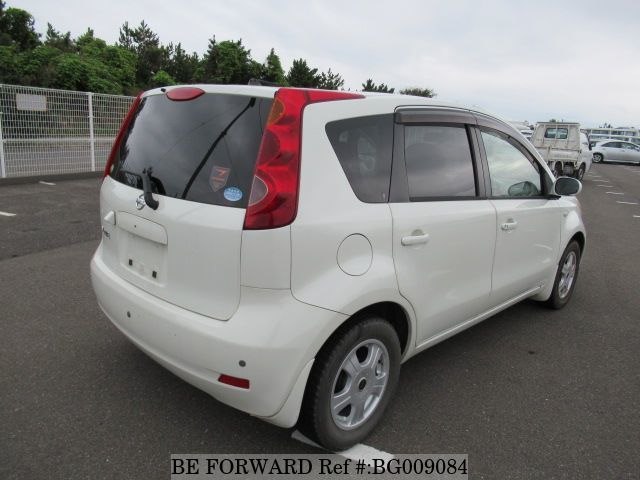 The exterior of the Nissan Note is styled after the Nissan Murano. While Toyota has been known for investing more in functionality than looks, Nissan invests in looks, and that is why the Note looks so pleasing. Additionally, the Boomerang rear lights make it look like it shares the same features as the Nissan Juke. The beautiful boxy look makes this car very appealing. The seats are part leather and part fabric,  and the steering wheel is coated in genuine leather in most models. It is a 5-door mid-sized car with 15-inch alloy wheels.

On average, earlier models of the Toyota Ractis are available in two engine types: the 1.3-liter 2SZ engine, and the 1.5-liter 1NZ engine. The latter is available for the 4WD options and the former for the 2WD options. The 2-wheel drive one is most popular and is actually a front wheel drive. This is a 4-cylinder engine, and the fuel system is multi-point fuel injection. 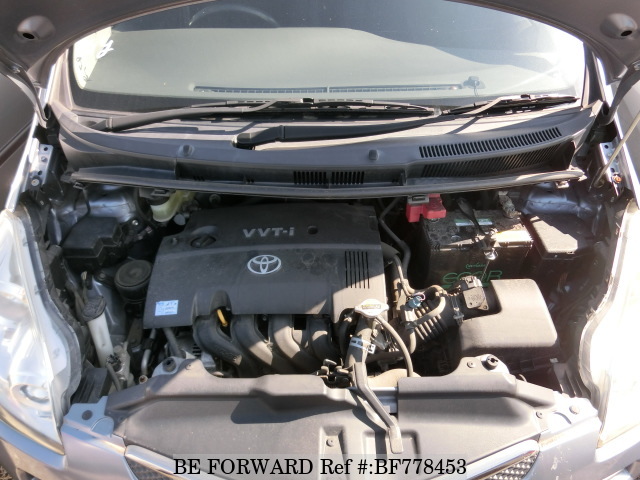 Above: Engine of a used 2008 Toyota Ractis

Its fuel tank capacity of 42 liters works nicely with the average consumption of this car, which comes out to an average of 18.2 kilometers per liter (highway and city combined). It can be used as a personal car during the office days, and then be converted into a family car for long weekend drives. The drivetrain type is front wheel drive and the transmission is automatic 5-speed. The top speed for the Ractis is 200km/h.

The very first engine on the Note was a 1.4-liter petrol engine but later there would come 1.6-liter engines. However, the 1386cc (1.4L) CR Twin Cam engine that is so popular with Nissan is the favorite for most people. It is a 4-cylinder engine and, like the Ractis, runs on a multi-point injection fuel system. 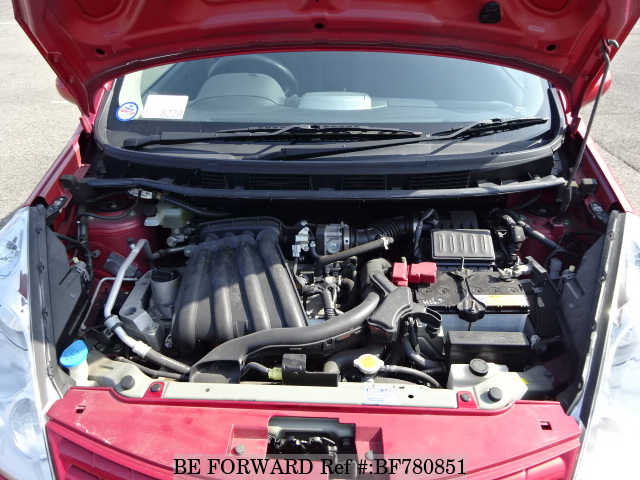 Above: Engine of a used 2009 Nissan Note

The Note has a tank capacity of 46 liters. It uses petrol, with an average consumption of 15.9 kilometers per liter. The drive train is two-wheel drive and the transmission can either be manual 5-speed gear or automatic. The top speed is 165 km/h.

So what should you buy? Based on this review, it depends on what you are looking for in a hatchback. If you are looking for more cargo space, features and performance, it seems like the Nissan Note is the ideal car for you, as it has a lot of extendable space. It also boasts good performance with the 1490cc engine, slightly more powerful than the 1300cc Ractis. 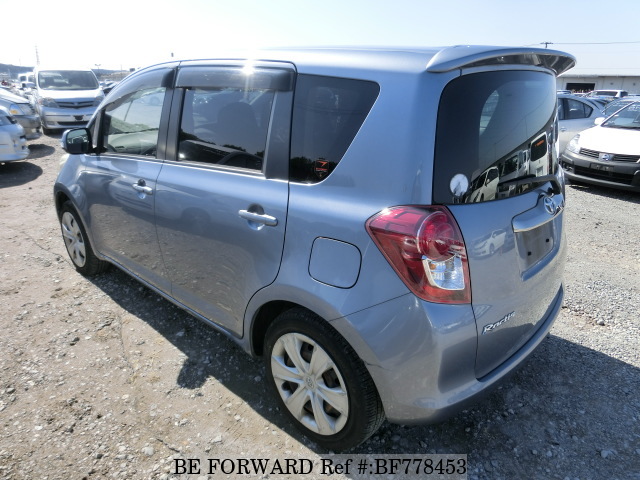 Above: Rear of a used 2008 Toyota Ractis

If you are looking for fuel efficiency, then the 1300cc Ractis is the better choice. The availability of spare parts in places like Africa is the same for both cars. For your budget, the Nissan Note on average is cheaper than the Ractis. Toyota prices go up because most people say they have a resale value, but you are not buying a car to sell. You are buying a car to use. 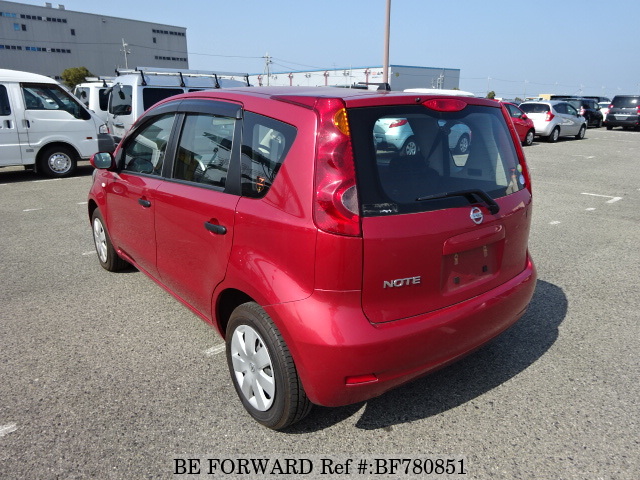 Strengths & Weaknesses in a Nutshell

Choose BE FORWARD for All Your Hatchback Needs