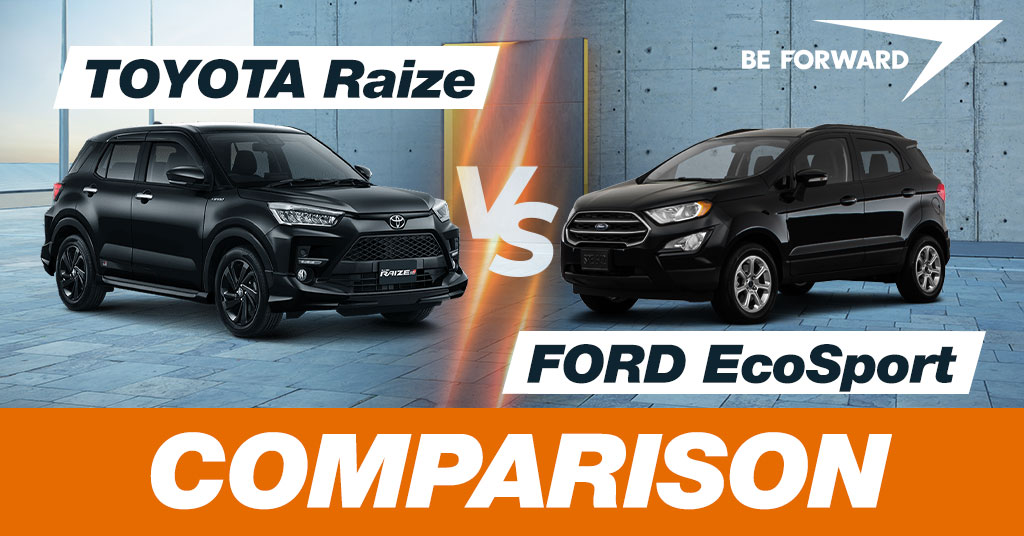 Ford and Toyota are known for manufacturing powerful, durable, and reliable vehicles and best-sellers in the sedan, hatchback, wagon, and SUVs.

The Raize and Ecosport are the subcompact crossover SUVs, one produced by Toyota and the second one by Ford. This review of Raize and Ecosport is full of facts about engine size, performance, exterior, and interior appearance.
When a person selects which car suits their preference, every person has their own taste but most people look for interior space, performance and price, without forgetting the fuel economy.

In this review, you will understand both models, Raize and Ecosport in terms of fuel consumption, engine capacity, performance, interior, and exterior. Which one will you buy: Toyota Raize or Ford Ecosport? Take the time to read to the end of this review and you will come up with which one to buy.

Toyota Raize is manufactured by Daihatsu and sold under the Toyota brand as the Toyota Raize and also rebadged as the Rocky. It was revealed on 23 October 2019 at the 46th Tokyo Motor Show under the “New Compact SUV” name. Went on sale on 5 November 2019 and in the Japanese market, it replaced the Be‣go. The 2017 DN Trec concept previewed Raize‘s design.

The Raize exterior has an attractive appearance in the front, it has a trapezoid lower grille and angular bumper corners that create a wide and powerful frontal appearance, while the sequential turn lights and the use of thin LED headlights that appear to flow from the inside to the outside of the car hint at the car’s advanced technologies.

The interior of the Raize has adequate space, with features and interior comforts. The interior is well arranged and designed, the buttons on the steering wheel make the driver’s driving comfortable without putting his hand far from adding or reducing radio volume and the buttons are also easily accessible.

The Toyota Raize has a class-leading luggage capacity for a compact SUV of 369L, when extra space is needed the back seats can be collapsed forward to create a flat, long space capable of storing long items of luggage.

Ecosport is a subcompact crossover SUV, originally built by Ford Brazil in Brazil in 2003, at the Camaçari plant. A 2nd generation concept model was revealed in 2012 and is also assembled in new factories in Russia, Romania, India, and Thailand. All models are powered by front-wheel drive with a manual transmission as standard.

The Ecosport has a roomy interior and the dashboard is well arranged while the steering wheel does not have as many buttons as the Toyota Raize but the buttons are easily accessible.

In the cabin, you will find storage facilities that are for storing items such as watches, coins, goggles, handbags, beverages, and smartphones. In the driver row, you will find a center box, door panel storage, and a glovebox. In the second row, there is a cup holder attached to a center box and the door storage panel.

The Ecosport has a large cargo space compared to the Toyota Raize. When more space is required the back seats can be folded down. The cargo space can accommodate luggage for a family of 5 or long luggage.

The 1st generation Ecosport is powered by 1.0L Supercharged I4, 1.6L I4, 2.0L I4 gasoline engines, and 1.4L I4 diesel engines. These engines transfer power to the wheel via a 5-speed manual, 6-speed manual, or 4-speed automatic.

The 1.0L 3-cylinder engine has Ti-VCT (Twin Independent Variable Camshaft Timing) which contributes to the turbocharged engine’s peak torque starting at 1,300 rpm. The Ford Ecosport can tow up to 700 kg.

The Toyota Raize and Ford Ecosport are the best subcompact Crossover SUVs with sufficient power with comfortability but the Toyota seems to be a truly comfortable SUV while Ecosport seems to be a tough vehicle..

Both vehicles are good but in terms of fuel consumption, the better choice is Toyota Raize which offers a good fuel economy compared to Ford Ecosport.

The Ecosport seems to be cheaper than the Raize which seems expensive compared to Ecosport according to the prices on BE FORWARD website. In terms of top speed, the best choice is Ecosport compared to Raize.

For a larger fuel tank, the Ecosport is superb for a long journey without a refill. If you look for buying one of these vehicles, visit BE FORWARD.