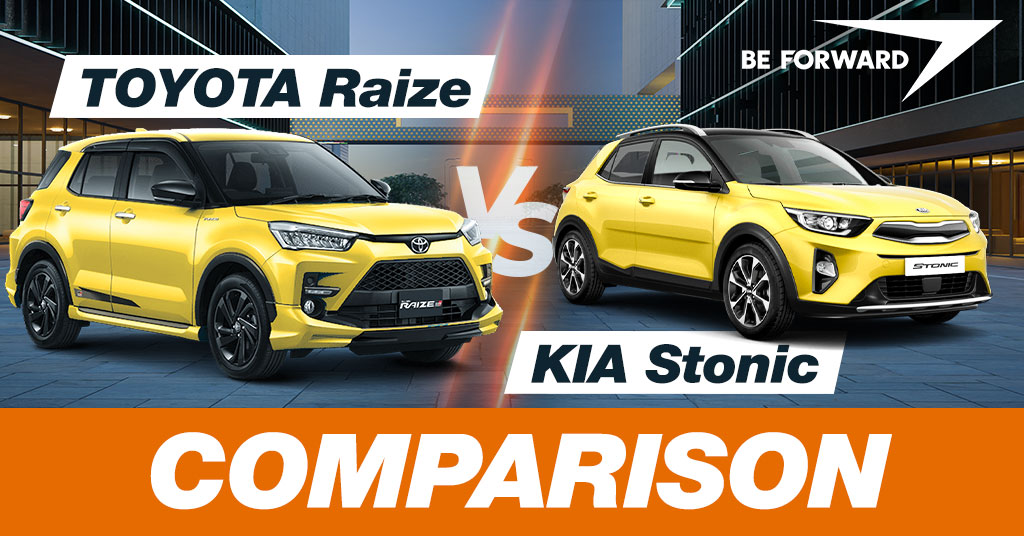 Toyota is known for manufacturing powerful, durable, and reliable vehicles and best-sellers in the sedan, hatchback, wagon, and SUV while the Kia is not well popular in some markets but they produce durable and reliable vehicles as well.
The Raize and Stonic are the subcompact crossover SUVs produced by Toyota and Kia. This review of Toyota Raize and Kia Stonic is full of facts about engine size, performance, exterior, and interior appearance.
When people choose which car brand fits their purpose, every person has their feelings but most people look for fuel economy, performance, interior space, without leaving behind the financial aspects.

In this article, you will get to know both models Toyota Raize and Kia Stonic in terms of engine capacity, fuel consumption, interior, exterior, and performance. Which one will you buy: Raize or Stonic? So read to the end and you will come up with which one to purchase.

Toyota Raize is manufactured by Daihatsu and sold under the Toyota brand as the Toyota Raize and also rebadged as the Rocky. It was revealed on 23 October 2019 at the 46th Tokyo Motor Show under the “New Compact SUV” name. Went on sale on 5 November 2019 and in the Japanese market, it replaced the Be‣go. The 2017 DN Trec concept previewed Raize‘s design.

The Raize exterior has an attractive appearance in the front, It has angular bumper corners that create a powerful frontal appearance, while the sequential turn lights and the use of thin LED headlights that appear to flow from the inside to the outside of the car hint at the car’s advanced technologies.

The interior of the Raize has satisfactory space, with interior comforts. The interior is well designed and arranged, the buttons on the steering wheel make the driver cruising comfortably without putting his hand far from pressing those buttons, the buttons are easily accessible.

The Raize has a 369L which is roomy luggage capacity for a compact SUV when more space is required the rear seats can be folded forward to create a flat, long space capable of storing long items of luggage.

The Stonic is a subcompact crossover SUV found in (B-segment) built by Kia Motors. The name is derived from the words “stylish” and “iconic”. On 20 June 2017, the Stonic debuted in Frankfurt and on 13 July 2017 in South Korea and was released in the 4th quarter of 2017. It is sold and marketed as the Stonic KX1 in China.

The Kia Stonic has a good exterior appearance while the front grille is designed and positioned well and attached well with a front bumper hence making a good look. The headlight is well positioned with a good look and makes the Stonic look modern in appearance.

The Kia Stonic has a large interior of its kind and the dashboard is well organized and designed while the buttons on the steering wheel have arranged well and are easily accessible.
In the cabin, you will find compartments that are used for storing items such as goggles, watches, coins, handbags, smartphones, and beverages. In the first row, you will find door panel storage, center console storage compartments, Map pockets in front doors, a glovebox, and a center box. In the second row, there is a door storage panel only and a front passenger seatback pocket.

The Kia Stonic has a large boot space compared to the Toyota Raize. When extra space is needed, the rear seats can be folded down. The boot space can accommodate luggage for a family of 5.

Depending on the model and the engine size, the fuel economy is estimated at around 13.2 Km/L – 21.0Km/L.

The Toyota Raize and Kia Stonic are good subcompact Crossover SUVs with enough power, comfortability, and good for town driving but the Toyota seems to be a truly comfortable SUV while Kia Stonic seems to be a modern vehicle. Both cars are good, but in terms of fuel consumption, the better choice is Kia Stonic which offers a good fuel economy compared to Toyota Raize.

The Kia Stonic seems to be cheaper than the Raize according to the prices on BE FORWARD website. In terms of top speed, the best choice is Kia Stonic compared to Raize.

For a larger fuel tank, the Kia Stonic is superb for a long journey without a refill. If you are looking into buying one of these vehicles, visit BE FORWARD.