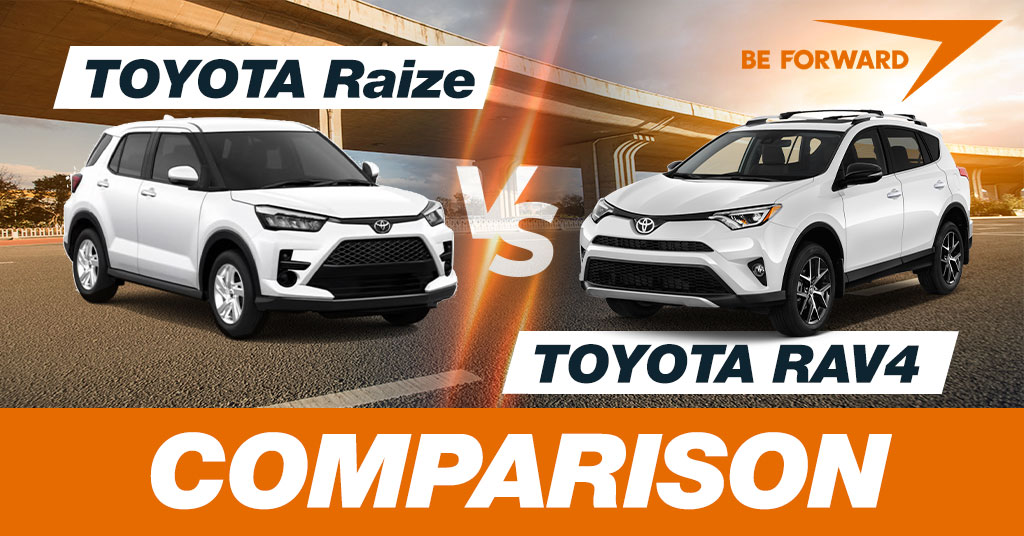 Apart from producing about 10 million vehicles per year, Toyota is one of the largest automobile manufacturers in the world and a popular brand manufacturing reliable, durable, powerful, and luxury cars. In different markets, Toyota becomes the best-seller in the pick-up, Hatchback, sedans, and SUV vehicles whose status speaks for itself like Toyota Raize and Toyota RAV4. Toyota RAV4 has been around for many years, but this Toyota Raize has been around for only 4 years. In this article, we will review and compare the two.

Toyota is well-known for producing a variety of functional, everyday cars. If you are looking for a luxury or off-road car, you might be interested in the Toyota RAV4 or the Toyota Raize. Therefore in this review, you will get to know the differences between these 2 crossover SUVs. So read to the end to understand these 2 cars.

N.B: Prices are reflective of average BE FORWARD prices as of April 2022.

The Toyota Raize is a dynamic, active SUV, and the perfect companion for your everyday life. Powered with an all-new platform enabling world-class ride comfort and handling stability, the Raize is guaranteed to deliver. Toyota Raize creates a totally new standard and provides an outstanding driving experience whether for a weekend adventure or the daily commute. Within its impressive cabin time spent will be enjoyable for all passengers and drivers alike. Raize Your Style, Raize Your Vibe, Raize Your Lifestyle!.

The smooth interior design offers excellent comfort while riding for all passengers. The Raize SUV provides a spacious cabin, a fun-to-drive atmosphere, and the interior is well arranged.

In the cabin, you will find storage sections that are used for storing items such as handbags, beverages, and smartphones. You will find a door storage panel only in the passenger row, a door panel, a center console bin, and a glovebox in the driver’s cabin.

The Toyota Raize has ample luggage space as well as an improved driving experience and boasts a class-leading luggage capacity; the back seats can also be folded to increase the boot space, enabling long items or particularly large cargo to be loaded.

The Raize has a trapezoid lower grille and the bumper corners are angular to create a wide and powerful frontal appearance. The fitment of thin LED headlights, sequential turn lights, and daytime running light offers you both a prestigious feeling and maximum visibility.

Toyota RAV4 was designed for consumers wanting a vehicle that had most of the benefits of SUVs, such as higher visibility, the option of full-time 4WD, increased cargo room, fuel economy, and maneuverability of a compact SUV. The name RAV4 stands for “Recreational Active Vehicle with 4-wheel drive”, although not all models come equipped with 4WD.

The RAV4 is a 5-door 5-seater SUV hardtop, with a spacious cabin, great luggage capacity, and good storage space.

Both driver and passengers are afforded plenty of storage booths which include door pockets with bottle holders, a decent-sized cubby box, and 4 cup holders.

The RAV4 has a 550L cargo space with the back seats in place. The boot space increases to 1760L with the rear seats folded flat.

The 5th generation (XA50) RAV4 receives the most minor of updates such as more aggressively-styled headlamps, LED fog lamps which are standard on XLE Premium, Limited, Adventure, and TRD Off-Road trims that gave this compact SUV a heavier, a rugged look in place of the earlier generation’s softer lines.

Toyota Raize is powered by a 1KR-VET 1.0L I3 turbo, 1198 cc I3 WA-VE petrol engine, and 1198 cc WA-VEX I3 (A202) petrol hybrid. These engines are supported by a 5-speed manual CVT. The 1198 cc I3 WA-VE powertrain produces the torque of a 1.5L-class engine at a diversity of engine speeds, from low speeds upwards, which results in powerful acceleration. The hybrid version is equipped with an 1198 cc I3 WA-VEX (A202) attached with an Electric motor of 78 kW E1A AC synchronous.

While the hybrid version is attached to a battery of 1.6 kW·h Ni-MH and 18.1 kW·h Li-ion for a plug-in hybrid.

The Toyota Raize and Toyota RAV4 models are nice cars in almost every aspect of a car. There isn’t a bad choice between the Toyota RAV4 and Toyota Raize competing. Both of these vehicles have a comfortable ride, handling, and spacious seating space, provide upscale interior trimmings, and are equipped with active safety features. The RAV4 performs better off-road and rates higher for predicted reliability and while Toyota Raize offers better fuel efficiency in its standard configuration. On the other hand, Toyota Raize feels a bit faster when driving. Which one will you go to? Look at our BE FORWARD.