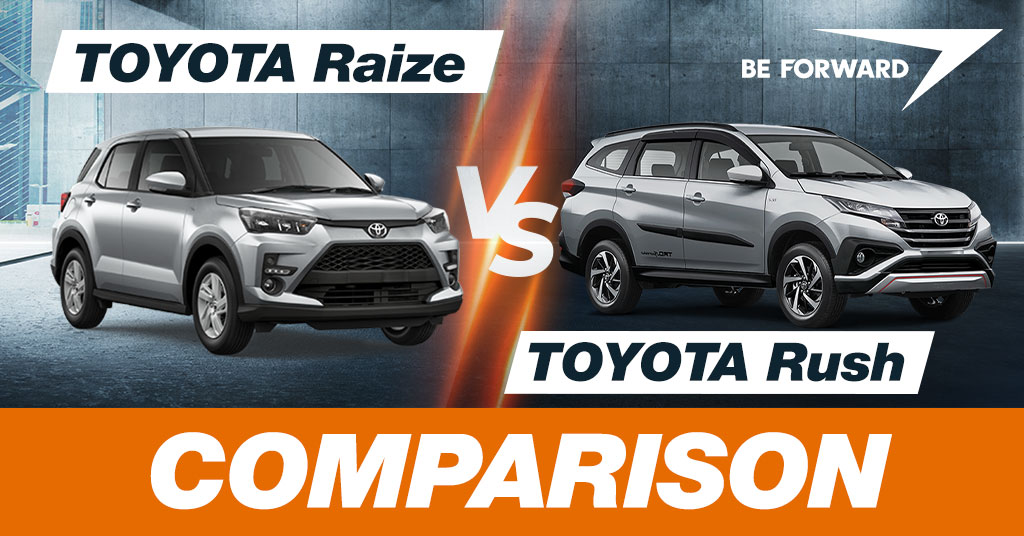 The Raize and Rush are the subcompact crossover SUV produced by Toyota. This review of Rush and Raize is full of facts about performance, exterior, interior appearance, and engine size.

The Raize and Rush differ in other aspects like interior, engine, performance, and exterior look but they resemble in some aspects like carrying capacity in some models.

N.B: Prices are reflective of average BE FORWARD pricing as of March 2022.

Toyota Raize is sold under the Toyota brand as the Toyota Raize and is produced by Daihatsu also rebadged as the Rocky. On 23 October 2019, it was revealed at the 46th Tokyo Motor Show under the “New Compact SUV” name. On 5 November 2019 went on sale and it replaced the Be‣go in the Japanese market.

The interior has suitable space, with interior comforts. The interior is well arranged and designed, the steering wheel makes the driver drive comfortable without putting his hand far from pressing the buttons, and the buttons are easily accessible.

In the driver and passenger row, you will find storage compartments that are used for storing items such as smartphones, handbags, and beverages. You will find a center console bin, a glove box, a door panel in the driver’s cabin, and a door storage panel only in the passenger cabin.

The Toyota Raize cargo space has a 369L which is a spacious luggage capacity for a compact SUV, when more space is needed the back seats can be folded forward to provide a long, flat space capable of storing long items of luggage.

The Raize has a good-looking appearance in the front, the sequential turn lights, and the use of thin LED headlights that appear to flow to the outside from the inside of the car hint at the car’s advanced technologies and it has angular bumper corners that create a powerful frontal appearance.

Toyota Rush is the 2nd generation of Daihatsu Terios which was produced from 2006 to 2018 in the international market. The Rush allows the driver to have a clear sight while driving, with the steering wheel and gear lever wrapped in leather giving them smoothness and a soft feel.

The Rush has ample space to carry 5 adults comfortably and its cabin is roomy. The doors of the Rush open in 3 stages, and entry and exit become simple when fully opened.

The Rush is a slim car and it feels very much so when 5 adults are seated inside. In the driver row, the space is countless with ample space to fully stretch the legs. In the passenger row, the space can comfortably accommodate tall people.

You will find the best storage compartments in the cabin that are good for storing items such as goggles, beverages, smartphones, handbags, etc. In the driver row, there is a glove box, door panel storage, a center box, and 2 cup-holders. For the passenger row, there are the front seat jacket pockets.

The boot space is good enough and roomy to carry luggage for a family of 5. The second-row seats can be folded in a split configuration when more space is required.

Toyota Raize is powered by a 1KR-VET 1.0L I3 turbo, 1198 cc I3 WA-VE petrol engines, and 1198 cc WA-VEX I3 (A202) petrol hybrid. These engines are supported by a 5-speed manual CVT. The 1198 cc I3 WA-VE powertrain produces the torque of a 1.5L-class engine at a diversity of engine speeds, from low speeds upwards, which results in powerful acceleration. The hybrid version is equipped with an 1198 cc I3 WA-VEX (A202) attached with an Electric motor of 78 kW E1A AC synchronous.

While the 2nd generation Rush (3rd generation Daihatsu Terios) is powered by a 1.5L 2NR-VE I4 engine that generates a power output of 103hp (76.5kW; 104PS). This engine is attached to a 5-speed manual transmission or a 4-speed automatic transmission.

TheRush’s fuel economy is around 15.4km/L.

The Toyota Raize and Toyota Rush models are uncountable in almost every detail. There isn’t a bad choice between the Toyota Rush and Toyota Raize rival. Both of these vehicles provide upscale interior trimmings, composed of a comfortable ride, handling, spacious seating space, and are equipped with active safety features. The Rush performs better off-road and rates higher for reliability predicted and while Toyota Raize gives better fuel efficiency in its standard configuration. On the other hand, Toyota Raize feels a bit faster when driving. Which one will you go to? Look at our BE FORWARD.