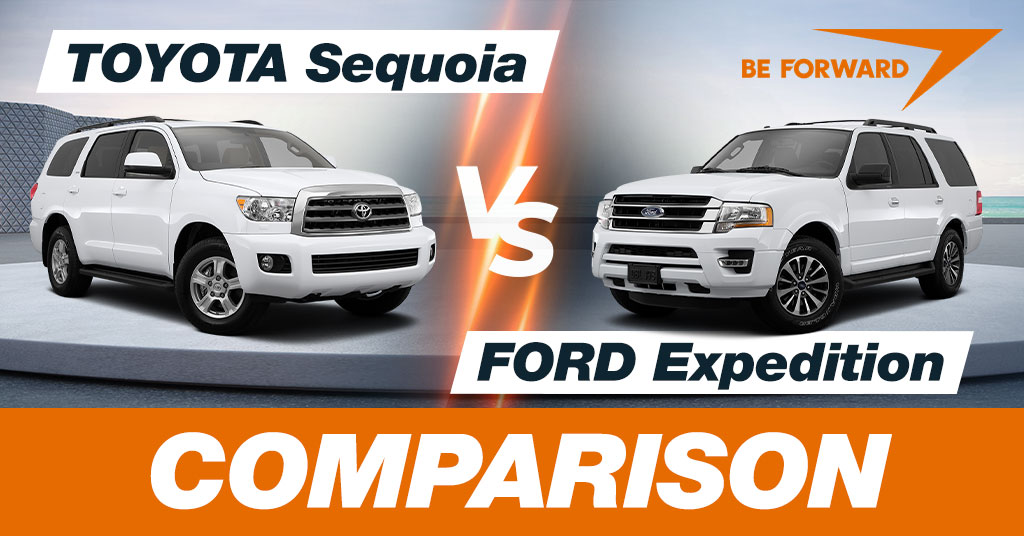 Toyota and Ford are among the best-sellers in the SUV, sedans, pick-up, and Hatchback, vehicles, and both companies have been around for a long time and performing well on the global market.

Every person has his taste in choosing the brand he wants due to some aspects and sometimes interior, external looking, and performance without leaving behind the prices.

In this review the information will help you to understand both vehicles Toyota Sequoia and Ford Expedition in terms of engine capacity, fuel consumption, performance, and interior, exterior. Pass through this to the end and you will come up with which brand to purchase: Toyota Sequoia or Ford Expedition?

N.B: Prices are reflective of average BE FORWARD prices as of April 2022.

The Sequoia is a full-size SUV produced by Toyota and since 2000 sold mainly for the North American market with its design borrowed from the Tundra pickup truck. The Toyota Sequoia is the largest SUV ever produced under the Toyota lineup.

The Sequoia has a large cabin that can accommodate 8 people with enough leg and headroom on each row.

Inside the Toyota Sequoia cabin, you will find several storage compartments that are useful for keeping items such as smartphones, goggles, beverages, and handbags. In the 1st row, you will find a center box, a glovebox, door pockets, and 3 cup-holders. In the 2nd row, there are only door pockets while in the 3rd row there are side panel pockets.

The boot space is average when all seats are occupied but when more space is required the 2nd-row seats can be folded down and make a large space for carrying more luggage.

The Ford Expedition has many storage compartments used for keeping smartphones, handbags, beverages, and bottles. In the driver cabin, there is door panel storage, 2 cup holders in the control panel, a glove box, and the center box. In the passenger cabin, there is door panel storage and in the third row, there are 2 cup holders inside the windows.

The Ford Expedition‘s boot space depends on which model is chosen and how its seats are positioned. If you chose a standard-wheelbase model, there are 19.3 cubic feet to 20.9 cubic feet behind the 3rd row. When the 3rd row is folded down, space increased from 57.5 cu ft. to 63.6 cu ft.

The latest generation of Sequoia is powered by single-engine choices, a 3.4L twin-turbo V6 gasoline hybrid engine attached to a 2NM AC permanent magnet synchronous which generates a maximum power out of 437 hp. This engine is supported by a 10-speed AWR10L65 “ECTi Direct Shift” automatic.

The 4th generation (U553) Ford Expedition comes fitted with only one engine option 3.5L EcoBoost V6 mated with a 10-speed 10R80 SelectShift automatic.

Depending on which model is chosen Ford Expedition’s fuel consumption is between 7.2 Km/L to 9.7 Km/L.

Ford and Toyota have been the best in SUVs, mid-sized and pick-up trucks with plenty of power and interior space but the Toyota has famous SUVs such as Toyota Sequoia, Fortuner, Prado, etc. while Ford has Ford Expedition, and Ford Everest.

Both cars are good but the better choice for towing capacity is Toyota Sequoia which is clearly good for pulling heavy loads over the Ford Expedition.

Most people are inspired by interior space, exterior appearance, and safety features, and disregard fuel-efficient vehicles.
After going through this review, we hope you already have a choice between these two Toyota Sequoia and Ford Expedition but the choice remains yours. You can own one of these brands by visiting BE FORWARD.